The main talking point that is regurgitated every month is that “70% of our economy is consumer spending driven.” If people examined the most recent GDP report they would find that 0.9% of the 3.1% GDP was associated with Personal Consumption Expenditures. That is not 70% of the economy. Last year we had a record retail sales year. This year we were 3% ahead of that pace as of April. We have had record January Retail sales data, record February Sales data and record March and April Sales Data, non-seasonally adjusted. What is expected for May when the May MARTS (Monthly and Annual Retail Trade Survey) data is released this Friday?

The Non-seasonally Adjusted Month to Month data is expected to spike across the board. The largest spikes normally happen in the Miscellaneous sales, Building Material and Garden Equipment (BMGE) sales, Clothing and Clothing Accessories (CAC) sales, Gas Station Sales, and Motor Vehicle and Auto Part (MVP) sales. Last Year the April current month  growth was 4.97%, the rolling year growth was 4.40% and the current Year growth was 2.99%. The spike in April Growth pushed the Annual growth rate up and helped boost the current year growth rate. If you examine the non=seasonally adjusted, blue line, graph you can see an uptick during April. It was projected that there could be a continuation of the downward trend.

May to May Growth is expected in all sectors. Normally Gas Station sales (GASS) sees the largest spike as the Summer Driving Season begins and as the “Summer Blend” is brought on-line. Gas prices have been falling as frackers have been fracking. The other large growth sectors are expected in CAC, Non-store Retail (NSR,) Miscellaneous Sales (MISC, ) BMGE, and Health and Personal Cares (HPC.)

The seasonally Adjusted paints a similar picture. We should expect spikes in GASS, CAC. Food and Drinking Places (FDP,) and BMGE. The May to May data is indicating spikes in GASS, CAC, Non-Store Retail, MISC, and BMGE sales. The April data was only 3.13%, the annual growth was 3.09% and the rolling year data was 4.34%.ors

The net net is that all sectors should grow month to month and May to May, seasonally adjusted and non-seasonally adjusted. We have seen some weakness in Appliances and Electronics (AE)  and Sporting Goods, Hobbies, Books, and Music (SGHBM) may show weakness in their growth. The same could be true for Gasoline sales. The Annual growth rate was only 1.18% and 1.37% during  May 2015 and  May 2016.It could be 3.3% to 3.5% this month, with the Rolling Year Growth between 4.6% and 5.0% and the same month growth popping to between 5.8% and possibly up to 7.5%. We are in a Retail Renaissance. The Retail Ice Age is so 2016. 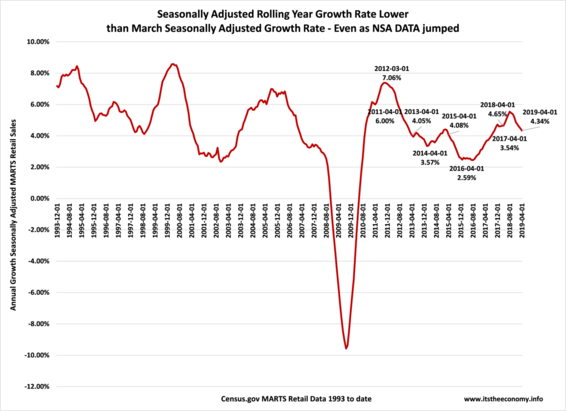 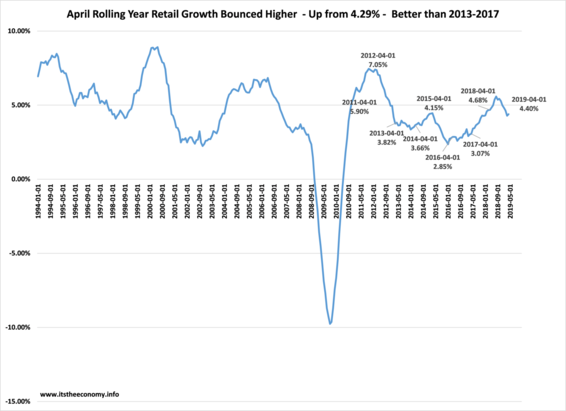