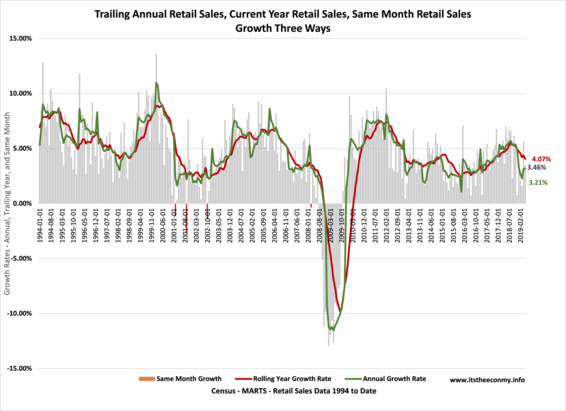 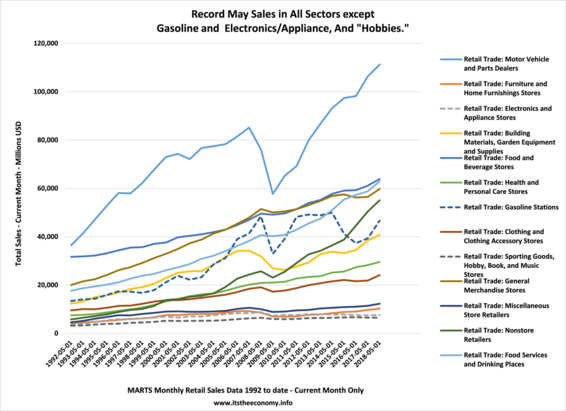 Last Week the non-seasonally adjusted data recorded annual growth of 3.21%, non-seasonally adjusted for the Current Year. This is an improvement from the upward revised 3.13% during April and up from the 2.28% growth during March. The current year growth is accelerating. This month we were up 3.48% over the May 2018 level. The same month growth is pulling up the current year growth rate. Ironically, both are pulling down the trailing year growth rate. We were growing at 5% last year. The Current Year Growth rate should surpass the trailing year growth rate within the next one of two months. The economy is expanding after slowing the strongest growth rate since emerging from the Great Recession. We are in a Retail Renaissance.

This was the best Total May MARTS Revenue Month Ever at $549.391 Billion. All sectors were expected to grow month to month and May to May. All sectors did grow month to month.Not all sectors grew May to May. There was strong growth May to May in General Merchandise Sales, Motor Vehicle and  Auto Parts Sales, Health and Personal Care Sales, and the best growth rate was in Non-Store Retail Sales. It was also the third consecutive month with over a half billion in retail sales. Last year we only had five months with over $0.5T in sales during the entire year.

Three consecutive months with over $500B in retail sales, five best months for current month data this year, and the "gasoline stimulus" in place. We are on track for our second $6T retail sales year.