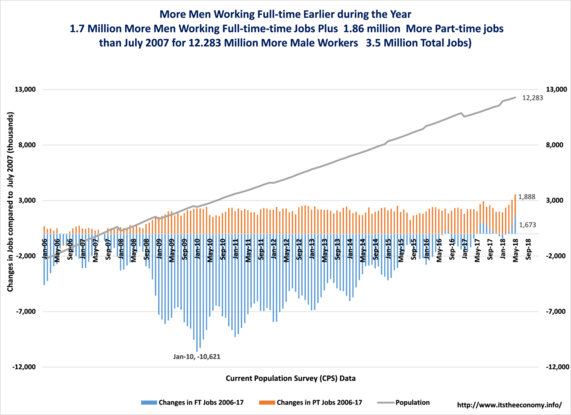 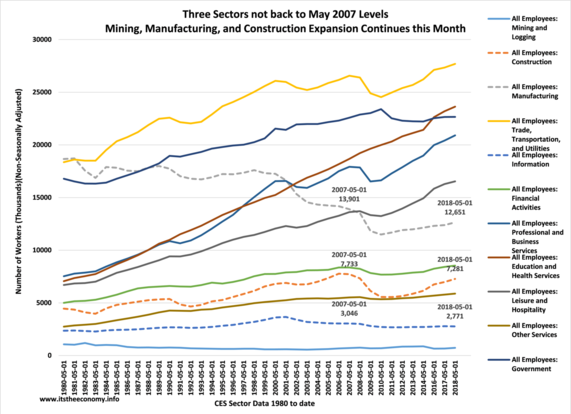 Upticks in Construction, Manufacturing, All  other Sectors

The May Jobs Report was released this past Friday. The data was awesome. The reporting on it by the mainstream media has been good. There was actually some discussion regarding the report after 8:35 A.M. Friday morning. This column has already written four articles on the report:

What was obvious from the "Wages and Workers" article was that we had seen strong month to month growth in all sectors. The question was: "Are we fully recovered from the Great Recession." We have more workers and more jobs than we had during any other period of time in history, so "we must be fully recovered." We have record low levels of unemployment so we must be at "full-employment." This column has written numerous articles on the topic of "Effectively Unemployed" Workers. We are not at full employment until participation breaks through the 65% or 66% level, or maybe 67%. If we aren't at full employment where can the economy grow?

Right now there are three sectors that have not returned to Pre-Recession Worker Levels. The perennial laggard is Information and Technology "Peak Employment" was during 2000 and 2001. It is counter-intuitive with how much computers and technology factor into our daily lives. Construction is down, and rebounding. We had peak construction data during 2006 and 2006. The Great Recession was a Housing Recession. We have not returned to pre-recession construction levels (Starts, Under Construction or Completions) or units sold levels (New or Existing Homes.) We need more workers to build more homes. This is "hammering" ahead to return  record levels. Manufacturing jobs are growing rapidly. Where Former President Obama said that these jobs were not going to return with a magic wand, there seems to be some magic in the NSA CES Manufacturing numbers.

Two sectors are back to Pre-recession levels - not quite at all-time highs. Government jobs peaked during May 2010, at least as it relates to the May data. Mining and Logging  hit a May Peak during May 2014, right before we saw the "gasoline stimulus" come into play. Will higher gasoline prices stimulate more mining and logging jobs, which happen to be high paying jobs, and drive even higher the earning power of the United States?

The rest of the sectors are at All-Time Highs. Let that absorb. Trade, Transportation and Utility is the top sector, then Education and Health Services (EHS,) then Government, then Professional and Business Services (PBS,) and then Leisure and Hospitality (LAH.) The problem is that TTU, LAH, and EHS are three of the four lowest paid sectors in the economy (see Wages and Workers article.)

The surge in Mining and Logging, Construction, and Manufacturing can be seen in the Male Full-time Jobs Numbers. There are some sectors that are still male dominated sectors. Remember that there are more women in the workforce than men. Remember, more women work part-time jobs than men. More men work full-time jobs than women. There is a gap of ten million male workers between the number of jobs added and the number of male workers added since July 2007. We have seen recent increases in new construction data. Construction workers earn more than Leisure and Hospitality Workers. Wages should continue to rise. If more people work higher paying jobs then total wages will rise quickly. As total wages rise, retail sales will rise, home sales should rise, and retail sales will rise even more than they already have been rising. All sectors are growing. Three sectors still have room to grow to finally from the Great Recession.