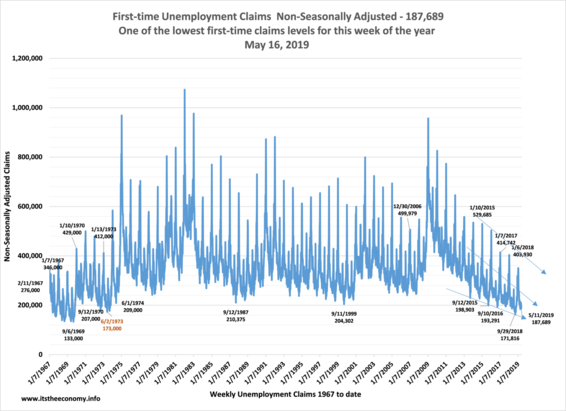 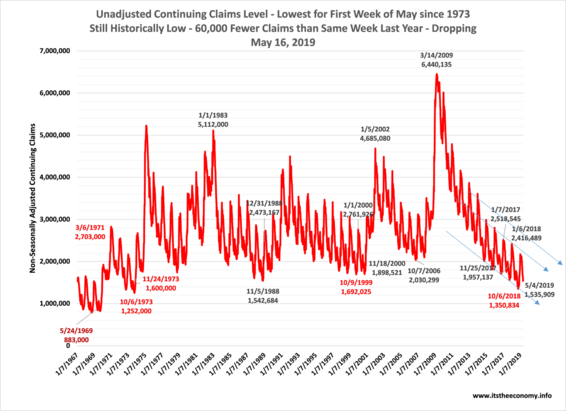 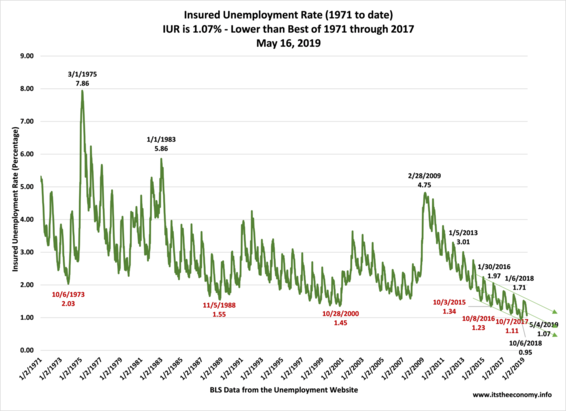 The Weekly Unemployment Claims Data has been remarkable.

The weekly unemployment claims data used to be headline news at the bottom of the hour most Thursdays prior to the 2016 elections. The media missed last year's record 21 weeks with the Non-seasonally adjusted (NSA) First-time Unemployment (FTU Claims being recorded under 200,000 claims. They missed the two year anniversary of the seasonally adjusted (SA) continuing Claims under 2 million claims. They haven't a clue about how low the insured unemployment rate is. They are too obsessed with the Job Openings to U-3 unemployment number comparison. What happened this week?

The seasonally adjusted first-time claims number was just 212,000 claims. Remember that anything under 300,000 was considered healthy under former President Obama. We have already had two weeks this year with the SA FTU under 200,000 claims (April 6, April 13.) This is the lowest SA FTU for the second week of May since May 1969.

The non-seasonally adjusted continuing claims level dropped to 1.536 million claims.  The most recent low was 1.542 million claims during October of 1988 until that record was shattered during 2018 when we dropped as low as 1,350,834 claims during October of 2018. This is fewer continuing claims than we had during the May 5, 1973 recording period when there were 1.539 million NSA CC and 56.359 million covered insured.

Technically, the weekly claims data is considered a "lagging" economic indicator. I would argue that it is a "leading economic indicator." It is a concurrent economic indicator, at the very least. This is data from one data set. The official U-3 unemployment data is from the CPS (Current Population Survey) jobs and unemployed worker data set. The "Jobs" number is from the CES (Current Employment Statistics) worker and wage data. The JOLTS data is comparable to, and different from, the CES worker data. The trend lines for the NSA FTU, NSA CC, and NSA IUR are all pointing to lower and lower values. This should mean that the May Jobs number should record a drop in unemployment and an increase in jobs and workers.This is why it is at l;east a concurrent indicator if not a leading indicator. Next week we will receive the NSA CC value that will be collected closest to the CES and CPS collection dates. How low can we go?