The War on (Wo)Men continues

There are many ways to examine the Jobs Report Data. The October Employment Situation report was released this past Friday. It was thought that we would see a spike in Seasonally Adjusted (SA) Workers, the Current Employment Statistics (CES) data, and a drop in SA Jobs, the Current Population Survey (CPS) data. It was also projected that we would see a drop in  the seasonally adjusted and non-seasonally adjusted U-3  unemployment level. There have already been three articles written on the data in the Jobs Report:

This recovery has not been even. Men lost over 10 million full-time jobs at the depth of the recession. Men have seen their workforce population grow by 11.4 million workers since July 2007. It took until the Summer of 2016 for all of those lost full-time jobs to be recovered before they started slipping away, again. One of the talking points during the 2012 election was the "War on Women." The real war has been on male dominated job sectors and full-time jobs for men.  So what happened this month?

Men Used to Participate at 73.52% - Now 68.95%. This is the numbers, the Effective Unemployment Rate. The authors of most reports rely upon the seasonally adjusted data. When seasonally adjusted data from different seasons are compared FACTs (False Assertions Considered to be True) are generated. While the male unemployment is virtually identical to that from October 2006, the participation rate is 4.57% lower now then it was then. We have more men who are not working and "not unemployed"  than there are unemployed workers. If these missing men were added to the unemployment ranks then the U-7 unemployment rate would be 9.91%. 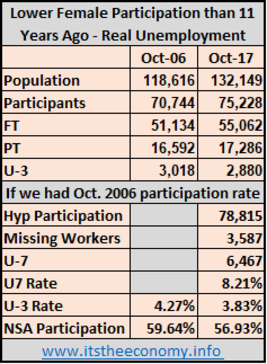 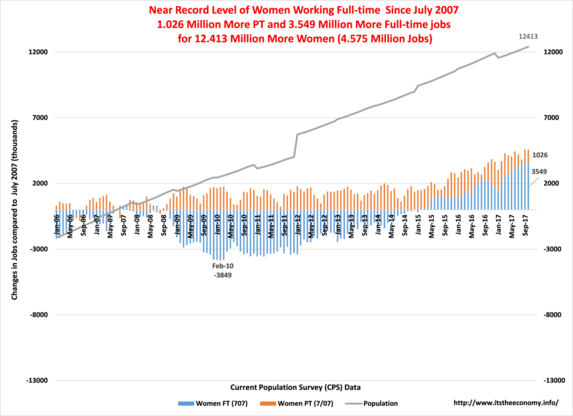 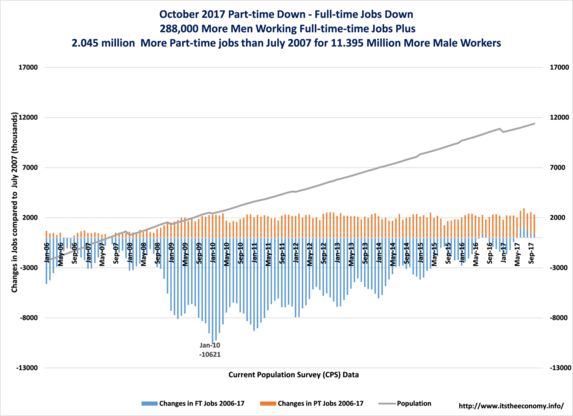 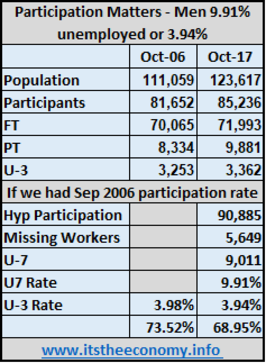