The June Jobs Report, or Employment Situation Report, was remarkable. We have a record level of Full-time Jobs (FT) and a record level of combined FT and Part-time Jobs (See "June Jobs Report Records Record Employment, Jobs" ). We saw the worker data rise dramatically, non-seasonally adjusted, and improve nicely seasonally adjusted. Wages were up 3.84%, non-seasonally adjusted, while workers were up 1.65% and hours worked were up 4.87%. When all of this growth is combined gross wages were up 6.60% (See "June Workers, Hours Worked, and Wages Rose.") President Trump has overseen the creation of the most FT jobs during the first 29 months of a Presidency since 1981. Only he and former President Clinton have added FT jobs while cutting unemployment during their first 29 months in office. (See "Five Presidents at 29 Months: Jumping Junes.") How are men and women doing compared to prior to the Great Recession?

Men lost more full-time jobs than women during the Great Recession. Men lost 10.621 million full-time (FT) jobs between July 2007 and January 2010. Women lost 3.849 million full-time jobs. The thing to remember here is that during June of 2007, the month prior to peak employment/peak jobs, there were 71 million men working FT jobs and 51.2 million women working FT jobs. Men were working 8.2 million Part-Time (PT) jobs while women were working 16.6 million PT jobs. It was not until the Summer of 2016 that men recovered all of their lost full-time jobs, for the first time. These lost jobs were recovered and lost again during 2017. These full-time jobs were recovered once again during 2018 and were maintained.  Right now there is a record level of men working according to the Current Population Survey (CPS) jobs data.

Best form of unemployment insurance is a second job.  The level of total multiple job workers (Multiple Job Holders, or MJH) approached 8 million workers this month. This is the second highest June level of multiple workers since the data was collected. We set the record of June MJH during June 2002 when we hit 8.214 million MJH. This month we had 7.987 million MJH. It is important to note that we had a June Record Level of Dual Part-time Job workers (PT PT.) There were 4.340 million people working FT PT, 2.052 million working PT PT, 330,000 working FT FT and 1.265 million people who workers variable hours, or possibly PT FT. When, if, someone loses one job they still have the other. They do not get unemployment benefits even if they lose a full-time job.

The breakdown of multiple job workers by gender resembles the "regular" CPS data for FT and PT jobs.

Unemployment was the lowest for the month of June since June of 1999. The unemployment level during June 1999 was 6.271 million. The level this month was 6.292 million. We have more than 21,000 more  people working FT jobs after 20 years.To find a lower NSA U-3 you have to look to June 1974 when we had 5.459 million unemployed workers. There are 929,000 fewer unemployed men this June compared to June 2007. There are 329,000 fewer unemployed women compared to June 2007. Do not confuse the U-3 unemployment level with the weekly claims data. The U-3 measures people out of work who are actively looking for work. The continuing claims data measures those who are out of work, who are looking for work, who recently lost a job that qualified for unemployment benefits. Big difference. 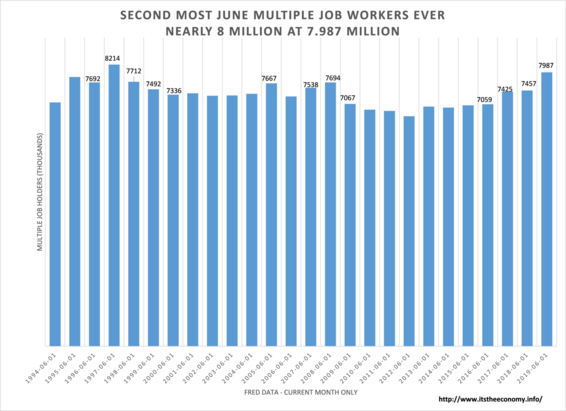 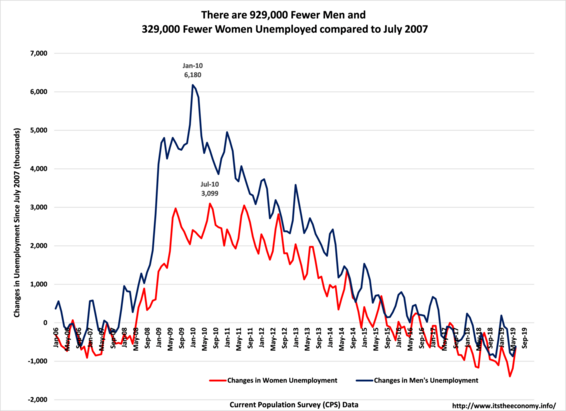 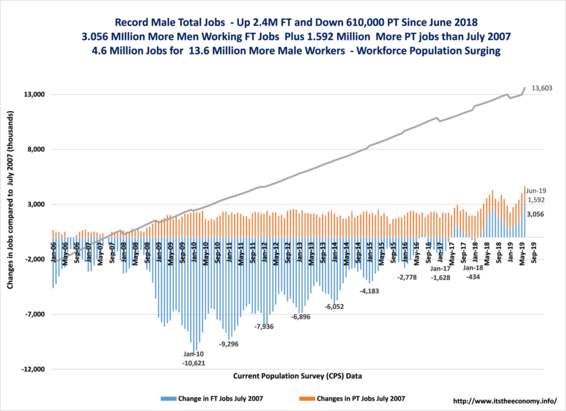 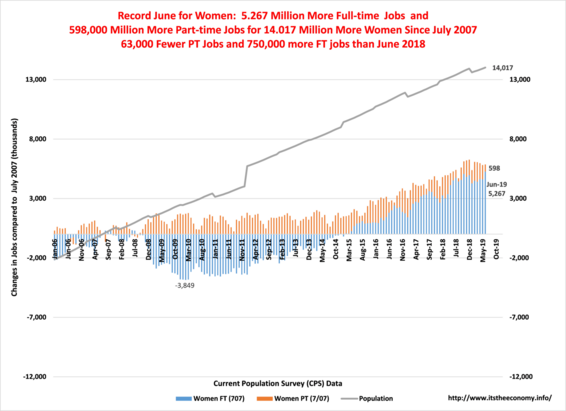 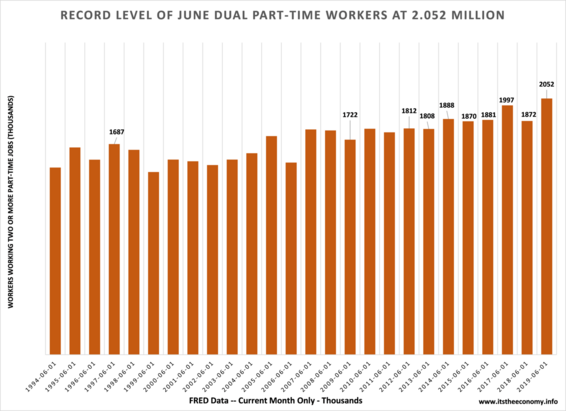 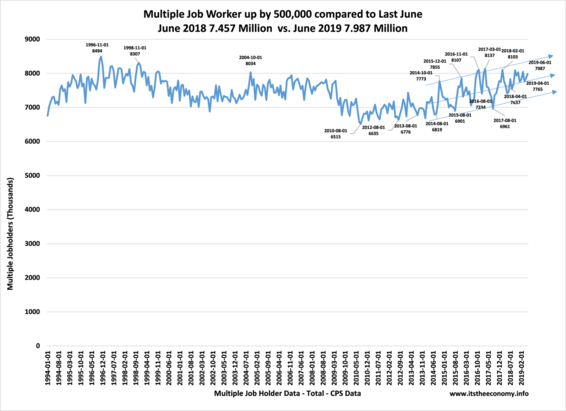