Fire up Some "Men at Work" Music

The May Monthly Employment Situation Report, or Jobs Report, was released June 1, 2018. The report revealed that a record level of May Full-time Jobs were created this year. It also revealed that the non-seasonally adjusted unemployment rate was the lowest May U-3 unemployment rate since May 1969. There are many ways to examine the data. This column has addressed the full-time and part-time job changes and the worker changes in the first article. There have been discussions regarding rising wages addressed in "May Wages Up, May Workers Up." The data for President Trump has been compared with Presidents Reagan, Clinton, George W. Bush, and Obama at the 16 month point in their Presidency with "Five Presidents at 16 Months." What has been ignored by most analysts is that Men lost more jobs during the recession than women lost. Men lost more full-time jobs than women lost. Women have recovered from the recession faster than men have recovered. Where are we right now?

Men are Climbing the Jobs Mountain.  This column "discovered" a jobs iceberg when looking at how the jobs situation had changed with regard to the destruction of full-time jobs and the creation of part-time jobs. The jobs iceberg compares full-time and part-time jobs levels, the non-seasonally adjusted (NSA) Current Population Survey (CPS) data, with the full-time and part-time job levels during July 2007. July 2007 was the pre-recession jobs peak. Men lost more than 10 million full-time jobs by January 2010.  May is hiring month. Men added 920,000 NSA Full-time (FT) jobs and trimmed 428,000 NSA Part-time (PT) jobs. They had a net gain of 492,000 NSA jobs.  Their workforce population only increased by 91,000 jobs. More jobs than workers!

Women continued to climb the jobs mountain. Women recovered and kept all of their lost full-time jobs as of the Fall of 2015. Men recovered their lost full-time jobs during the Summer of 2016, lost them during the Fall of 2016, recovered and added to them during the Summer of 2017, and lost them, again, during the Winter of 2017. Women have been expanding their jobs base, climbing the jobs mountain, and have experienced only minor seasonal full-time job losses. Women added 754,000 NSA FT jobs during May. Women trimmed 584,000 NSA PT jobs. They saw a net gain of 170,000 jobs this past month.

Participation matters.  We used to have a 73% participation rate for men and 59% participation rate for women. Neither participation rate is back to pre-recession levels. We know from the "Red, Gray and Blue" series that our workforce is aging and that out younger workers are not participating in the economy, as of the April data.While 10,000 people may be turning 65 every day of the year, 10,000 people are not retiring every day of the year. We would be losing 300,000 workers a month. We will find out later this week how the jobs and unemployment data breaks out across age ranges, We will also get an opportunity to see which sectors have fully recovered from the recession and which have not. We will also get a chance to see what is happening with the multiple job worker. Men and Women are winning. Should we cue up some "Men at Work" and "Overkill?" Maybe some Chris Rea and "Workin' on it" or Huey Lewis and the News "Working for a Living?" 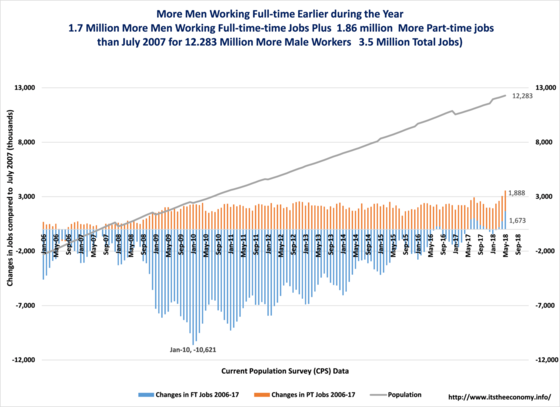 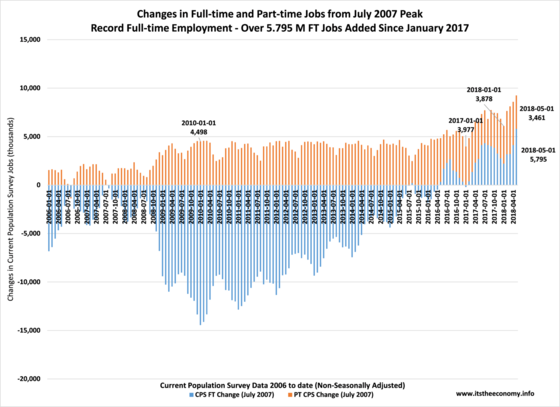 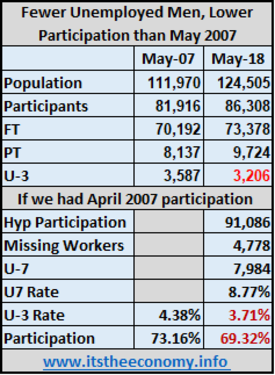 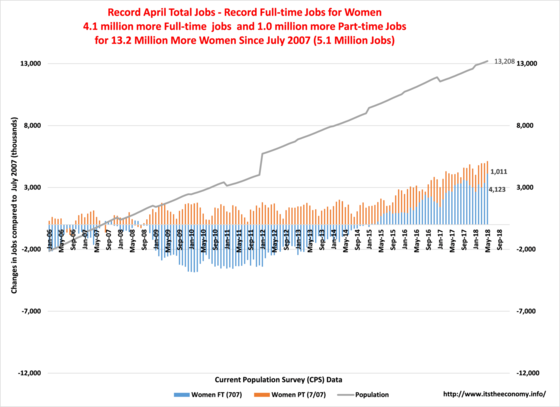 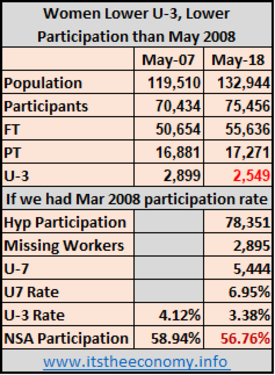