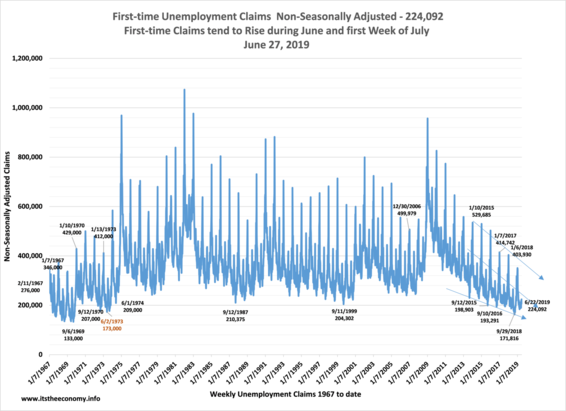 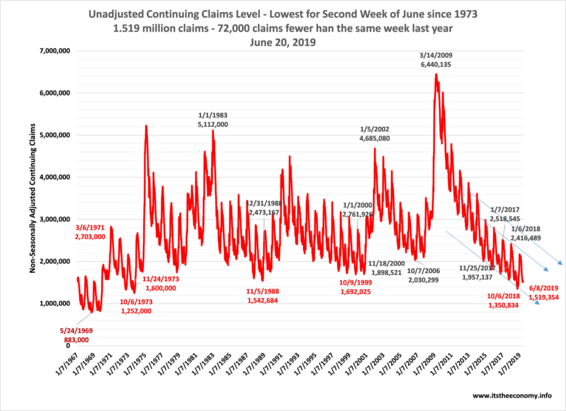 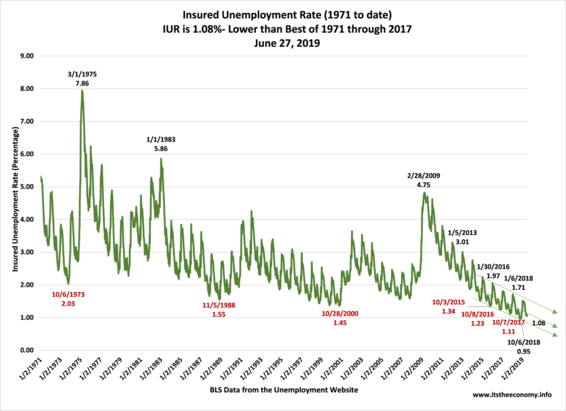 What Used to be headline news is actively ignored.

The headline data is the seasonally adjusted (SA) first-time unemployment (FTU) claims number. The SA FTU has been 300,000 claims or less since March 7, 2019. The non-seasonally adjusted (NSA) FTU value has been below 200,000 claims nine times this year, more than 2015, 2016, and 2017 combined. The Continuing Claims data is generally ignored. The NSA CC value normally slides through the end of September and the first week of October. The SA CC value has been under 2 million claims since April 1, 2017. The Insured Unemployment Rate (IUR) is the percentage of the covered insured who are receiving continuing claims. That value hit an all-time low of 0.95%, non-seasonally adjusted, last October. We are at a lower IUR this year than the same week last year. What happened this week?

Non-seasonally adjusted first-time unemployment claims came in at 224,092. This is the fourth week of a five week claims month. The data indicated that even though first-time claims have ticked higher the past four years during the fourth week of June, there was the possibility of a slight decline. Either was it was anticipated that the SA FTU could be below 220,000 claims and possibly under 210,000 claims.

The headline seasonally adjusted first-time claims data came in at 227,000 claims. The seasonal factors used for this week of the year mean that they could have been reported higher or lower than they were reported. The under 300,000 SA FTU claims "streak" continues. Remember that the Obama streak FACT was a False Assertion Considered to be true (FACT.)

The "headline" seasonally adjusted claims data came in at 1.688 million. This was a slight uptick from 1.666 million last week. It could have been reported as low as 1.656 millions claims. We are still trending lower year over year. Some consider unemployment claims a trailing indicator. I believe that this data is a leading indicator, or at least a concurrent indicator.

The weekly claims report used to be "headline news at the bottom of the hour" most Thursdays. If and when the economy starts to slow down we will first see it in the unemployment claims data. There will be some who jump the gun when the data is consistently higher than the prior year data. They will have to be reminded that we have record levels of workers, jobs, and covered insured. Will the media cover record low levels of unemployment claims or continuing claims this October? Will the number of weeks of non-seasonally adjusted unemployment claims under 200,000 claims be ignored again?