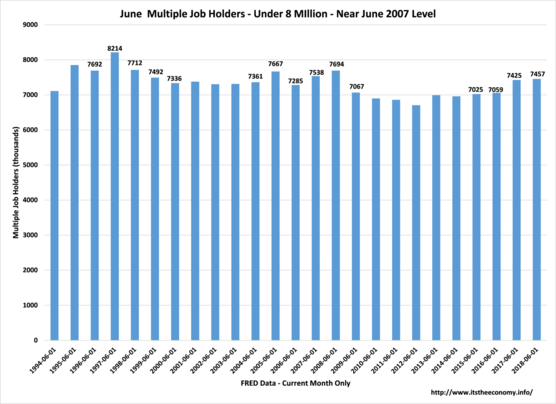 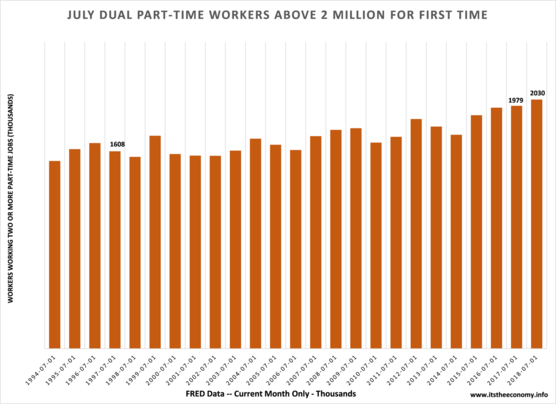 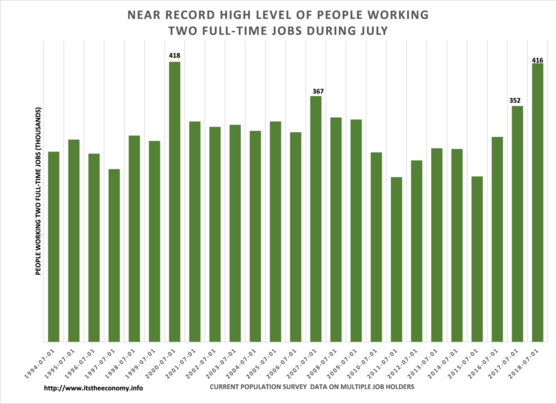 The July Jobs Report was released this past Friday. Some people were confused by the jump in the Seasonally Adjusted Private Sector Worker number, and some were confused by the weaker Non-Farm Payroll Number. Some tried to soft-pedal the number saying it was disappointing, on one hand, and good because the May and June data were revised higher. So far this column has written the following articles:

One of the items that receives very little attention, and it should receive more attention due to its impact on the U-3 unemployment number, as well as the weekly claims data, is the sheer number of people working two jobs.  The multiple jobholder data is a Current Population Survey (CPS) component and can be found in Table A-9 and Table A-16. This July we set a record for the number of people working two part-time jobs. What else happened?

There were 7.457 Million people working multiple jobs this July. This level of multiple jobholders was the highest that it has been during the month of July since 2008, and comparable to what it was during July 2007. We have seen months where there have been over 8 million multiple jobholders, just not during July. The thing to remember during this discussion is that multiple jobholders have no impact on the participation rate. The participation rate is the number of unemployed workers (U-3) plus the number of Full-time (FT) jobs and Part-time Jobs (PT,) all divided by the workforce population. People working two FT jobs, two PT jobs, or a combination of FT and PT jobs are all subsets of the overall FT and PT job levels.

There were over 2 million people working two Part-time Jobs - A July Record. The thought here is that as companies expand they hire part-time workers first, convert them to seasonal full-time jobs, then eventually hire those employees full-time permanently. Two jobs is the "ultimate" unemployment insurance policy.  This makes sense from a Summer Job perspective. People will work multiple jobs during the Summer, especially in the Leisure and Hospitality sector.

The number of dual job workers has been rising for years. It is thought that some of this is due to a lack of workers. It is thought that some of this was the growth in part-time jobs after the adoption of the Affordable Care Act which redefined a full-time job as working 30 hours or more a week, and the work year being 2080 hours. The CPS data still counts a FT job as working 35 or more hours a week. Some companies may be choosing to hire full-time employees, not provide health care insurance, and pay a penalty. The Kaiser Foundation has produced an annual study that detailed the drop in employer provided health care and the changes in cost sharing. This column wrote an article on that report during October of 2016.

Did the adoption of the ACA cause a shift between permanent and temporary/seasonal help? Did more people start working overtime because overtime hours are not counted toward the full-time equivalent hours (FTE) level of 2080 hours per employee? Is this a labor shortage situation?

Participation is improving. Jobs have been rising. There will be a drop in the non-seasonally adjusted jobs data for full-time jobs that will be seasonally adjusted higher. We are on track for one of our best NSA Current Employment Statistics private sector worker growth years, even with the massive revisions to the data. There is a considerable amount of data that is actively ignored or forgotten once Jobs Report Release Day sees the sun set. This month we saw strong revisions to the May and June Data. We saw "across the board" worker growth. We saw non-seasonally adjusted unemployment drop to a level not seen since July 2000. Men are coming back to work. Older workers are working longer. Wages are up. President Trump had a remarkable first 18 months in office.