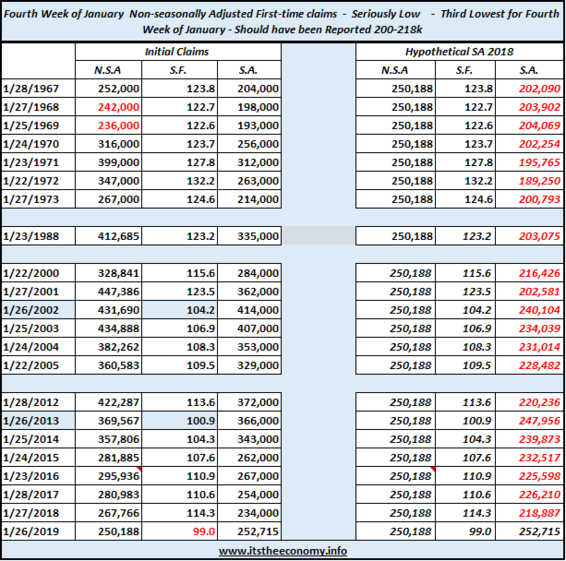 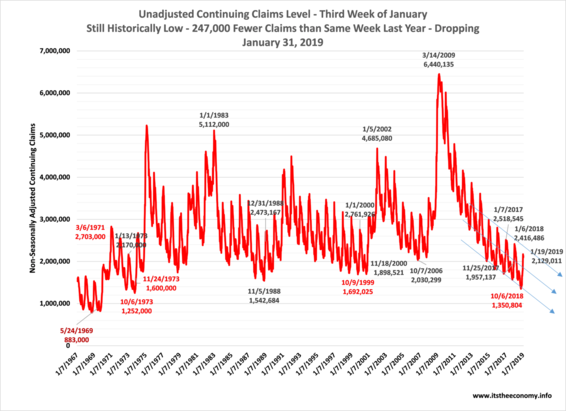 The headline seasonally adjusted (SA) first-time unemployment (FTU) claims was reported at 199,000 claims last week. This barely was mentioned in the media. The confetti used to fall when the SA FTU claims dropped below 300,000 and stayed below 300,00. Continuing Claims are lower than they have been this early during a year since January 1970. The  "covered Insured rate (IUR)" was 1.46% for the second week of January - the lowest it had ever been for the second week of January.

It was projected that then  first-time claims data, non-seasonally adjusted, NSA, could drop 19% to 23% and  the SA FTU could rise. There was an outside chance that the NSA FTU could drop below 200,000. We did not see this until February 24th last year. We had 21 weeks below 200,000 NSA FTU last year.  It was also projected that the continuing claims level could be reported under 1.7 million claims. We set a low of 1.35 million claims last year. This year we are already 80,000 claims lower than where we were during the second week of January 1970. October of 1970 our low was 1.25 million claims. We could challenge that level this year. What was recorded, NSA, and what was reported, SA this week.

The Non-Seasonally Adjusted First-time claims data fell from 269,757 to 250,188 claims.  This drop was a little less than anticipated. You have to look back to the fourth week of January 1969 to find a lower NSA FTU for the same week of the year.

The Non-Seasonally Adjusted Continuing Claims Data was recorded at 2.129 million. This was a slight uptick from last week's 2.09 million and still lower than the January 5th value of 2.172 million claims. We saw NSA CC jump 3.87% last year. This was a pop of 1.87%, slightly more than the 1.27% recorded during the third week of January 2016. It is very important to note that this is still 247,227 claims fewer than the same week last year. The data for 1/19/19 was comparable to 1/20/1973 with 85 million more covered insured.  This impacts the Insured Unemployment Rate.

The Seasonally Adjusted Continuing Claims data was reported at 1.789 million claims. the SA CC value could have been reported under 1.7 million.  This is also comparable to the third week of January 1973 data.  The comparison table is here.

There were 25,419 Government First-time Claims during the week ending January 12th. This is interesting because it has been a week since the end of the Government Shutdown.  We may not see anything in the claims data for Government workers for two more weeks of reports. The Continuing claims data should start declining considerably from the rehiring of 38,000 or more people to the government. There were:

Will all of these continuing claimants fall off the chart next week? Possibly. Nothing is Guaranteed.

Some weeks up is down in Governmentland. This week down was up for the first-time claims data. We are doing better this year than last year for both the NSA FTU claims data and the NSA CC data. We are almost doing better than any other year at his time of the year. When population changes are brought into the discussion then the data is about as good as it can get.... until next week... until the end of September.... until.... 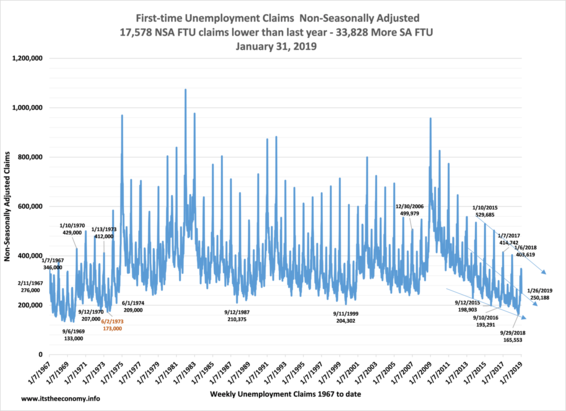