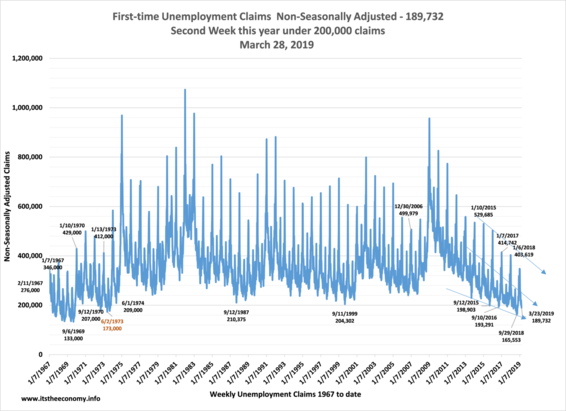 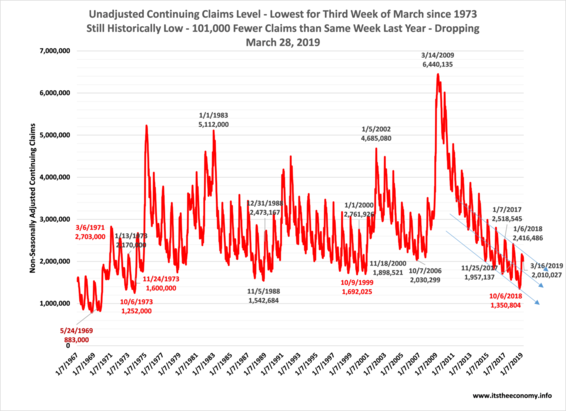 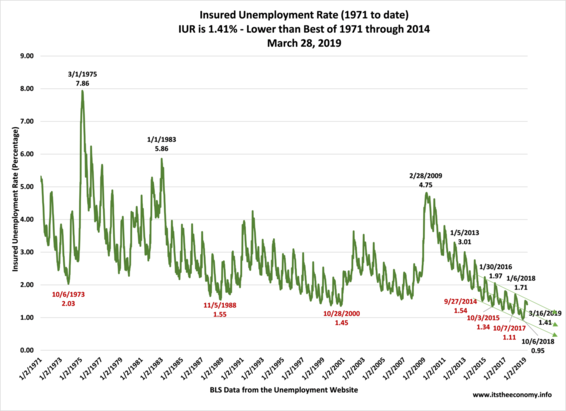 Last Week we had our first week this year where the non-seasonally adjusted first-time claims data was under 200,000 claims. This week is number two.

We have seen four years of seasonally adjusted (SA) first-time unemployment (FTU) claims being reported at or under 300,000 claims, with a "streak" that started March 7, 2015. Last week we saw the non-seasonally adjusted (NSA) FTU claims data recorded under 200,000 for the first-time this year. We are approaching the two year anniversary of the SA Continuing Claims data being reported under 2 million claims. That anniversary will be April 22nd this year. Last year we recorded our lowest ever Insured Unemployment Rate (IUR) of 0.95%. All of this data should be familiar to you. What was recorded and what was reported this week.

The Seasonally Adjusted Data was revised back to January 11, 2014 and the non-seasonally adjusted data was revised back to December 2017. This important. Some of the data that saw no non-seasonally adjusted revisions fall during the current streak of weeks with claims under 300,000, specifically September 2, 2017. The NSA FTU was recorded at 250,621 when it was last reported September 21, 2017. That meant that the SA FTU was 298,00, under 300,000. The new values are 250,627 and 300,000 respectively. A change of 6 claims rose the SA FTU by 2000 claims. There are more instances similar to this. The streak is alive - just barely. Similar revisions were made to the NSA CC data from December 2017 to date and SA CC revisions from January 11, 2014 to date.

The non-seasonally adjusted first time claims data recorded 189,732.  It was projected that the non-seasonally adjusted first-time unemployment claim would remain under 200,000 this week. The data indicated that the first-time claims could grow or drop by roughly 2.5% week to week and that he seasonally adjusted FTU should be reported roughly between 209,000 and 219,000 claims. This was the second week this year with the NSA FTU under 200,000 claims. This was the lowest level of NSA FTU for the fourth week of March since March 22, 1969.

The seasonally adjusted continuing claims data remained below 2 million claims.  The "headline value" was 1.756 million claims, an increase of 13,000 claims from last week and 1000 claims lower than it was two weeks ago when it was 1.757 million claims. The NSA CC and SA CC values are comparable to the same week of March 1973 when we had nearly 90 million fewer potential claimants.

The insured unemployment rate came in at 1.41%. This is the percentage of potential claimants who are receiving benefits. The pre-recession low was 1.45% during October of 2000 when it hit 1.45%. We stayed above this level from 2000 through 2014 and into the Fall of 2015 when it dropped to 1.34%. Last October we set the all-time record low of 0.95%. We may shatter that record this October.

The jobs market is strong. We had a February record number of full-time jobs this February. This column has proposed that the reason why unemployment claims had been falling during the past decade was that people were dropping out of the market, they were working more part-time jobs than was normal prior to the recession, and they were working more multiple jobs than prior to the recession. Multiple job workers are not eligible for unemployment claims, and neither are part-time job workers. We will first see weakness in the jobs market when the weekly claims data begins to rise, when compared to the same week data, especially over a period of time.  We are in uncharted territory.