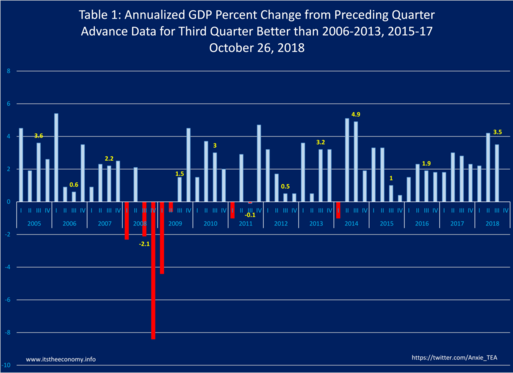 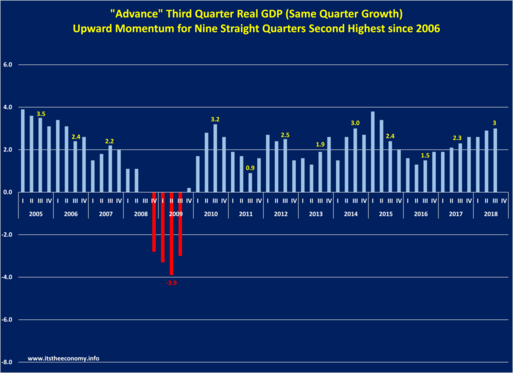 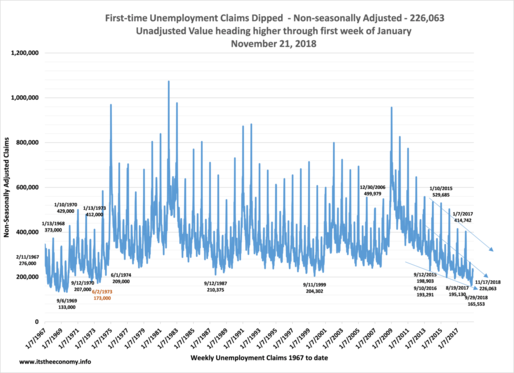 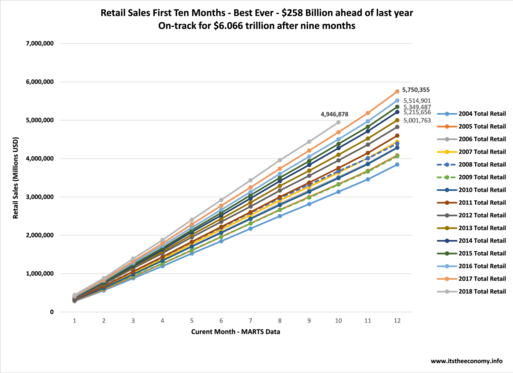 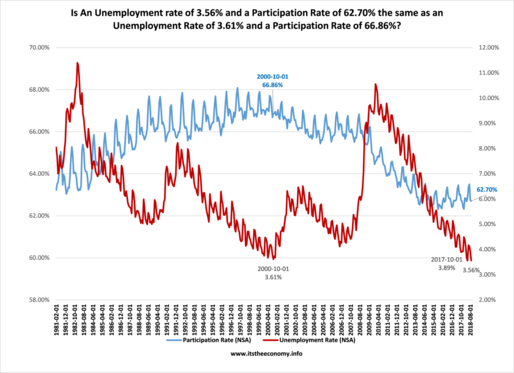 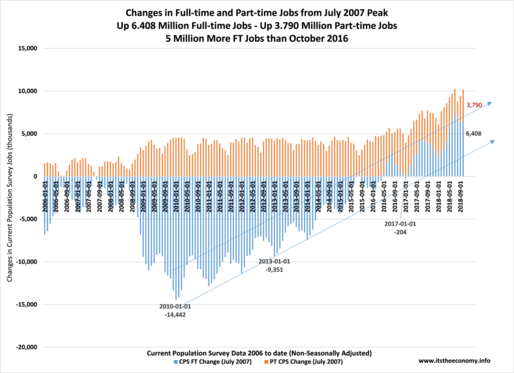 Media Meltdown during the Economic Melt-Up

The Mainstream Media (MSM) has been in Trump Meltdown mode since the election results rolled in for President Trump November 2016. The market was going to crater. We were on the verge of a global recession. The "Economist" ranked a President Trump Presidency as a top ten global threat during March 2016. The economist Paul Krugman was the King of Doom and Gloom projected on Election Night that the Global Markets would never recover from a Trump Presidency. Fast forward to this year when the concern was that we would see 3 interest rate hikes this year and two next year. Someone at Goldman Sachs got it in their head that the Federal Reserve would boost rates five times this year. Now there is talk that we may see four rate hikes this year and three or four more next year. Why is the "market" and the "MSM" cheering for a decline in the economy? I have no idea. We need to see two consecutive quarters of negative growth to be in a recession, by definition. The question is is this "same quarter declines" or "Quarter to quarter declines?" The Gross Domestic Product (GDP) is a lagging economic indicator. It covers a quarter of growth that happened in the rear-view mirror. This data is revised every month and every year, and then so more. This year the data was revised back to 1929. Most people ignored the revisions. This column published the article "Grossly Revised Gross Domestic Product" that detailed how the data was revised and President Trump's first quarters were revised lower than originally reported last year. This column has repeatedly said that the "fear of a recession" is unfounded. This article will be clear as to why this does not appear to be a real concern at this time.

There are four components to the GDP we need to monitor. There is a considerable amount of attention paid to the Personal Consumption Expenditures component of GDP. The second component , Gross Private Domestic Investment, has also received considerable attention. Imports and Exports are the third component. Government consumption is the fourth and final component.

Retail Sales are on a record Pace this year. Again. We are not in a Retail Ice Age. We are in a Retail Renaissance. We have already had 4.9 trillion dollars of total retail sales, non-seasonally adjusted, this year. This is comparable to the 5.001 trillion dollars in retail sales we had during all of 2013. We have sold over $6 trillion in retail goods during the past twelve months. We are moving into "Peak Retail" for this year. We are on track for a year end total of roughly $6.07 trillion.

We have the most full-time jobs ever during the month of October. We lost over 14 million full-time jobs between July 2007 and January 2010. July 2007 was the "Peak Jobs" month prior to the recession of 2008. We almost eclipsed the total number of jobs that we had during July 2018 this October. We had a record level of October jobs, non-seasonally adjusted, this October.

Jobs Openings do not really exceed the number of unemployed workers. This is a statistically disingenuous comparison. The JOLTS Job Opening data is closest in comparison with the Current Employment Statistics worker data. The unemployment data comes from the Current Population Jobs Survey data.  They might as well compare the jobs openings data with the number of people who are receiving continuing unemployment benefits. The sectors with the highest job openings are in the industries with the highest levels of quits, the highest levels or hiring, and, for the most part, the lowest weekly wages.

"Peak This, Peak That." Peak jobs. Peak earnings. Peak Oil. Peak GDP. We were told by Team Obama that we could no longer expect anything better than 2.0% annual GDP growth during 2014. We are not at "Peak Construction" nor "Peak Home Sales." It takes time for those people who lost their homes during the Housing Recession to qualify for mortgages. A pause is not an end to growth. We saw "Peak Home Sales" during the Summer of 2005 and peak "Existing Home Average Sales Price" during the Summer of 2006. Now we are "past peak" average sales price for new and existing homes.

A recession is a contraction, not slower expansion. The momentum is higher for same quarter GDP growth. This metric has risen since the second quarter of 2016. We are growing faster than we were this time last year, which was faster than the third quarter of 2016. The recession was in the making for a long time when it hit during 2008. There was slowing in the number of new and existing homes that were being sold. We will be receiving the first revisions to the advance third quarter GDP this week. It will still be positive.

So far the retail sales data is the strongest that it has ever been. This will drive the rest of the market higher than it already is. The gross private domestic investments data will be critical to observe during the fourth quarter. Right now the employment data is better than it was this time last year, the unemployment situation is better than it was this time last year, and they are receiving higher wages, the economy should continue to grow. There is nothing that indicates that a recession is imminent this quarter or for 2018Q4. This means that a "recession will not occur" at least until after July of 2019, because two quarters of negative GDP are required for a recession to be "called." Remember that all of the GDP data is seasonally adjusted. Remember that this column "lives, breathes, and dies" the non-seasonally adjusted data. 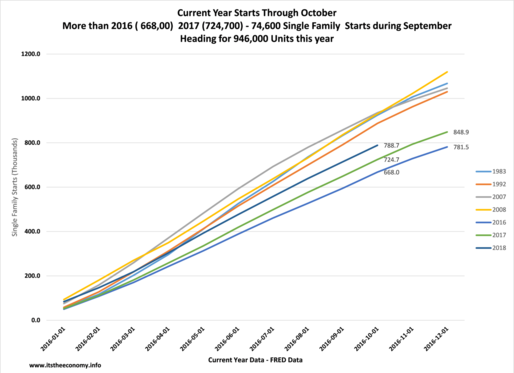