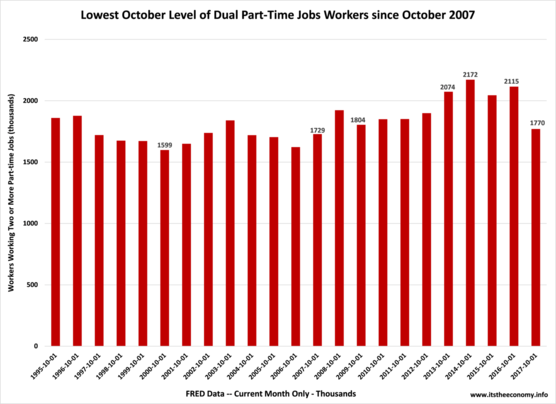 The October Jobs Report was released this past Friday at 8:30 am. That report was largely forgotten by 8:30 Saturday morning. The story was that the creation of 260,000 "jobs" was a letdown because "economists were expecting over 300,000 'jobs' to be created." The headline number is the seasonally adjusted (SA) Current Employment Statistics (CES) workers number. The true jobs number is the Current Population Survey (CPS) number that measures the number of full-time and part-time jobs gained or lost, as well as the number of unemployed workers. This column projected that we could have seen between 50,000 and 250,000 workers added during October. The SA Private Sector worker number. We recorded the second strongest ever monthly job growth spike during October, growing ,at 0.48% or 246,000 Private Sectors workers. We also saw unemployment drop, as projected. The article "Five Presidents at Nine Months" detail how President Trump has overseen the largest addition of NSA CES Private Sector workers of the past four two term Presidents, Reagan, Clinton, George W. Bush, and Obama. It also detailed how President Trump has added more full-time workers than his predecessors and cut the number of unemployed workers more than his predecessor had.

Seasonal variations occur in the labor market. This is the reason that the "official Jobs number" is a seasonally adjusted worker number. The :jobs streak" is still alive - according to the revised seasonally adjusted data. Jobs are up over last year. The CES worker growth rate is larger than last October's NSA CES growth rate. Unemployment is down. Fewer people "have to work" multiple jobs. 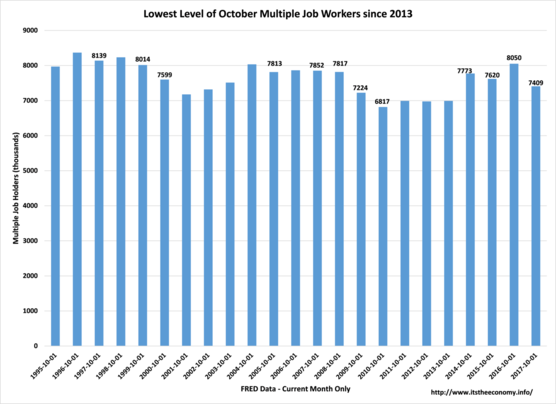