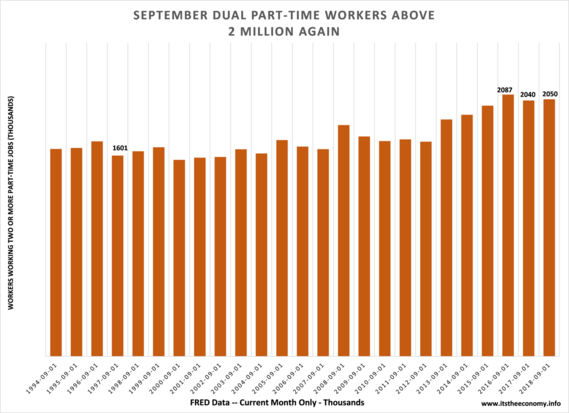 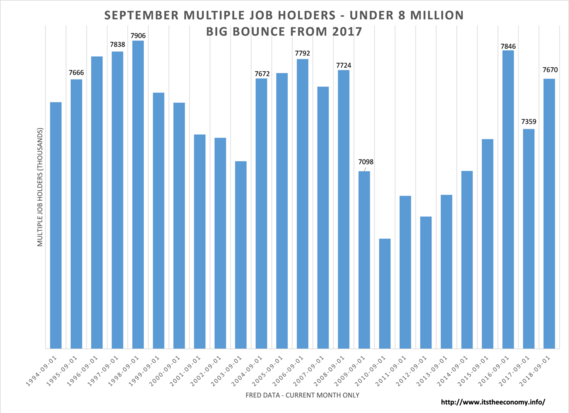 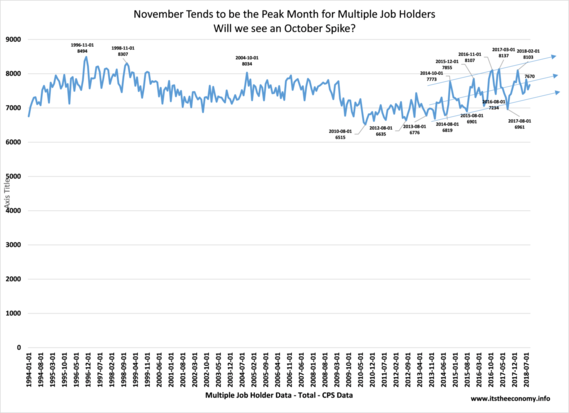 The September Jobs Report, or employment situation report, was released amidst the drama of the Brett Kavanaugh confirmation process. The seasonally adjusted (SA) Current Employment Statistics (CES) private sector number was a gain of 121,000. This normally would not be a great number. The August data was revised up by 69,000 workers which meant that 190,000 SA private sector workers were added to the economy.

We had a record level of combined full-time and part-time jobs for the month of September this past September. There were 6.2 million more Full-time jobs this September than there were at the peak of the pre-recession jobs market during July 2007. There were also 3.2 million more part-time jobs this month than July 2007. It took from July 2007 to July 2015 to recapture all the lost full-time jobs lost during the "Great Recession." Some of those full-time jobs were lost and recovered again during 2016. Former President Obama left office during January of 2017 with fewer full-time jobs than we had during July 2017. We saw an increasing number of Multiple job workers starting during 2013 as the Affordable Care Act was implemented. Seasonal workers did not count toward the full-time equivalent (FTE) hours calculation for requiring employers to provide health insurance. We tend to see the low for the year during August and the peak during October, November, or December. This means that we are in an "in between" month. Remember that the MJH data comes from the CPS data and is a subset of the CPS data.

The total number of Multiple Job Workers Jumped from the September 2017 level. The trend since 2010 was for an increasing number of MJH workers, in general. There was a spike in MJH during September of 2015 and a significant drop during September 2017. This may because there has been an increase of 6.5 million full-time jobs and a decrease of 2.5 million part-time jobs since the January Jobs report and the inauguration of President Trump. We have 4.2 million workers working a primary FT job and PT secondary job. This is higher than last September and lower than September of 2015 and lower than September of 2008. It is also lower than the September totals for 1994 through 1998. Data collection started during 1994.

The Secondary Full-time Job, Primary Part-time Job Data underwent some substantial revisions this month. The "Total MJH" data should be the combination of the four categories published: FT FT, FT PT, and PT PT, and Hours vary. It has not. Even with the revisions it does not equal to the total MJH value. This column started using the PT FT measure to get the data to balance. You can imagine that some workers worked a lower paying full-time job just to get health care benefits and worked a Part-time job that paid more because it didn't have benefits. It was actually the "Variable Hours" category that underwent revisions.

We should break the recent Total Multiple Job Worker record of 8.107 million this fall. We may even approach the  8.307 million MJH set during November of 1998 and November en the all-time record of 8.494 Million set during November of 1997. We did not lose as many MJH workers this past August as history indicated that we might lose. The  yearly peak  is normally set during October, November, or December. A new record is often set during February or March of the following year only to be eclipsed later during the same year. Will we break through 7.833 million level of July 2018 during October 2018? Most likely.

Wages are rising. There was an under-reported spike this month. It is possible that the reason the spike was under-reported was that some people are using the quarterly seasonally adjusted CPS median wage data instead of the non-seasonally adjusted CES wage data. It is more likely that they were using the seasonally adjusted wage and worker data, and that the seasonal factors used to create each data point for the private sector wage data was created using seasonally adjusted data. and the seasonal factors reduced the impacts of reality. The impacts of improving wages are being seen in the Monthly and Annual Retail Trade survey (MARTS) data. Retail sales are up over 5% from last year at the same point in time and heading toward $6 trillion for the first time. More retail sales should mean more retail workers, whether in stores or in warehouses for on-line fulfillment. More workers, higher wages, more disposable income. More money spent, more workers are needed, and the virtuous cycle continues through the end of the year. There will be non-seasonally adjusted worker and jobs trimmed through, and after, Christmas. January we will set the low level for the year. Last January we did not have as big a drop as anticipated. Full-time jobs are climbing higher and higher. Watch the same month levels of full-time and part-time jobs for any signs of weakness.  Watch the retail sales surge, especially on-line, until that time, as workers reward themselves for a busy year. 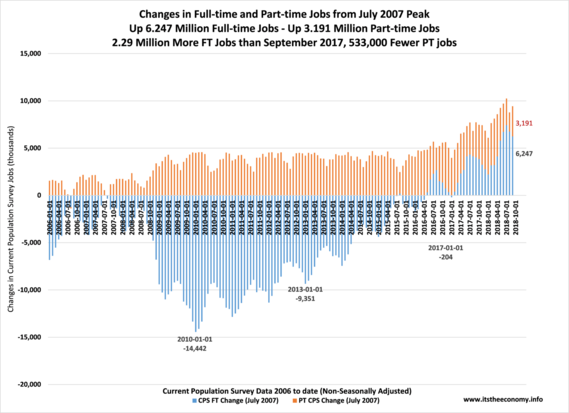 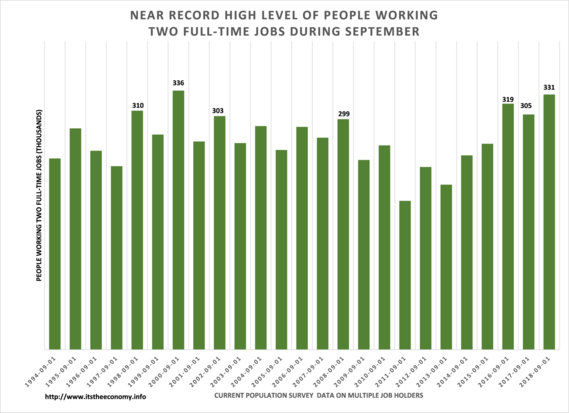