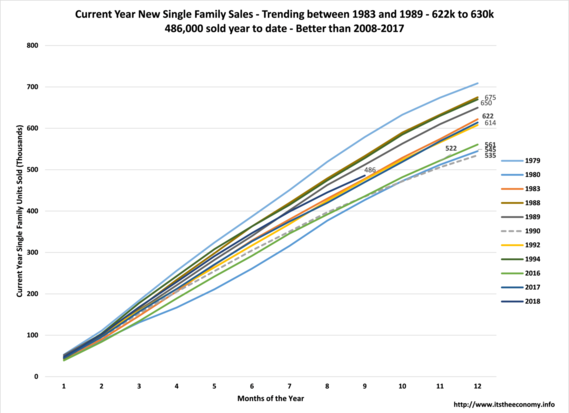 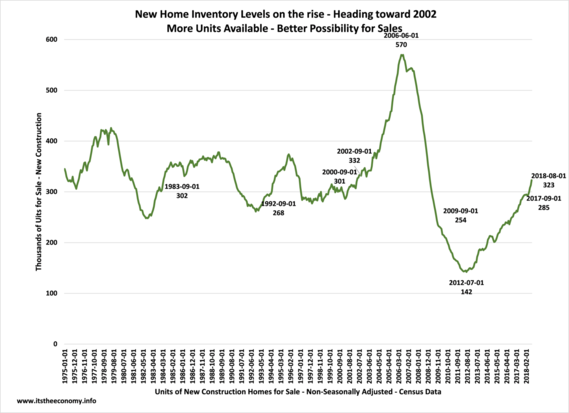 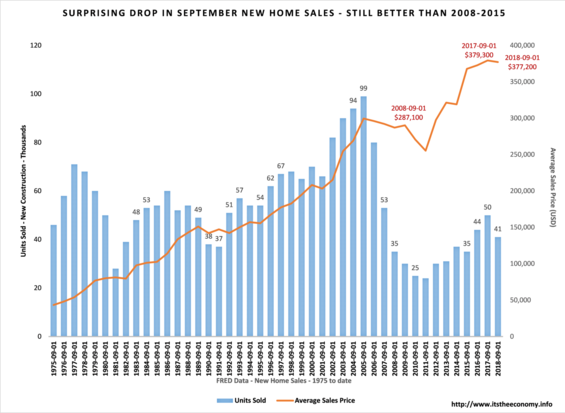 There are a number of reports that still garner some headlines: the Monthly Employment Situation Report, the New Home Construction Report, the Existing Home Sales Report, the New Home Sales Report, and the Gross Domestic Product Report.  Last week we received a solid, improving , New Construction report, with Starts, Units under Construction, and Completions at their highest levels since 2008. "September Surge in New Construction" goes into detail on the numbers and the trends. The existing home sales data disappointed on the number of units sold during September, while seeing a record level for the Average Sales Price for September, and while seeing inventory come in higher than last September. It has been discussed since December 2015 that a lack of inventory may be holding back existing sales.  This column produced the article "September Real Estate Forecast: More Good News" that addressed expectations for these two reports and today's new home sales data. It was projected that we should see inventory jump to at least 328,000 to 333,000 units. It was projected that units sold should beat the 2007 level of 53,000 units and fall between 55,000 and 59,000 units sold. It was also projected that we would exceed last September's average sales price (ASP) $379,300 and that the ASP would come in between $394,900 and $399,900. It was also possible that the ASP could hit $405,000. Improving real estate data should boost retail sales, and improving retail sales should boost jobs. What was recorded and what was reported for New Home Sales for the month of September?

New Home Sales Recorded Only 41,000 Units Sold. This is well below what was anticipated. The important thing to note here is that this is still better than what we saw sold during the month of September from 2008 through 2015. It is also better than what we saw sold during 1990 and 1991. This is going to be important when we look at the rest of the data.

The September Average Sales Price was the second highest ever.  We did not set a record this month. That is okay.  The average sales price has been just below $400,000 this year. The trend is higher, in general.

This data, even being weaker than expected,  is still good for the economy. New homes "need" new furniture, new garden equipment, new electronics, and new appliances. New sales often need new salespeople and new workers to make what is being sold. More inventory now may mean more end of the year sales or a strong Spring Market.