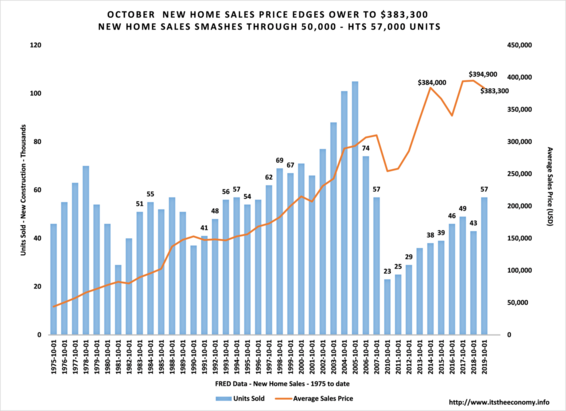 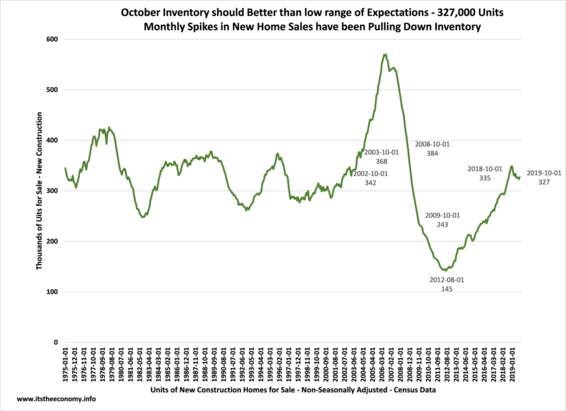 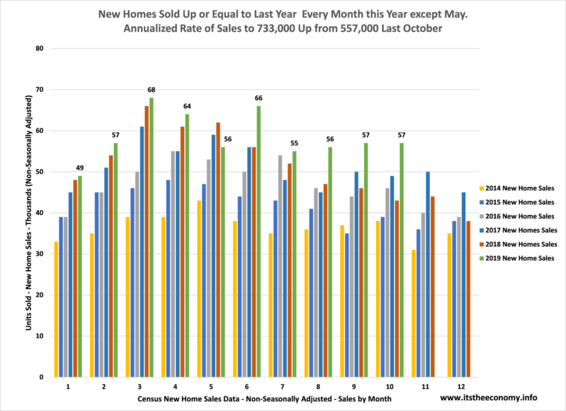 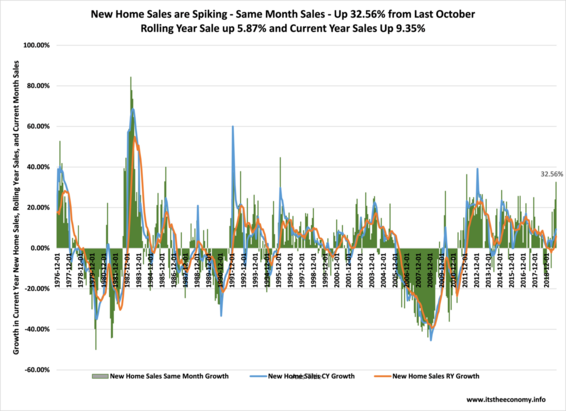 Last month we had seriously good new construction data, new home sales data, and existing home sales data. It wasn't bad news so it wasn't reported in most places. The same is true for what has already been reported for October:

The New Construction data garnered some attention. The Existing Hoe Sales data barely created a ripple in the daily news pond. What was expected and what was recorded for the new home sales data this October?

New Home Sales  were expected to grow October to October, and possibly month to month.   The number of October sales last year were lower than anticipated, making this year an easy year to see comparable sales spike. The October to October data was leaning between 46,000 and 53,000. The same month spikes mean that 53,000 to 58,000 was a distinct possibility.Regarding the Average Sales Price (ASP,) A value of $384,000 is just as likely as a value of $394,000 or $404,000. We might be "surprised" with another $395,000 month. The main question, as with existing home sales, is what kind of inventory would we record? Inventory has been growing year over year since the bottom of the Great Recession.  Inventory was expected t0 grow 1% to 3% this month and 3% to 17% from last October. It was expected that inventory would  be recorded around 330,000 units, or roughly 3%.

New Home Sales spiked 32.56% from Last October's 43,000 units to 57,000. This is remarkable. This could be reported as the best October since October 2007. There are some in the media reporting it as a drop because last month was revised up to 57,000. Unchanged is reported as a drop.

Same Month sales have exceeded last year's values 9 out of 10 months this year. The only month where we did not have as many sales as last year was during May. New home sales normally peak during March, April, or May. August was higher than July. September was higher than August. Normally new home sales cool during the Fall. We have the potential for having 50,000 or more units sold each of the next two months.

Inventory up Month to month, down October to October. Inventory was recorded at 327,000. Last month the inventory was 323,000 units and last October it was 335,000 units. The spikes in monthly sales have drawn down inventory. The level of completions have been strong this year so the level of sales should continue to remain strong through the end of the year.

Builder Confidence is High. The builder sentiment report was released last week. Sentiment is confidence. Last month the Sentiment was recorded at 71%. This month it was 70%. Some in the media (CNBC, Bloomberg, Marketwatch) will proclaim that confidence is waning. last November the sentiment was 60%. A 10% spike is impressive. It is also the highest November sentiment level since November 2004 when it was also recorded at 70%.

Battling the Mainstream Media Narratives. The media is confused as to how to spin the news. Same month sales have been this year. The spikes in the same month sales are pulling up the current year growth rate. Right now we are 9.35% ahead of where we were during October of 2018. Hear is a sampling of the news:

I could not find a story on CNN's website. If good data is not reported did it even happen?