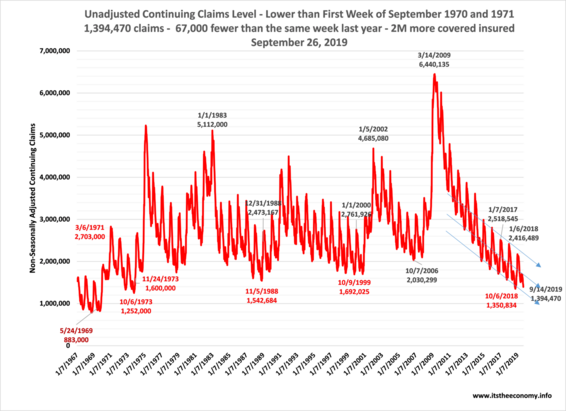 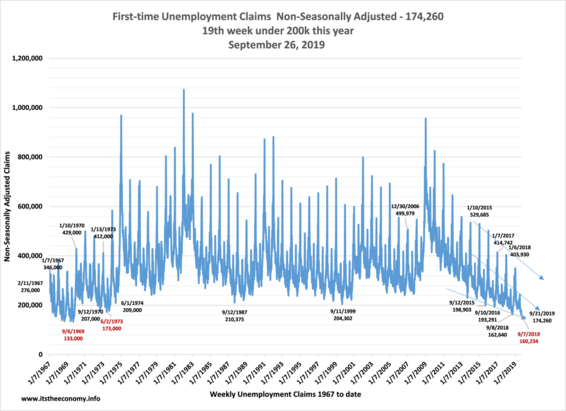 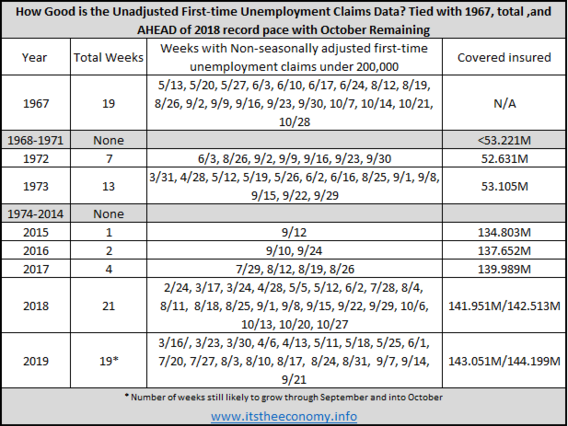 It used to be good when we had a seasonally adjusted (SA) FTU under 300,000 claims. Now they are talking about the number of week under 250,000 seasonally adjusted (SA) First-time Unemployment (FTU) claims. Another component to recognize is the Continuing Claims (CC) level. It was thought that 2 million SA CC was considered good. We have been under 1.5 million Non-seasonally adjusted (NSA) CC and have been pointing to a level under 1.35 million claims by the first week of October. The "most ignored" data point is the Insured Unemployment Rate, which was 1.01% NSA last week.  What happened this week?

We had our nineteenth week this year with non-seasonally adjusted first-time unemployment claims recorded under 200,000 claims. There ere only 174,260 NSA FTU claims recorded this week.  There are some who are saying that either the NSA FTU is higher than last year's data, by 636 claims (six hundred and thirty six) or 1280 (one thousand two hundred and eighty) claims higher seasonally adjusted.  We have 2.1 million more covered insured this Week than we had during the third week of September 2018. The 636 claims represents a normal revision of the data. The data shows that this was one of the lowest levels for the third week of September from 1970 through 2017, and would be the lowest if covered insured adjusted.

The headline seasonally adjusted (SA) FTU number was reported at 213,000. The headlines used to tick off the number of weeks when the SA FTU was reported under 300,000.  It was the same SA FTU level this week as it was reported last year for the third week of September.

The NSA Continuing Claims (CC) level dropped to 1,394,470 claims. This level is 67,000 claims lower than the second week of September 2018 level was recorded. It is 45,000 claims higher than the lowest level of NSA CC recorded during 2018. The low for the year is normally during the first week of October. It is possible, not probable, that we could challenge the October 6, 1973 level of 1.252 million claims.

How low can these values fall? It was during 2015 that there was a minor uptick in the NSA FTU level before the traditional low week of the year. There will be variations from year to year based on how the calendar fall and what the hurricane season is like that year. We just have to watch the peaks and the troughs. Eventually the NSA FTU level and the NSA CC level may be higher than it was the prior year simply due to record levels of workers being covered by unemployment insurance benefits. We have had eighteen weeks with the NSA level under 200,000 only during 1967 and 2018, and now 2019.The IUR will give us some insight if that increases then there may be a change afoot.