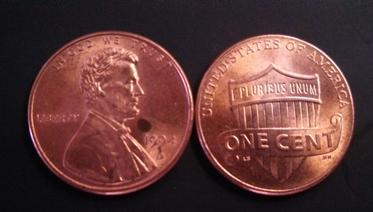 (Oct. 31) This week was looking like it was going to be all "treat" and no "tricks."  The first column of the week was written on the last day of October. There is a considerable amount of effort expended to examine annual trends and monthly trends as they pertain to employment, unemployment, and participation. "October Job Report Forecast:Hiring" projected an increase in full-time jobs, a drop in part-time jobs, a drop in unemployment, and possible increase or decrease in participation depending upon how low the unemployment claims dropped (all non-seasonally adjusted.)

(Nov. 1) The beginning of one month means the review of the prior month. "The Top Ten Articles of October" included five articles on the September Jobs Report,  three week in review columns, one article on the Retails Sales report for September, and the most read article was written regarding "Astonishingly Good Unemployment Claims data."

(Nov. 1) Last month's ADP jobs report was a bit of a head-scratcher as it reported job gains and the official employment situation report reported "jobs" as being lost. Remember that the official "jobs number" is a seasonally adjusted worker number -there is a difference between the two. This month the ADP report headline number was 236,000 jobs being added to the economy after revising the September number downward - it was still positive. "Outstanding October ADP Report" details how the number of jobs are up year over year for nine out of ten categories. It also details how both goods producing jobs and service jobs surged last month.

(Nov. 3) Last month's negative "jobs number" received some attention. This month's upward revisions to the "jobs" data from August and September, the positive preliminary September "jobs" number and the second best September to October Current Employment Statistics "jobs" growth rate since 1980 - sorry that was a disappointment. "Experts" were expecting over 300,000 SA CES workers to be added - the upward revision of 65,000 workers to the September private sector data and the addition of 247,000 SA CES workers during October means that we added 312,000 SA CES workers from last month's advance worker level. "October Workers Soar" started to dig into the details of the data and found that while the official unemployment rate (U3) dropped below 4% non-seasonally adjusted, the "real unemployment rate," the U7 rate, stands at 9.17% when the change in participation from October 2006 to October 2017 is factored into the calculation. There are missing participants who are neither employed nor unemployed according the the Current Population Survey.

The economy is rolling. The stock market is up. The jobs level is the highest it has ever been for the month of October. Unemployment is down. Consumer Confidence is up.  Let's talk about Kevin Spacey, Harvey Weinstein. Donna Brazile, and anything else that can distract the mainstream media. This is the "Up Economy." Squirrel! 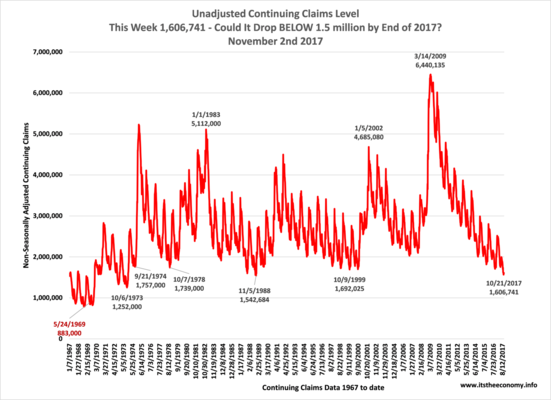 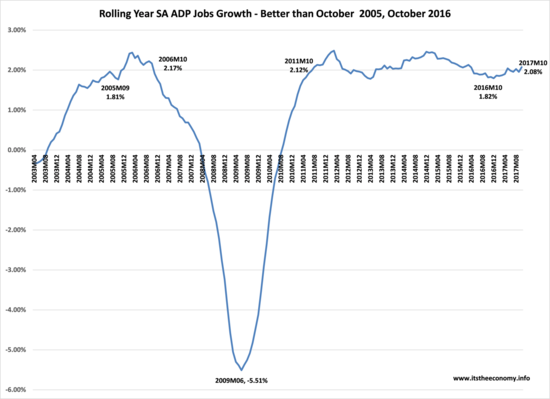 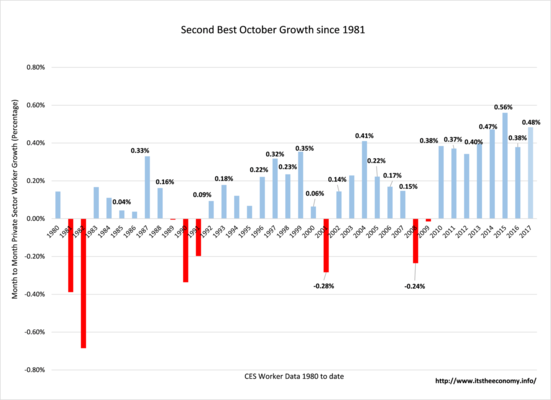