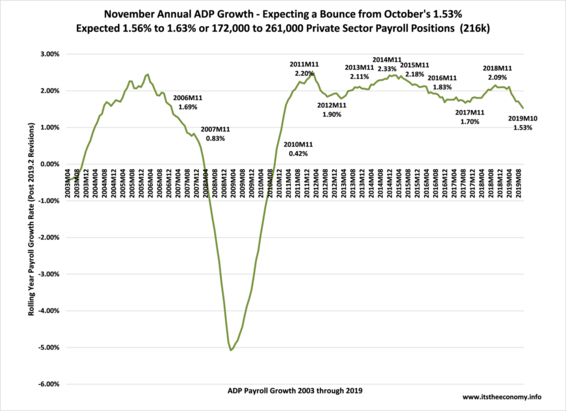 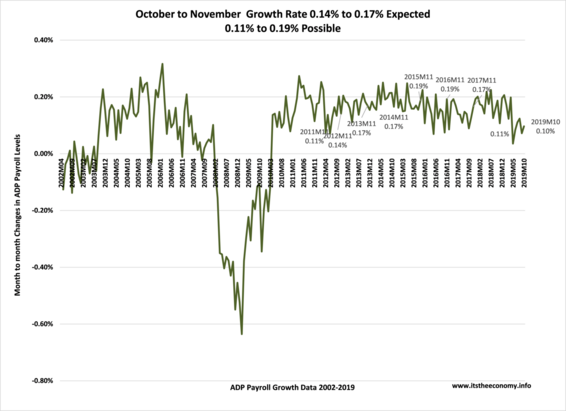 The ADP jobs numbers are pointing to  strong month to month Gains.

Will it be enough to turn the corner on Annual Growth?

The ADP Private Sector Payroll Report is released the Wednesday prior to the Monthly Employment Situation Report, or Jobs Report. The ADP report differs from the Non-farm Payroll report in two major ways: The ADP report does not release non-seasonally adjusted data and the ADP report does not include the Government Sector Jobs. There are three main ways to examine the data: Month to Month Growth, November to November Growth, and Current Year Growth.

We are expected to see month to month growth in all sectors except IT and possibly Natural Resources (Mining and Logging.) The largest growth sectors are expected to be Education and Health Services (EHS,) Leisure and Hospitality (LAH,) Professional Business Services (PBS,) Manufacturing, and Trade, Transportation, and Utilities (TTU.)  This is important because we have seen the most Job Openings, Hires, Separations, and Quits in LAH, EHS, TTU, and PBS. This month we receive the November Jobs Report and the October JOLTS (Job Openings and Labor Turnover Survey.) There are a considerable number of jobs turning over each month. making it hard for the employers to fully add workers. They are taking 3 steps forward and 2.5 steps back. The month to month data indicates that we should grow 0.14% to 0.17% or roughly 181,000 to 220,000 jobs. We could grow as little as 0.11% (142,000) or as much as 0.19% (246,000.) The sweetspot is roughly 192,000 to 201,000 jobs.

We are expected to see November to November growth in all sectors. The sectors expected to have the largest growth rates are Construction, Natural Resources, PBS, LAH, and EHS. This year the construction growth rate is expected to be larger than the M/L rate. number of M/L payroll positions could stagnate an remain unchanged. The growth rate has been declining, as a whole, since the beginning of the year. part of the stall could have been the Government Shutdown, or Schumer Shutdown.  We may have seen a drop due to a lack of early new home starts and completions. Things are picking up for both. New home sales are the best they have been since 2007. We may see a spike in construction workers this November. Growth was just 1.53% last month. It is anticipated that growth should fall between 1.56% and 1.63% or 172,000 to 261,000 payroll positions. The midpoint here is roughly 216,000 positions.

Current Year Growth is only 145,000 positions a month. We have added 1,445,000 private sector payroll positions according to the ADP survey. Something has to give. Normally when the month to month data points lower than the rolling year data then we see the low end of the expectations. The ADP data has seen significant revisions the past two February reporting periods and this entire year. We may see some upward revisions to the October data, and most likely an upward revision to the September data. If there are upward revisions of 20,000 positions then 20,000 positions would be borrowed from November. A 216,000 value would become 196,000.