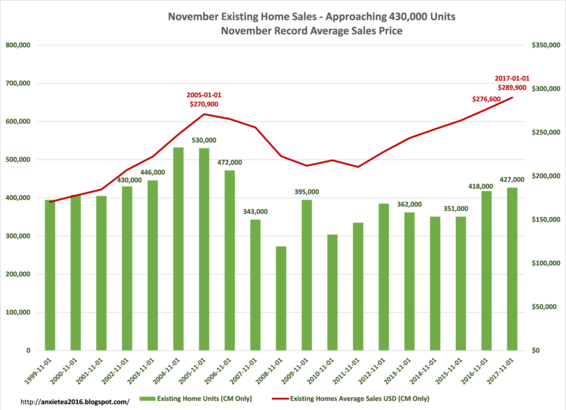 There are a series of reports that the media used to follow very closely: the Weekly Unemployment Claims Report (out tomorrow,) the Monthly Employment Situation report (out two Fridays ago,) the new residential construction report (out yesterday,) the New Construction Sales data (out this Friday,)and the monthly Existing Home Sales data which was released today. This week this column published a forecast column "November. Real Estate Forecast: Another Surge" in which strong new construction starts data was projected, as well as a surge in units under construction and completions. The article "Nov. New Construction: Expansion Continues" goes into the details of the data and explains where we are with respect to where we were last month. The forecast article projected a potential new record price for the average sales price and the most November Units sold since 2006.

We had solid sales with "non-existent" inventory. The lowest ever level of inventory for single family homes was December 1999 with 1.71 million units, until last December when we had 1.65 million units. This month there were 1.670 million units for sale. Could we drop below 1.5 million units during December? It used to be that people would hold off on selling homes until February or March when the snow was thawing. Low inventory is impeding sales. The law of supply and demand dictates that as supply falls, based on steady demand, prices will rise. The months on market data is down to 3.4 months.

The Devil is in the Data. The number of units sold during October were upwardly revised leading to a "drop" in sales from month to month. The total volume of units sold is up from last November. The Realtors are projecting 5.8 million units as a seasonally adjusted annual rate of sale. They are projecting out to November of 2018. Last year it was 5.61 million units. Inventory is holding back our total sales.

The data for new home construction was solid yesterday. The new home sales data will be released this Friday. The new home sales inventory is also especially low - even with an elevated level of units under construction. The non-seasonally adjusted months on market may drop below 5.0 months when the data is released. There is still a considerable amount of growth needed t break through the 2007 level of sales. We may break through the 2002 level this year. It may be three or more years to reach the peak unit sales that were recorded during 2005. The "only thing" holding us back is the inventory level. We have record levels of full-time jobs on a monthly basis with the current month having more full-time jobs than the same month a year prior. Full-time jobs are necessary for a mortgage.  Will more people place their homes on the market next year? Time will tell. 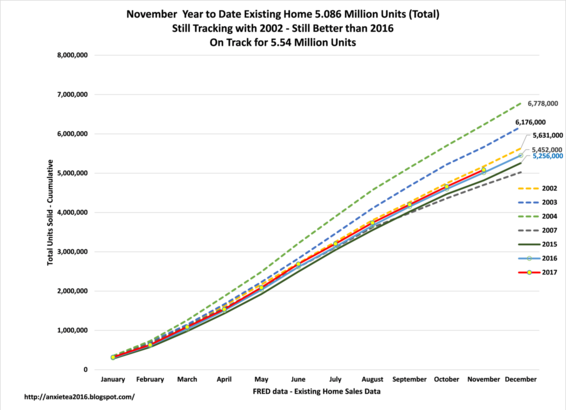 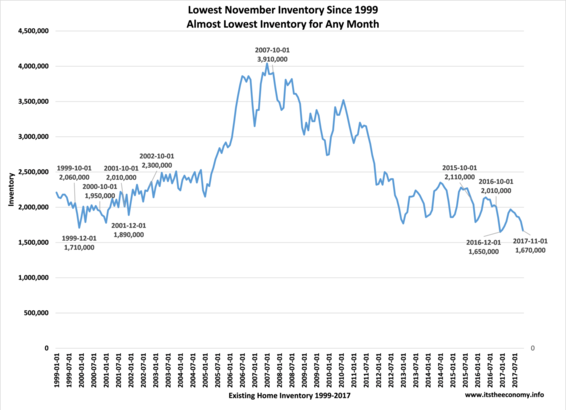