Will The Jobs Report Allow Recorded Good News to be Reported?

The ADP Data is released the Wednesday before the Jobs Report is released. Two days advance warning. We are expected to see seasonally adjusted ADP month to month growth in all sectors except IT and possibly Natural Resources (Mining and Logging.) The largest growth sectors are expected to be Education and Health Services (EHS,) Leisure and Hospitality (LAH,) Professional Business Services (PBS,) Manufacturing, and Trade, Transportation, and Utilities (TTU.)   192,000 to 201,000 jobs.  We are expected to see November to November growth in all sectors. The sectors expected to have the largest growth rates are Construction, Natural Resources, PBS, LAH, and EHS. It is anticipated that growth should fall between 1.56% and 1.63% or 172,000 to 261,000 payroll positions. The midpoint here is roughly 216,000 positions. This was covered in "Nov. ADP Forecast: Strong Month to Month Growth."

We should record the addition of another 400,000 private sector workers this month. The non-seasonally adjusted CES data is pointing to a loss of workers in the Leisure and Hospitality (LAH) sector, the Other Services (OS) sector and the Construction Sector. This year we may see no change or growth in the Construction sector as builders move units under construction into completions and sales. This has been the best new construction sales year since 2007 through the month of October.  This has been the year of the completion. The largest growth rates for November workers is expected to be recorded with the Trade, Transportation, and Utilities (TTU,) Government, Education and Health Services (EHS,) Information Technology (IT,) and Professional And Business Services (PBS) sectors. It is expected that we will  grow between 0.28% and 0.35% this month.

The November to November growth is expected to be recorded in Mining and Logging (M/L,) Construction, PBS, EHS, and LAH. Manufacturing is also expected to pop here, as well.  It is anticipated that the annual rate of growth will be in excess of 1.50%, and most likely 1.52% to 1.54%.

We should report the addition of 189,000 to 228,000 private sector workers this month. The SA CES data is pointing to month to month gains in all sectors except possibly the Government Sector, which has no impact on the Private Sector Data. The largest growth is expected in TTU, LAH, PBS, Manufacturing, and EHS. We should see a  "surprise" spike in Manufacturing as General Motors workers return to the workforce.

The Story that is untold elsewhere, Participation is rising year over year as unemployment is falling.  This is a tough trick to perform because unemployed workers are participants. If unemployment falls this "adds negative participants" that have to be offset by a greater number of full-time or part-time jobs, or a combination of the two.

Seasonally Adjusted Jobs should report a rise - both Full-time and Part-time. We have roughly added 200,000 combined jobs during November of 2016, 2017, and 2018. There was a huge spike during November 2014. If unemployment falls by more than 200,000 seasonally adjusted and combined SA FT and PT jobs do not rise by more than 200,000 then the seasonally adjusted participation rate could fall - even with strong NSA CPS growth.

Last Year the November Participation rate and the Unemployment rate both fell. The current NSA U-3 is just 3.35%. This is lower than the best unemployment rates that former Presidents Regan, Clinton, George W Bush and Obama ever had. Sooner or later the unemployment rate will rise as people say that they are unemployed - even if they are not collecting unemployment benefits.

Expect the number of women in the workforce to rise through the end of the year. Men, on the other hand, are expected to see jobs decline through January. Last year women set records for total CPS jobs during October, November, and December. October is already an all-time high. The spike in PT PT jobs favors women. A spike in FT FT jobs favor men.

This report is more than just one number. This report is created using two data sets that have been in conflict with each other all year. Expect good news because of GM workers returning to work. Expect good news because of Christmas hiring in TTU, IT, EHS, and PBS. We are close to a 52 year low for November, NSA U-3 Unemployment (3.3% during 1968 and 1969.) We had 5.5 million unemployed last month. The first low to beat is the 5.36M level of November 1999. The next record would be well under 5 million at 4.846 million during November 1971. 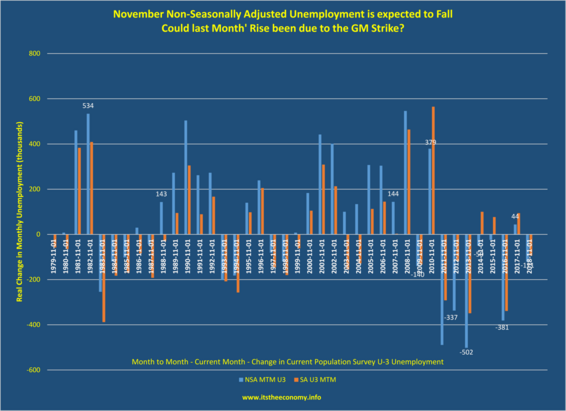 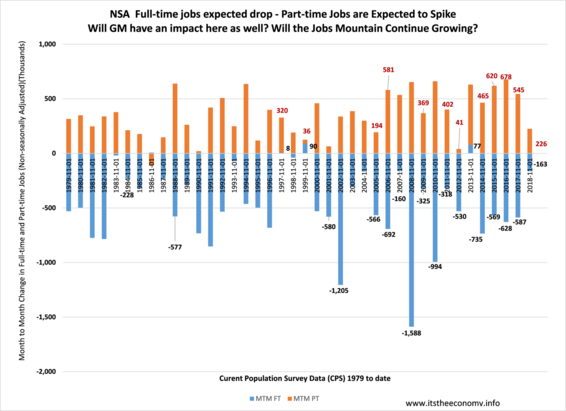 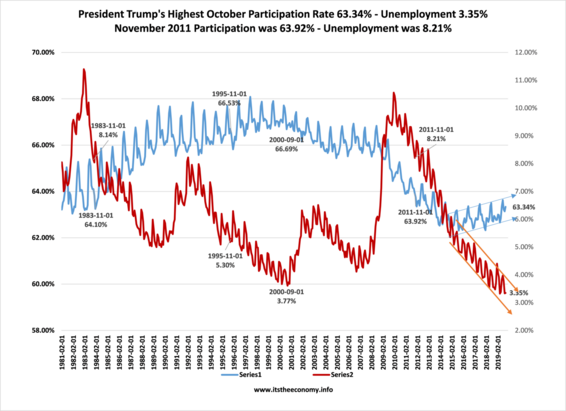 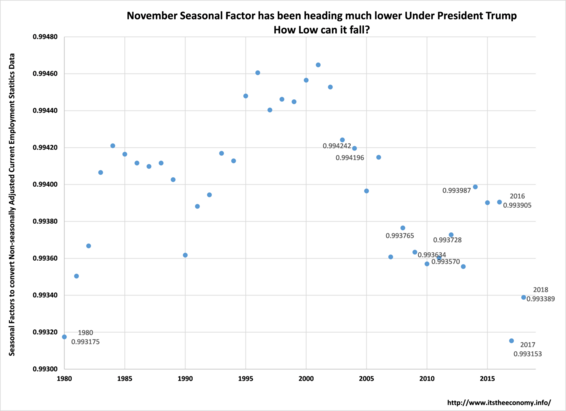 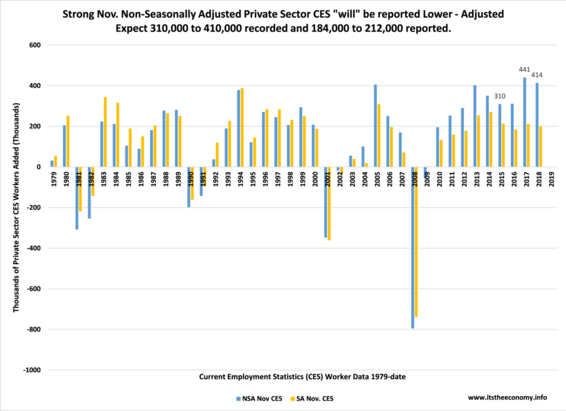 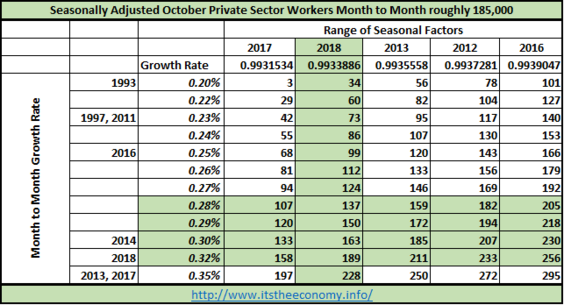