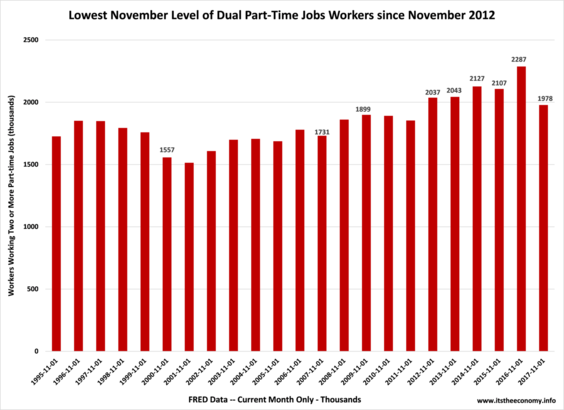 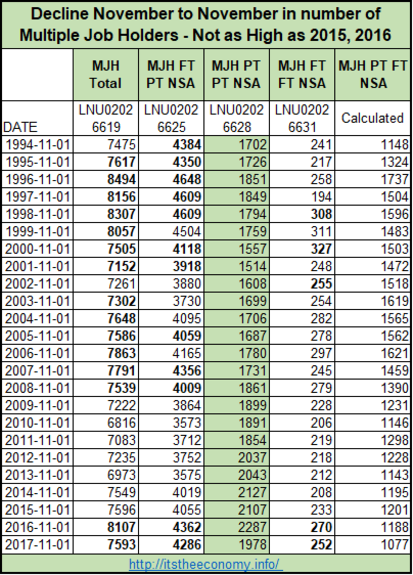 The monthly jobs report was released three weeks ago. This column has written numerous articles on the jobs report:

When  the first analysis was published there was comment made regarding the multiple job holder data. It was anticipated that the total number of multiple job holders would rise as people hired seasonal help for the Christmas buying season. There was a question as to whether or not the November record level of people working two part-time jobs that was set last November would be exceeded this November.  The Month to month data and the year to year data paint different pictures.

November is Normally Peak Multiple Job Month. We normally see the trough of multiple job workers hit during August as college students return to school. The peak month for multiple job workers is normally either October or November. last year there was a secondary spike during March that may have been related to the 2016 elections. All components of the multiple job market were down from November 2016.  The number of people working two FT jobs, 2 PT jobs and either a FT job and a PT job or a PT job and a FT job dropped.

The trend of multiple job workers was up during the 1990s before it started to to decline into the early 2000s. It picked up through 2007 when the jobs market peaked for number of FT and PT jobs.  The number of multiple job holder bottomed during 2010 as the jobs market hit rock bottom. The "part-time recovery" occurred as part-time jobs were added and full-time jobs were recovered through all of President Obama's time in office. It was not well reported elsewhere that President Obama left office with fewer full-time jobs than were present during the Summer of 2007 as he was running for office. The elevated levels of multiple job holders brought down the participation rate as fewer people were working more jobs. The participation rate was also reduced under President Obama as more workers were competing for fewer jobs, at the outset of his Presidency, and there were fewer jobs added than workers.

Next week we will start receiving the December data. The December Employment Situation Report should be strong, especially for the Trade, Transportation, and Utility sector as well as the Leisure and Hospitality Sector and the Food and Beverage Sectors, Stores and Establishments. Retail should surge. New Home Construction should surge for completions, in hopes of end of the year sales, and starts, as builders look forward to a strong Summer. This could then spur future sales in the electronic and appliance retail sector. Will we see a spike in the multiple job holders? Could it have been delayed a month?

Tomorrow is the Week in Review article.  Monday is new Year's Day and will see the publication of the Top Ten of December Article and the Top Ten of 2017 Article. Time permitting, Monday will also see the release of the Monthly Jobs Forecast Article.

It is the fifth day of Christmas. Merry Christmas and Happy New Year. 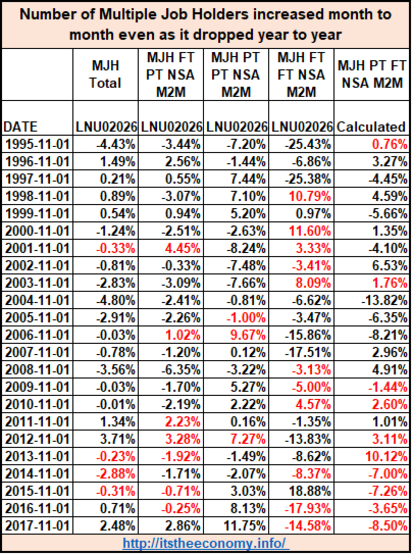 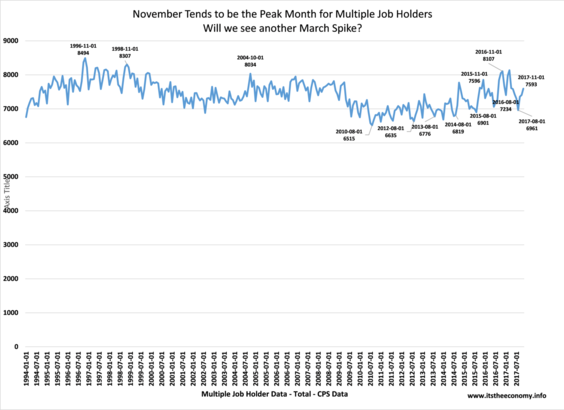