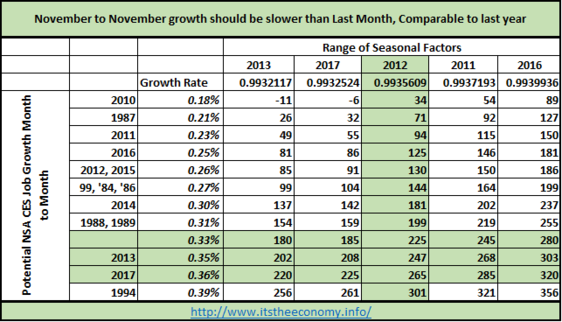 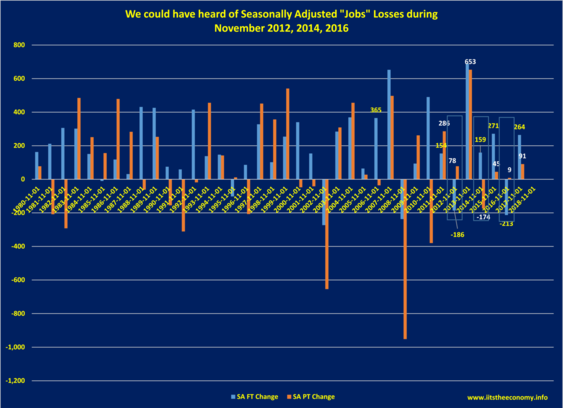 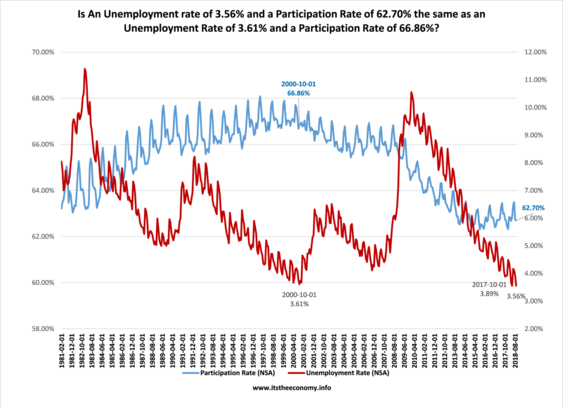 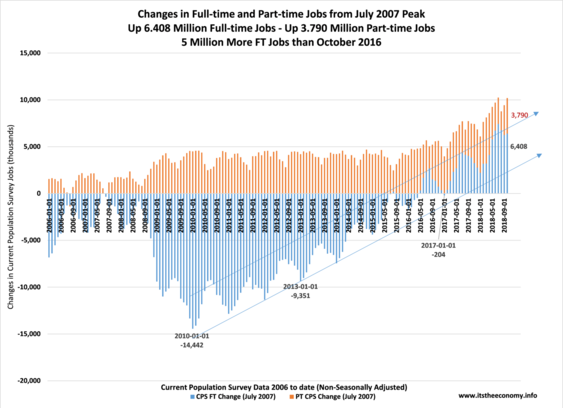 The monthly employment situation report, or jobs report, for November with be released December 7th. The "jobs report" is created using two data sets. The Current Employment Statistics (CES) data measures workers and is used for the headline "non-farm payroll" number. The NFP includes private sector workers and government workers. The "jobs streak" data that former President Obama touted on a monthly basis is the seasonally adjusted (SA) private sector data. The second data set is the Current Population Survey (CPS) data. The CPS data measures full-time and part-time jobs, the number or unemployed workers, and an estimate of the workforce population. This is the data that is used to create the unemployment rate data and the workforce participation rate data. There are seasonal factors used to create the SA data, the reported values, from the non-seasonally adjusted (NSA) values that are recorded. The seasonal factors change by data set, category of data, month, season, and year. Seasonal factors can turn positive data negative and negative data positive. There are many ways to examine the data. The main ways to examine the data is the changes expected month to month, the rolling year year data, and the current year data

November is a hiring month for workers. The CES data underwent a massive revision with the release of the January Jobs report. This revision took 452,000 potential workers from the January data and spread it across the data from 2016 and 2017. The rolling year data was trending higher from the beginning of 2017. The trend line was changed to a declining trend through 2017.  If we continue to grow as we have during the past few months, between 1.93% and 1.97%, we could have a very strong month. People are hiring workers for the Christmas season.

The Sector Data Indicates non-seasonally adjusted growth in all sectors except Leisure and Hospitality and the Other Services Sectors. The NSA CES data indicates month to month gains in Mining/Logging, Manufacturing, Trade, Transportation, Utilities (TTU,) Information Technology (IT,) Professional Business Services (PBS) Education and Health Services (EHS,) and Government. Construction could go either way as completions pick up pace toward the end of the year or because of the fires out west. November to November all sectors except IT should add workers. The seasonally adjusted data indicates that all sectors should add workers month to month and November to November except IT.

November is normally a month of part-time job hiring and full-time job trimming. The NSA CPS data indicates that we could see a net loss of NSA CPS jobs. We have seen net losses recorded, not reported, during 2012, 2014, and 2017. The "Jobs Streak" is based on the SA CES data and not the NSA CPS data.

Up is Down, Down is Up. The seasonal factors normally turn part-time job gains into recorded losses and recorded losses in FT jobs to be reported as gains. What is interesting here is that we saw net SA CPS jobs losses during 2012, 2014, and 2016. Are these losses "election related?"  Does this mean that we may see net SA CPS worker losses this month? The data collection data was November 12th, after the elections.

The CPS data includes data regarding multiple job holders which should rise this month.  Multiple job workers are those who work two full-time jobs (FT FT,) two part-time jobs (PT PT,) or a primary FT job and a secondary PT job (FT PT,) or a "primary" part-time job and a secondary FT job (PT FT) Men tend to work more FT FT jobs while women tend to work more PT PT jobs. It is anticipated that we will exceed 8.2 M total multiple job holders this month.  It is anticipated that we will see a drop in FT FT workers, a rise in FT PT workers and a rise in PT PT workers. Those who were PT FT may shift to being FT PT.

Participation should record and report improvement this month as compared to last November. The participation rate has been gradually improving as unemployment has been falling. Remember that unemployed workers are still participating in the economy. Last month the "Five Presidents at 21 months" article detailed how President Trump and former President Clinton were the only Presidents to trim unemployment and add full-time jobs during the first 21 months in office. President Trump trimmed part-time jobs and added the most full-time jobs. Former President Clinton added more total job, adding fewer full-time jobs and adding 2.7 million part-time jobs.

There are plenty of other items that will be covered in the report. We will receive worker weekly wage data. We have been setting monthly records for weekly wages in all sectors during a given month since this Summer. We should see November to November gains in average weekly wages. The combination of rising wages and rising workers should be stimulative to the Gross Domestic Product. The growth in "all sectors' for workers should mean that men and women have their best November for full-time and part-time jobs. How will the data impact various age groups?

The economy is growing. This report may catch some observers off-balance. The pundits are saying that the economy is slowing. What they mean is that we may be seeing a slowing in the growth. This is a false narrative. The recent GDP report showed upward revisions to Gross Private Domestic Investments. Companies normally do not invest if they are anticipating a slow-down. Normally we see a period of five or six quarters of declining same quarter GDP growth before it turns negative. If the GDP goes negative for two quarter in a row we are "in a recession." We have had nine consecutive months of improving growth rates. This is a "lagging" economic indicator.It tells us where we have been. The quarter to quarter GDP tends to peak during second quarter, drop a little during third quarter, and drop a little during fourth quarter, before dropping a bit during first quarter and spiking in the second quarter the following year. Basically it is four or more steps forward during second quarter and a step back during the next three quarters with net growth overall.

Contrary to what you are reading elsewhere, the housing industry in chugging along at a good pace.  New Home Construction is ahead of where we were during October of 2008 through October of 2017. New Home sales are ahead of where we were during October of 2016 and 2017, and therefore the same as new construction, this October was better than October 2008, 2009, 2010 through October 2017. Inventory is finally back to "normal," which means that we may see even more sales next year. Existing Home Sales have been held back by a lack of inventory. Inventory is better this October than last October. The sales have dropped a little due to the lack of inventory. We may be seeing those sales data improve as more people work permanent full-time jobs. We had a "jobs iceberg" between July 2007 and January 2017.

Contrary to what you are hearing, the Retail Ice Age is over. We are in a Retail Renaissance. We were overbuilt for retail stores. There were vacant storefronts. The thing that was being ignored is that we were still selling more total "stuff" once we pulled out of the Retail Recession. We are on track for a Record $6 trillion dollar retail sales year. More sales means we need more workers to create the material to be sold and to deliver the goods and to sell the goods.

Contrary to what you are hearing, the number of Job Openings to the number of unemployed workers does not matter. The Job Openings data comes from the JOLTS report. the JOLTS report closely mirrors the CES data set. It measures workers. The Unemployment data is from the CPS jobs data set. The CES data is the Establishment data. The CPS data is the household data. Different sample sizes. Measuring different things. They might as well compare the Job opening data with the data from the weekly claims report for continuing claims. Why do we have 1.4 million unemployed workers if there are 7.0 million job openings, as of September. Three sectors with the highest level of job openings, the highest level of quits, and the highest level of hires, are in the bottom four for average weekly wages.  People can get paid more in other sectors. Until wages in the lower wage groups rise to a "worthwhile wage," especially in Leisure and Hospitality, there will be a high "churn" rate.

Next week Wednesday we will receive the ADP Payroll report. This report closely resembles the Private Sector CES data. This column will publish an ADP forecast article next week. The confusion that is created in the media is that they compare the private sector ADP payroll data with the non-farm payroll CES data. Different data sets, different sample sizes, measuring different things with different seasonal factors.

The economy is strengthening as more people find work, especially as they find full-time jobs. More full-time jobs normally means better income. If it isn't that great then they may work two jobs. More money means more retail sales. More money means people may chose to own instead of rent. People will need new things to fill their new homes, whether they are existing homes or new home construction homes. We should see more retail sales, more jobs, more homes built, more jobs. Contrary to what you are hearing, there is not a recession in the immediate future. Remember that the economy was supposed to "tank" after the election of President Trump. One month does not make a trend. If people recognize the trend after 22 months then maybe they will give home some credit for the first 42 months. 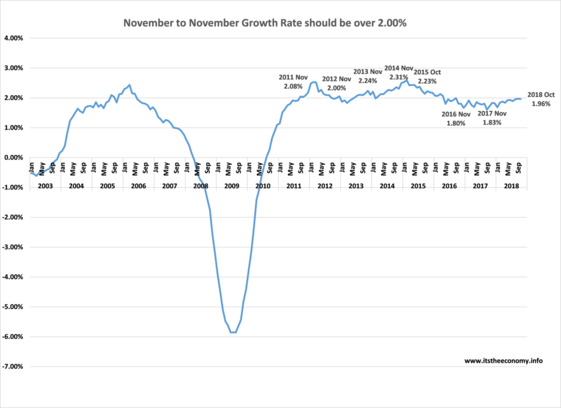 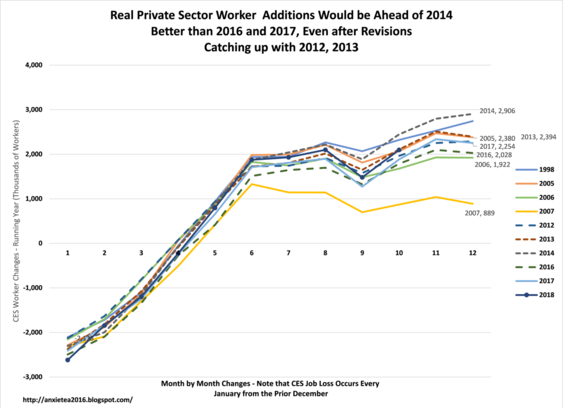 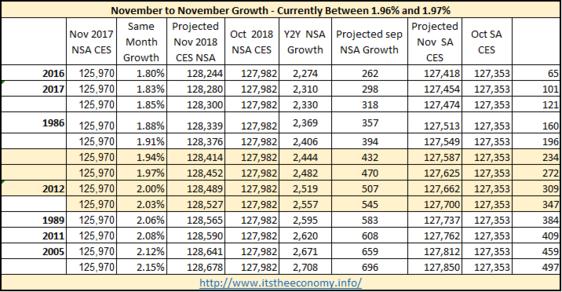 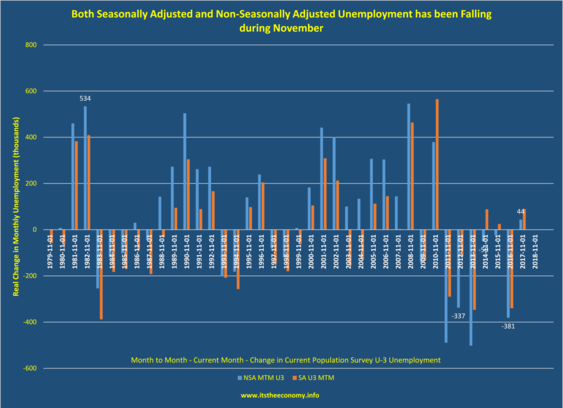 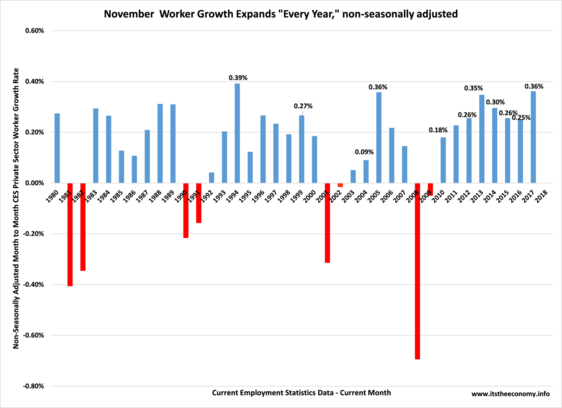 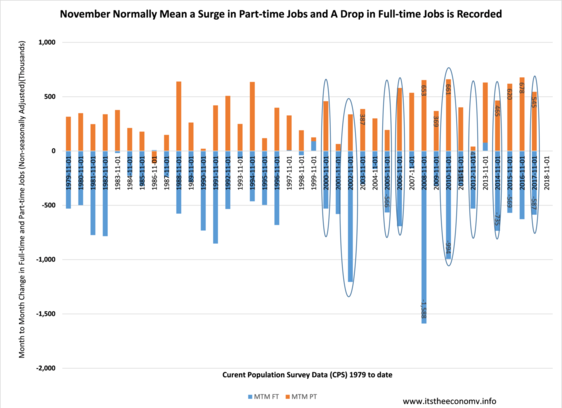 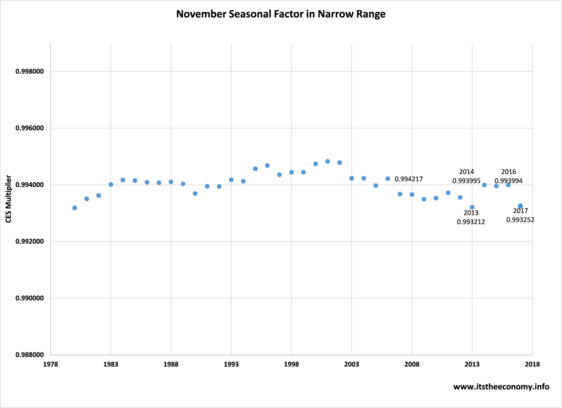