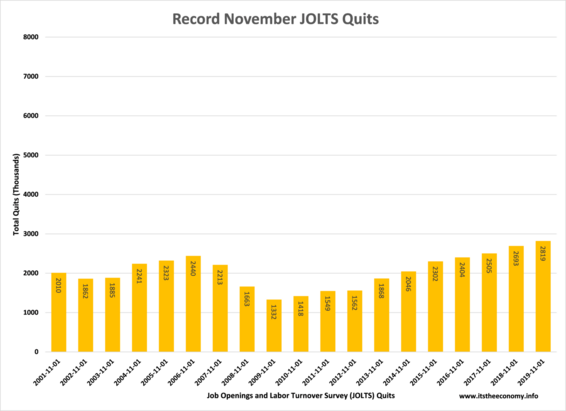 What Happened This Month with the Nov. JOLTS Report?

The Monthly Employment Situation Report is a market mover. The report is created using two different data sets: the Current Population Survey (CPS) jobs and unemployment data and the Current Employment Statistics (CES) worker and wages data. It doesn't break down the data at the State Level. Today's November State Employment and Unemployment Report  does break it down by state.

This is what has been previously discussed:

Another report on the November Jobs data was released last week, the Job Opening and Labor Turnover Survey data. Where were the Job openings, Hires, Quits, and Total Separations?

Record November Level  of Quits this December. There were some in the Legacy Media expressing concern regarding the dropping level of seasonally adjusted job openings. Seasonal factors change by category, month, and year. This is often ignored elsewhere.

The JOLTS data is always one month and one week behind the Employment Situation data. This month we received the December Jobs Report and the November JOLTS data. The job report data is a combination of two data sets, the Current Population Survey (CPS) jobs and unemployment data and the Current Employment Statistics (CES) worker and wages data. All of this data has seasonally adjusted data and non-seasonally adjusted data. They have different sample sizes and are measuring different things. This was remarkable JOLTS data. 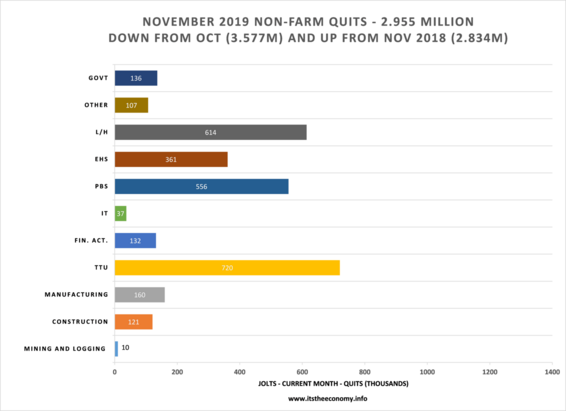