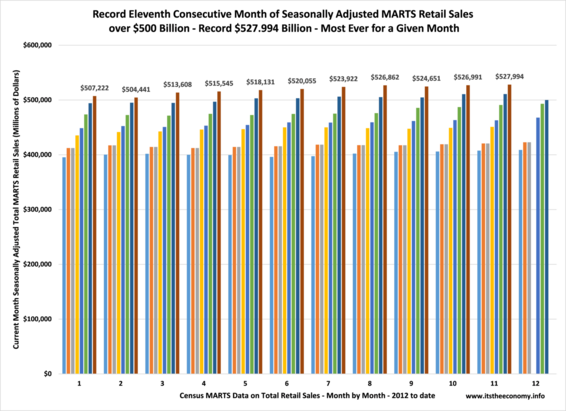 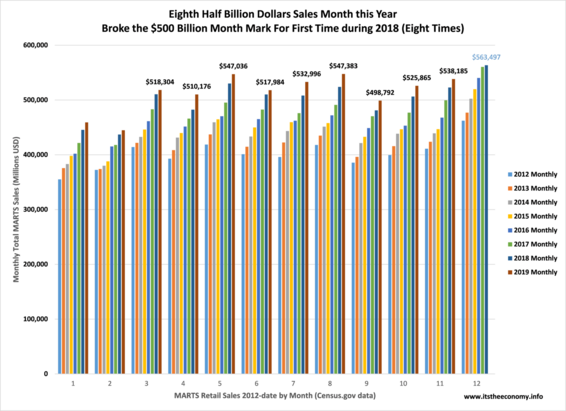 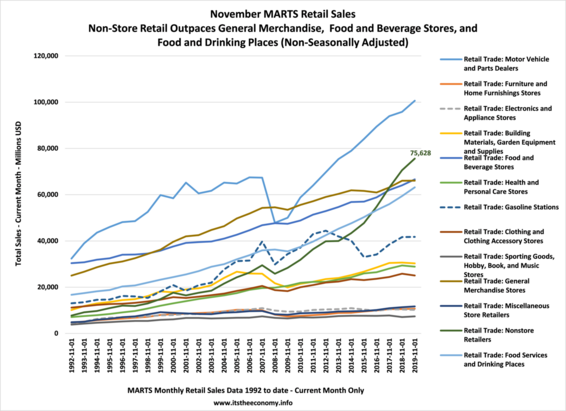 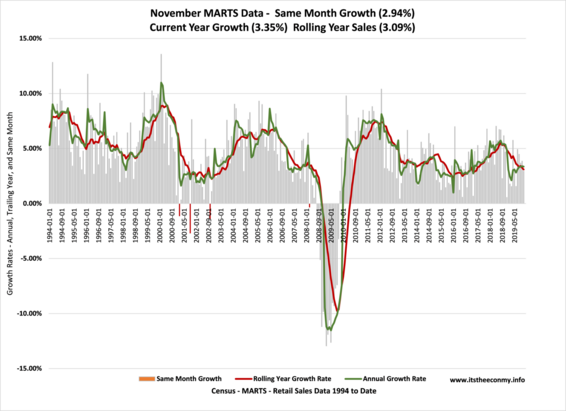 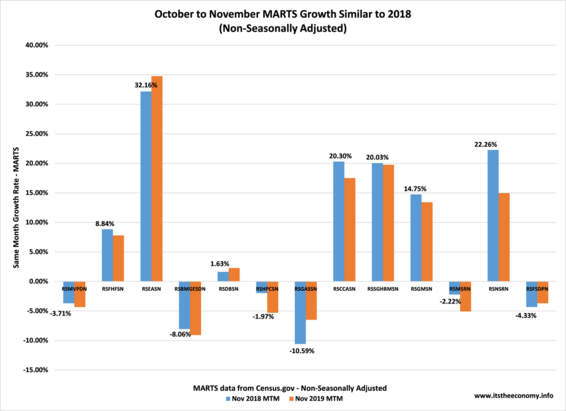 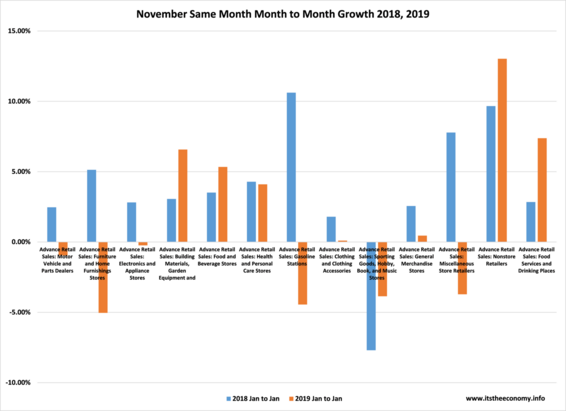 Last week we received the November Jobs report which recorded and reported record levels of workers, wages, and  jobs. This should bode well for November and December sales. Last year we had the "Schumer Shutdown" that shutdown the government, loan approvals, and retail sales. This year we have had the best new home sales data since 2007.

The November Retail Forecast was for record monster spikes in month to month sales in five sectors. A jump of 3.50% to 4.00%, or roughly total sales of $540B to $546 billion in sales, based on month to month data was expected. The forecast was also for  record November to November growth in all sectors except Sporting Goods Hobbies, Books and Music (SGHBM) and Electronics and Appliances (EAS.)  The overall Nov-Nov growth was expected to be 3.25%-4.25%-5.25% or $540-550 billion in sales.

Non-Seasonally Adjusted Sales Jumped 2.47% month to month and hit $538.185 billion. The sectors with the largest growth were EAS, SGHBM, CAC, NSR, and GM. November to November growth hit 2.94%. November to November growth was largest in NSR, FDP, MVP, SGHBM, and FBS. Non-store retail broke through the $75 billion mark this month. We actually recorded month to moth growth, not declines, in SGHBM and EAS. We saw declines in MVP, BMGE, HPS, GASS, and MISC sales. This is similar to the pattern that we saw last  recorded last year year. (see Same Month 2018, 2019 histogram chart.)

It was projected that we would report our eleventh consecutive month of seasonally adjusted sales over $500 billion, this month.  Seasonally adjusted month to month growth was expected in all sectors except Gasoline, Electronic and Appliance (EAS,) and Furniture and Furnishings (FHF.) Jumps in NSR, MISC, HPC, FBS and FDP sales were expected month to month in the range of  0.34% to 0.69%.  A range of $528 billion  to 530 billion in sales. Expect seasonally adjusted November to November growth in all but two Sectors: EAS and SGHBM. The largest growth was expected in  in NSR (10-15%,) FDP (5%,) Clothing and Clothing Accessories (CAC,) HPC and General Merchandise (GM.) A 3.99%, 4.99%, and possibly even 5.99% Nov-Nov growth was anticipated. Sales of $530 billion, $535 billion, or $540 billion was expected based on Nov-Nov growth.

Record Seasonally Adjusted Retails Sales of $527.994 billion. This is the most ever sold in any given month, seasonally adjusted. Seasonally Adjusted Retail Sales edged higher by 0.2% month to month and 3.35% November to November. The 0.2% was a "disappointment" to the talking heads. They could have said we just had our best retail sales month ever and we haven't received all of the Christmas sales data. Nope. They are concerned that we only had a 0.2% growth rate month to month.

The Seasonally adjusted data had some surprises.  We saw declines in EAS, as expected, and HPS, CAC, GM sales. We saw spikes in NSR, GASS, FBS, EAS, and MVP sales. November to November sales Spiked in NSR, FDP, MVP, SGHBM, and GASS. We saw November to November declines in CAC, EAS, HPC, and General Merchandise sales. How were the Seasonally adjusted data so out of sync with the Non-Seasonally Adjusted data? The SA MARTS data should look something like the Non-Seasonally Adjusted Data with lower highs and higher lows. There are some instances where the MTM growth was larger, NSA, and the data was reported as a contraction, comparing the same category adjusted. The seasonal factors used to convert the NSA data to the SA data change month to month, year to year, and category by category. We may see something similar, and in the other direction, next month.