Participation matters. If you are employed or unemployed you are participating. We could have 6 million unemployed workers and 154 million workers or 154 million unemployed workers and 6 million workers and we would have the same level of participants.The participation rate has dropped for those 16-29 years of age since 2007. July 2007 was the peak pre-recession job month with the most combined full-time and part-time jobs, according to the Current Population Survey data.  Participation has also declined for those 40-64 years of age.  Some of this is age shift.  Everything is relative. There are "negative" unemployed workers between the age of 30-39 and 65 years of age and older. There should be "more unemployed" workers or fewer workers working in these age groups if we were to be at the same demographic mix of workers, using  the participation rates we had during 2007. There has been a shift in the percentage of workers and the percentage of population. The shift started with the 40-44 year olds, moved to the 45-49 year olds, then the 50-54 year olds.

We have an aging workforce. Depending on how you look at it the older workers are either boosting or lowering the participation rate. Some of the drop in workers may be a hangover from the Great Recession. Some of the drop in the workers 35-44 years of age may be because they are rearing children and are stay at home parents. Some of the shift is that people are aging out of their age group every 5 years. The drop in the participation rate is a combination of a drop in workers and a drop in unemployed workers. The rise in participation in older workers is an increase in these people working and in being unemployed.

We have a problem because people are not looking at the data at a deep enough level. The number of workers surged last month. They could have been reported as surging even more than they have. Unemployment is astonishingly low. Participation is even more remarkable - it is so low by historic measures,. The participation rate is rebounding.  We still have millions of "missing participation" that are forcing the effective unemployment rate higher than is being reported. We will have to absorb these workers before wages will really start to rise.

The number of "unemployed workers" has fallen since 2007 for those under 55 and rise for those over 55. Once again, some of this is age shift. Younger workers tend to have a higher unemployment rate because they are still in high school, college, or graduate school. They are not actively seeking work so they are neither employed or unemployed.This thing to note here is that there are older workers out of work, searching for work. 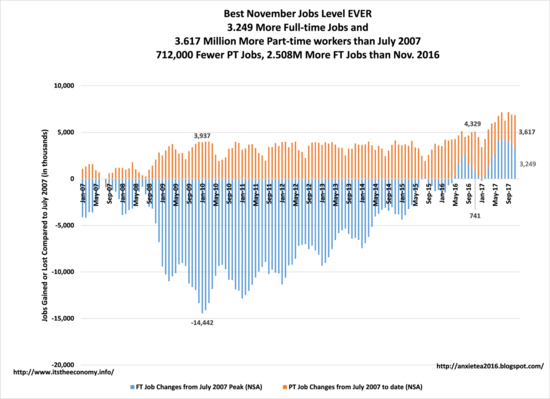 The November Employment situation report was released two weeks ago. The data was solid. The reporting on the data was modest, at best.