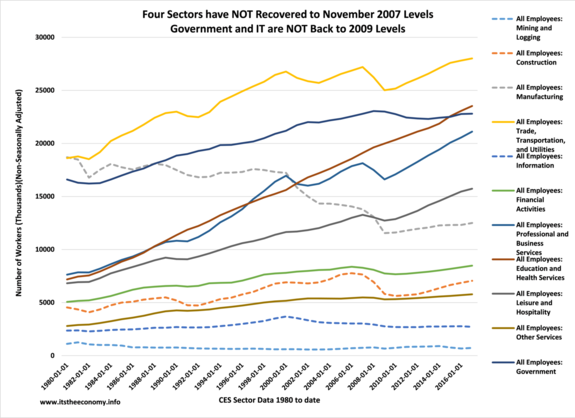 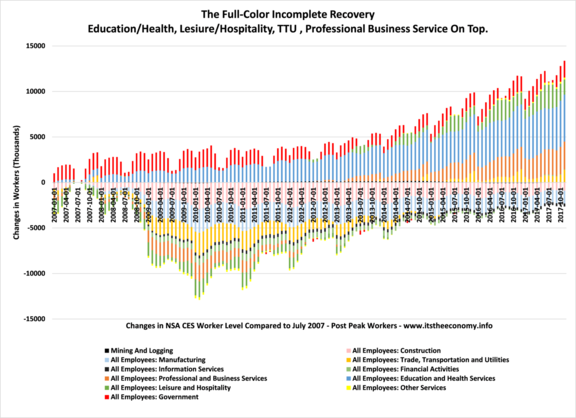 Not All Recoveries are Created Equally

The Monthly Jobs Report was released two Fridays ago.  We saw a solid increase in Jobs and Workers. We saw a drop in two job workers as people appear to have been able to replace two jobs with one. This column has produced the articles:

The question is which sectors are doing well? We know from previous articles regarding the sector data that some sectors have not returned to pre-recession levels: Information Technology, Mining and Logging, Construction, and Manufacturing. We know from the ADP Jobs Report article that the seasonally adjusted job numbers are down month to month and November to November for IT. What is happening with the non-seasonally adjusted data. The ADP data revealed seasonally adjusted month to month decreases in jobs in the Construction Sector, the Natural Resources Sector, the IT sector and the Other Service Sector. the The Current Employment Statistics (CES) Data has some of the answers.

Four Sectors Still Have fewer Workers than July 2007. The recurring message here is that Mining and Logging, Manufacturing, Construction and IT have fewer workers than prior to the recession. Depending upon the month Mining and Logging has recovered or it has slipped below pre-recession levels. Fortunately, this is and has been the smallest sector. IT has been losing jobs since the 1990s. Construction is rebounding, Manufacturing is climbing slowly, and steadily, higher.

The Worker Iceberg is melting. This column has written numerous article regarding the "Jobs Iceberg." The iceberg was still evident as of January 2017. Any full-time jobs gained during the Spring, Summer, and Fall of 2016 were lost during January. All Presidents lose jobs during January, this is one of the reasons that this article wrote the "Four Presidents" series. What is interesting is that there was no "ice age" for the Education and Health Services Sector. Government saw some growth and some contraction depending on the month or year. Leisure and Hospitality (Green) and Professional Business Services (Orange) were two of the first sectors to recover from the recession, followed by Trade, Transportation, and Utility. There was a huge spike, MTM, in the Trade, Transportation, and Utility sector and a sizable drop in Leisure and Hospitality.

There were minor corrections to the September and October data. The most telling thing is that the gains in the private sector revisions were negated by the downward revisions to the government data.

The data was very good. It has been ignored due to a variety of obsessions with a Senatorial race in Alabama, a Senatorial Slight of hand over tax reform, and a Senator from Minnesota who won't resign in a prompt manner. 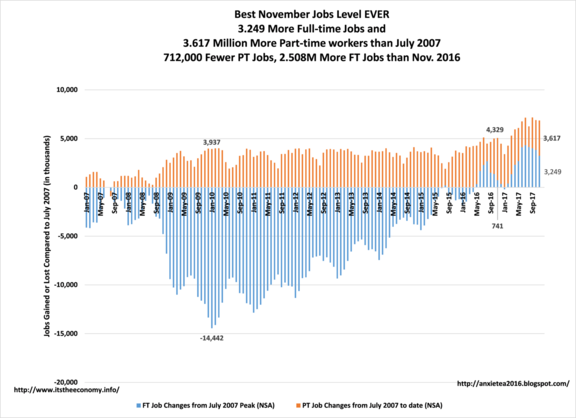