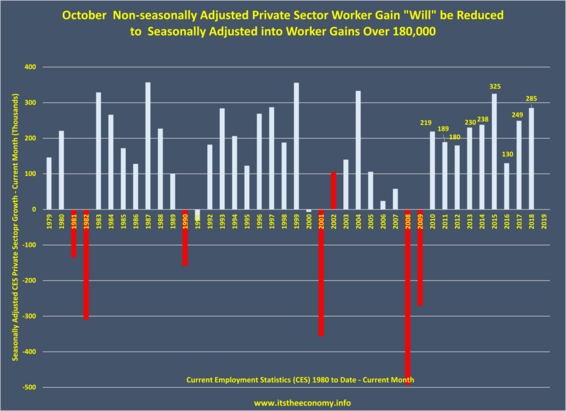 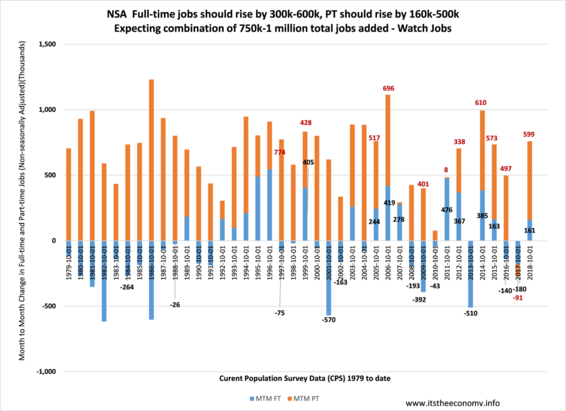 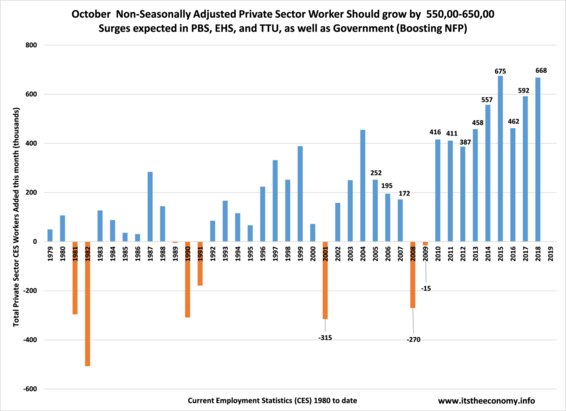 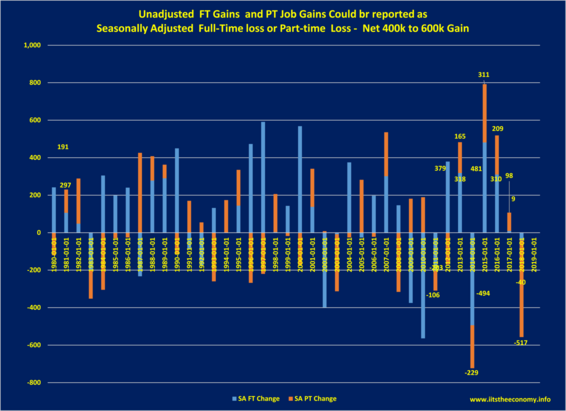 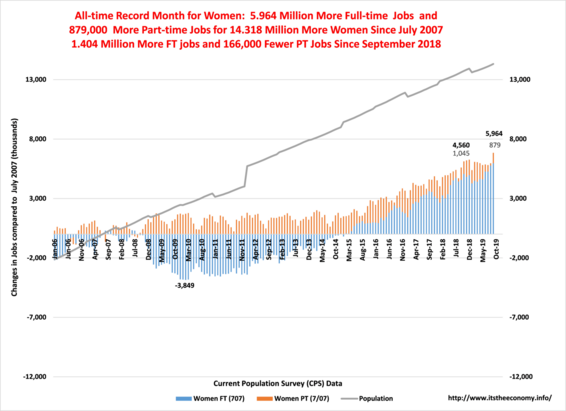 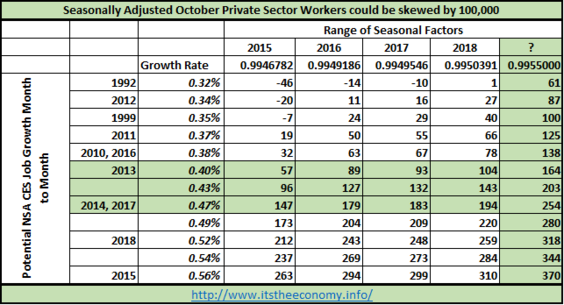 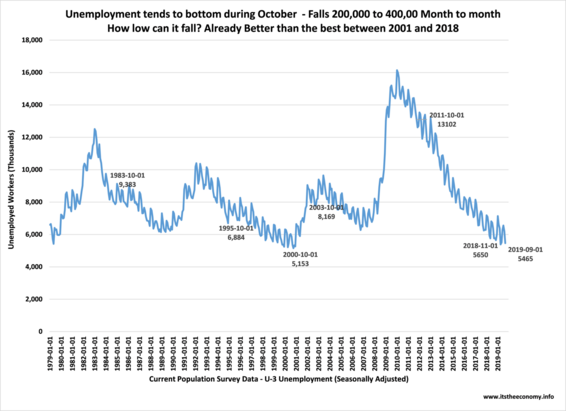 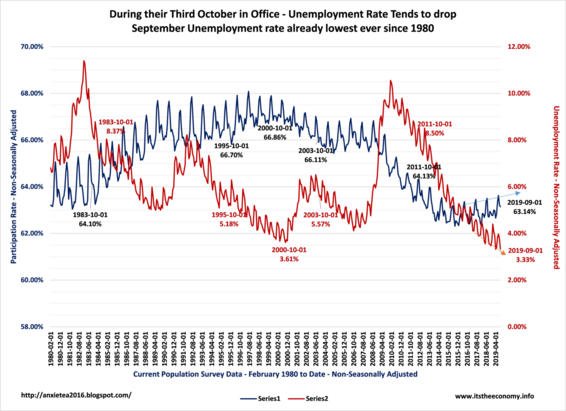 October Data Points to Spike in Workers and in Jobs

The monthly Employment Situation Report, or Jobs Report, is created using two different data sets. The Current Population Survey (CPS) Jobs and Unemployment data is one data set. the Current Employment Statistics (CES) Worker and wages data is the other data set. These data sets have been out of whack this year where some months the CPS data spikes and the CES data barely moves or vice versa. This month both data sets appear to be in sync for a push upward. This jobs report could throw off those who use the three month rolling average as their guide.

Non-Seasonally Adjusted Private Sector Workers number  should grow by 550,000 to 650,000 workers. We have added more than 400,000 NSA CES workers seven  of the past eight years. We have added 550,000 workers four of the past five years. We have added more than 650,000 workers during two of the past four years. The NSA CES month to month data indicates that there could be weakness in the Leisure and Hospitality (LAH) sector and the Manufacturing Sector. The largest growth, in percentage terms, are expected in Education and Health Services (EHS,) Professional Business Services (PBS,) Information (IT,) Trade, Transportation and Utilities (TTU,) and even mining and Logging (M/L.) Government sector workers may grow by the highest percentage. They are not included in the private sector calculations. The month to month data, as a whole, is pointing towards 0.40% to 0.49%.

The non-seasonally adjusted October to October data indicates that all sectors should grow. The largest growth is expected in M/L, Construction, PBS, EHS, and LAH.  This is important because our largest sectors are the TTU, EHS, Government, PBS, and LAH. If the largest sectors have the largest percentage growth then we could see a big number. We are at a record level of September Private Sector Workers. The growth rates can slow while the real number of workers exceeds prior year levels. The October to October growth rate is expected to drop from the 1.55% of August and the 1.52% of September to possibly 1.46% or 1.49%.

We should add over 200,000 Seasonally adjusted Private Sector workers. The seasonally adjusted month to month shows that the number of Government workers and the number of Manufacturing workers could grow or contract. All other sectors are expected to grow month to month, seasonally adjusted. The largest growth sectors are expected to be M/L, LAH, IT, Construction, and PBS. We could see a drop in manufacturing workers due to the GM strike. It depends how striking workers are counted in the data. They may be in limbo as their are neither employed (being paid) nor unemployed (receiving benefits.)

We should see a spike in Full-time (FT) jobs and an uptick in Part-time jobs (PT). It is possible to see a drop in NSA FT workers and an increase in NSA PT jobs. The data from October 2017 was unusual because we saw a drop in FT and PT jobs and a near record increase in NSA CES workers. We could easily see an increase of 500,000 NSA FT jobs and an increase of 200,000 to 300,000 PT jobs. We saw the economy add nearly 1 million total jobs during October of 2014.  The combinations mean that we could see 500,000 to 750,000 jobs created this month. This is not the headline "Establishment" data. This is the "Household" data.

The Seasonally Adjusted CPS jobs data indicates that we should see a modest spike in seasonally adjusted jobs. We saw a larger than expected spike during 2015 (pre-election year) than the NSA CPS data would have indicated. Conversely, the 2018 NSA CPS data was recorded as strong during 2018 and reported as contracting.

The number of participants joining the workforce should be greater than population growth. There were 131.7 million full-time jobs, 26.8 million PT jobs and 5.5 million unemployed workers for 163.9 million participants. We should add 750,000 jobs and reduce the unemployment level by 300,000 for a net gain of 450,000 participants. Last month the population grew by 206,000 workers. More new participants than new potential workers means the participation rate should rise this month.

The ADP data was pointing to possible weakness in Mining and Logging (Natural Resources.) The ADP data is private sector payroll data, seasonally adjusted. The ADP data is similar to, not identical with, the CES worker data. There is no delineation between full-time and part-time jobs. The CES data is comparable to, and different from, the JOLTS Job Opening Data. None are comparable to the CPS unemployment and jobs data. Comparisons between job openings an unemployment are misguided. The ADP data only gives us a potential insight in to the CES private sector data. The ADP data and the Private Sector CES worker data rarely align.

There are a number of ways to examine the data. This month the CES and CPS data are both pointing towards a substantial uptick in non-seasonally adjusted workers and jobs, respectively. Unemployment should drop to seriously low levels. Participation should rise. Wages have been rising all year. Wages should set October records across the board in all ten private sector major sectors.  Get ready for some records to be set.