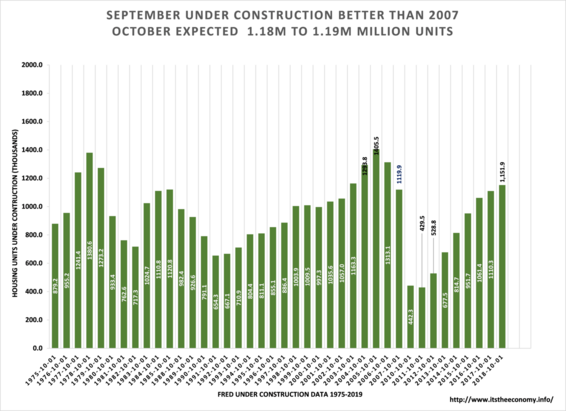 If We Get Good Real Estate News Will It Be Reported?
Starts, Completion, and Sales Are Improving - Should Continue

Instead the media focused on declining sales, or starts on a seasonally adjusted annualized basis. Hint: Things slow down when it gets colder.

Expectations are for the month to month data to change by either plus or minus 4%. Same month growth is expected to grow by 3% to 8%. This means that we should see a minimum of 77,000 starts and the potential for 84,000 starts. We should see well above 75,000 starts and could anticipate 80,0000 single family starts.

Expectations are for Units Under Construction to grow month to month and October to October.  This month the Under Construction data is expected to edge higher from last month's 1.178M units  and last year's 1.151M units  to between 1.179M and 1.192M units. This will appear as a relatively significant spike.

The New Construction data will be released this Tuesday. Tomorrow morning we will receive data that is cooler than last month and possibly "warmer" than last October. People in the media will focus on the trend rather than the expectations. Will we see October and December spike in Starts, as we did during 2017? Will we see a drop in Completions during October followed by a spike in November, as we did during 2017? If the seasonally adjusted annualized starts and completions bump higher will that cause commentators to finally note that we are on-track for one of our best years since 2007? If completions and starts uptick, just not enough to move the seasonally adjusted annualized data higher will Trump Derangement Syndrome rear its ugly head and be touted as a sign of an Economy in decline rather than a decline that happens "every" year around this time?

Thursday we will receive the Existing Home Sales data. We "normally" sell roughly 450,000 units during October. We also "normally" have 2 million units for sale during the course of most months of the year. Inventory started declining during 2015. Sales have attempted to keep pace with demand. Existing home sales, and especially new home sales, help spur Retail sales, especially Building Material and Garden Equipment (BMGE) sales and Furniture and Home Furnishing (FHF) sales. It is also clear that, as with the construction data, the sales data was held back earlier this year as a result of the Government Shutdown.

Inventory normally is expected to grow year to year and possibly decline month to month during October. These are mutually exclusive this year. We cannot both decline month to month and rise October to October. last year we had 1.848M units in inventory while last month we only had 1.827M units in inventory. Inventory was expected to decline significantly last month and remained relatively stable. We appear to have ht bottom during December of 2017. The "annualized inventory" is expected to decline. Inventory "peaked" during June this year, for single family homes, at 1.700 million.  The seasonally adjusted annualized sales data peaked during August. September to October single family homes dropped by 30,000 units last October. Condominium inventory fell by 3,000 units last October. If we record similar drops in inventory this October we will fall below 1.800 million units. We may be fortunate if we see 1.808 million units in inventory. It is possible for a spike to over 1.850 million units if people placed their homes on the market over the Labor Day weekend in hopes for a quick sale, in an effort to take advantage of low inventory levels. Don't be surprised if there is an uptick or a downturn in inventory. We may see a level around 1.825 million units. Inventory could drop October to October and could be up month to month.

Current year sales are expanding. We should go positive before the end of the year. Rolling year sales are also pulling higher month over month. We have seen some dramatic same month growth this year. Same month sales spiked by roughly 3.5% during July and over 7.0% during September. a 3% pop would place us at 458,000 units while a 7% pop would garner nearly 475,000 units. Heads would explode if we hit 475,000 units. Expect a 450,000 number and do not be surprised by a 460,000 number for units sold.

Month to month decline is seasonal and expected for existing home sales during October. People want to move during the end of May (Memorial Day Weekend, during  the end of June and beginning or July (Fourth of July Week) or during the end of August and beginning of September (Labor Day Weekend.) They want to be in their new residence for Thanksgiving and Christmas. The real estate market, especially the existing home sales market, is transitioning to better market conditions for sellers. Declining conditions are usually fairly consistent. Improving conditions come in fits and starts.

New Home Sales  are expected to grow October to October, and possibly month to month. New Home Sales data will be released next week.  The number of October sales last year were lower than anticipated, making this year an easy year to see comparable sales spike. That said, normally new home sales peak during April or May, not April and June. Some of this could be that new home builders are building homes priced to substitute for missing existing home sales inventory. New home sales should drop month to month. They could rise month to month. This year the CM data has been very strong. Last year we had 43,000 units sold, down from the 49,000 units sold the prior October. Another 49,000 unit month could be seen as improvement from last year. The month to month data indicates 50,000 to 58,000 units could be sold. The October to October data is leaning between 46,000 and 53,000. The same month spikes mean that 53,000 to 58,000 is a distinct possibility.

Inventory has been growing year over year since the bottom of the Great Recession. It is difficult to sell what isn't available for sales. It is "impossible" to sell something that isn't for sale. Inventory should grow 1% to 3% this month and 3% to 17% from last October. The problem here is that sales have been taking larger chunks out of inventory than completions have been filling them. We need to have a 3% MTM growth to return us to last year's October level of inventory. We would need an 11% spike in month to month inventory to achieve a 7% increase October to October. The largest spike month to month during October is 5%, followed by 3%. Expect inventory to be recorded around 330,000 units, or roughly 3%.

We have had 49,000 to 68,000 new homes sold each month this year. The trend this year is for this year to outperform last year's current month sales by a wide margin. Average sales prices have been rising, in general, and should continue to rise, unless builders start building lower priced homes to take advantage of a lack of supply of existing homes for sale. Inventory should decline as builders try to clear inventory before the end of the year, and yet, they also want to build inventory to sell more units next Spring.

Builder Confidence is High. The builder sentiment report was released while this article was being written. Sentiment is confidence. Last month the Sentiment was recorded at 71%. This month it was 70%. Some in the media (CNBC, Bloomberg, Marketwatch) will proclaim that confidence is waning. last November the sentiment was 60%. A 10% spike is impressive. It is also the highest November sentiment level since November 2004 when it was also recorded at 70%. 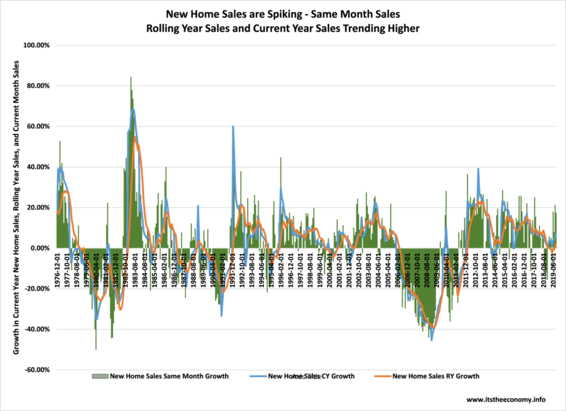 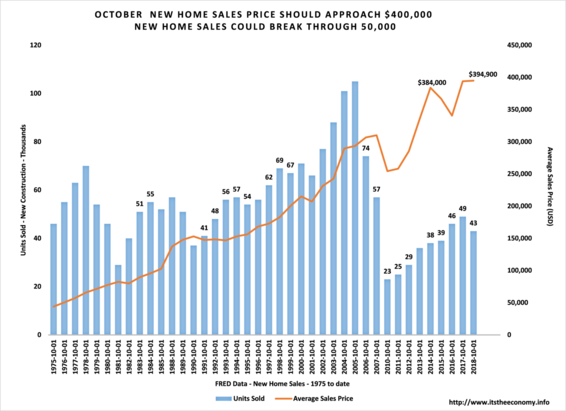 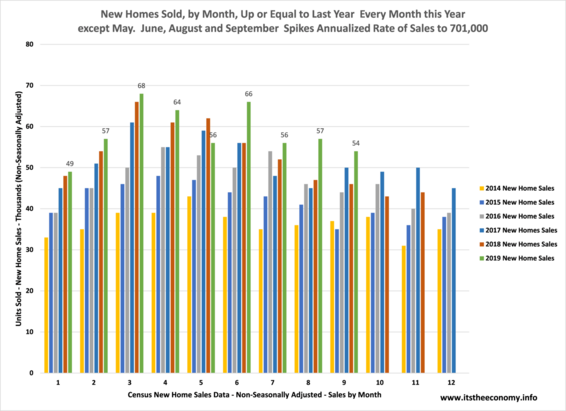 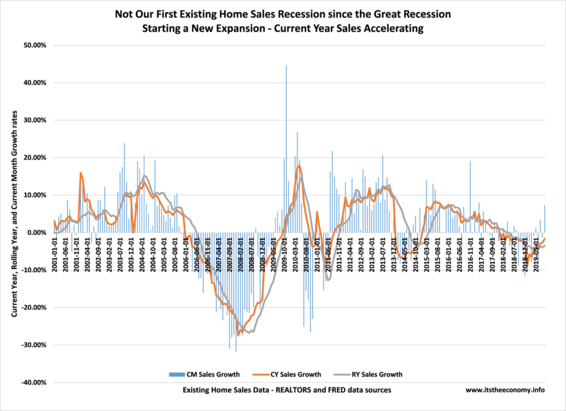 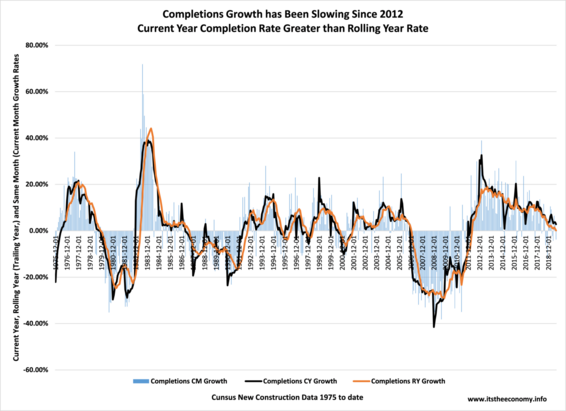 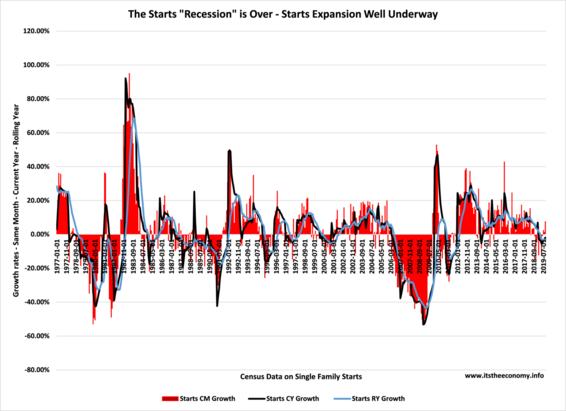 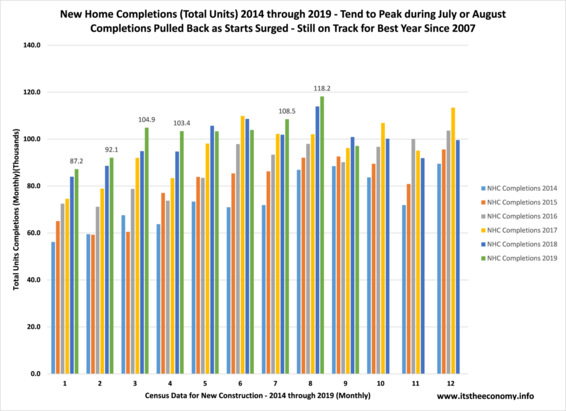 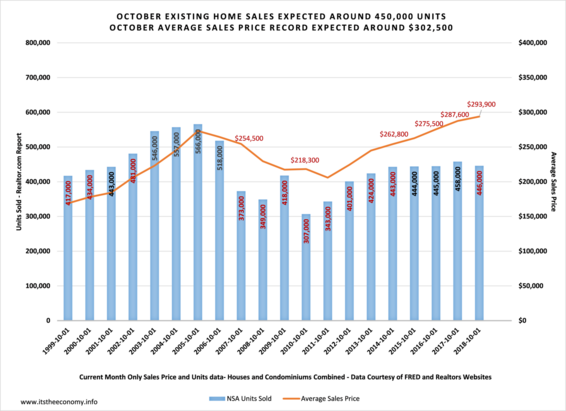 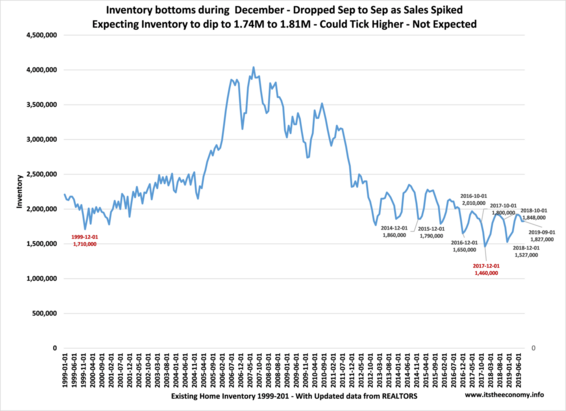 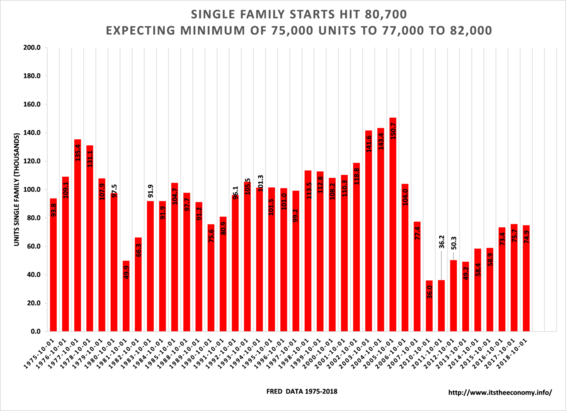