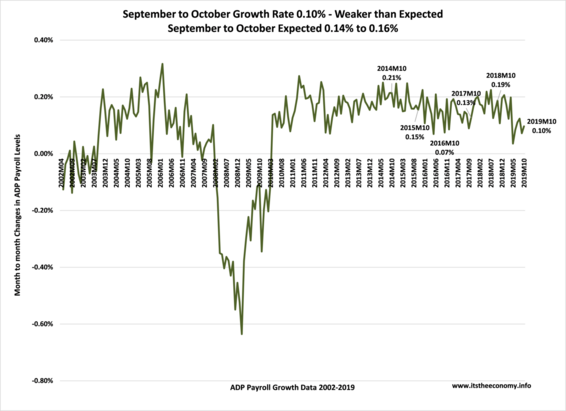 Expected Month to Month, and Oct to Oct ADP Growth in All but One Sector

The ADP Private Sector payroll report is released the Wednesday before the the Monthly Employment Situation Report. This Wednesday is ADP Wednesday. The seasonally adjusted data is pointing toward growth month to month and October to October in all but one sector. Could we see growth in Mining and Logging (Natural Resources) and make it ten for ten? Month to month growth was expected in all sectors except Natural Resources. The estimate was 181,000 to 207,000 workers added based on month to month data, 170,000 to 246,000 payroll positions based on the annual growth,  and seeing as we have added 1.5 million positions year to date we should add 165,000 to 170,000 based on the current year data.

Month to month growth was expected in all sectors except Natural Resources. We know that the "rig count" for oil extraction have decreased during the past few months. That said, there is more to the "Natural Resources" sector, or Current Employment Statistics "Mining and Logging" sector, than just oil production. The largest growth, in percentage terms, is expected in Education and Health Services (EHS,) Leisure and Hospitality (LAH,) Construction, and Trade, Transportation, and Utilities (TTU.) A wild card is the Information Sector. Last year there was an October Spike in IT payroll. It was expected that we could see 0.14% to 0.16% month to month growth, or roughly 181,000 to 207,000 total new payroll positions. If we grew at last year's 0.19% then we could see 246,000 positions added. That was unlikely to happen.

The October to October data indicated that all sectors should have grown except Natural Resources. The year over year growth has been declining since the February revisions to the ADP data. Last month we grew at just 1.66% annually. This month we could have seen growth between 1.60% and 1.69%. If we grew at just 1.60% then we would have added 170,000 positions.  The sectors where we were expected to see the best growth are in Construction, EHS, Professional and Business Services (PBS, LAH and Financial Services (FIRE.)

October to October growth was up in all sectors except Natural Resources. The largest growth rates were reported in Construction, EHS, PBS, LAH, and TTU. There was a drop of over 2% in seasonally adjusted payroll positions in Natural Resources.

Watch the revisions. Last month the headline ADP was reported at 135,000. This was revised to 95,000. This means that this month could have been reported 40,000 positions lower than it was reported. There was a slight upward revision to the August data.

The ADP Payroll data is different from the "Employment Situation Report" data. The Employment Situation Report data is comprised of the Current Population Survey (CPS) data on jobs and unemployment, while the CES (Current Employment Statistics_ data is focused on workers and wages. Then there is the JOLTS Job Openings and labor Turnover Survey data. The JOLTS data does not delineate between full-time or part-time jobs, and therefore is most like the CES worker data. The Media loves to compare the JOLTS data with the CPS unemployment data. Different data sets have different margins of error. Each data set has different seasonal factors depending upon the month, season, or year. Comparing seasonally adjusted data from three data sets is unwise.  We might as well be comparing October data on indoor air temperature in Ojai, CA, Oconomowoc, WI, and Ocala, FL as seasonally adjusted CES worker data, ADP payroll data, and CPS unemployment data.

The data is looking good. All sectors added to their payroll October to October. The sectors that saw the most growth are the sectors that have had the most Job Openings, Hiring, Separations and Quits according to the JOLTS data set. Again, it is dangerous to compare the results of one data set with that of another data set. Next month when the October JOLTS data is reported we may see a drop in Job Openings and increases in hiring in EHS, LAH, PBS, and TTU. 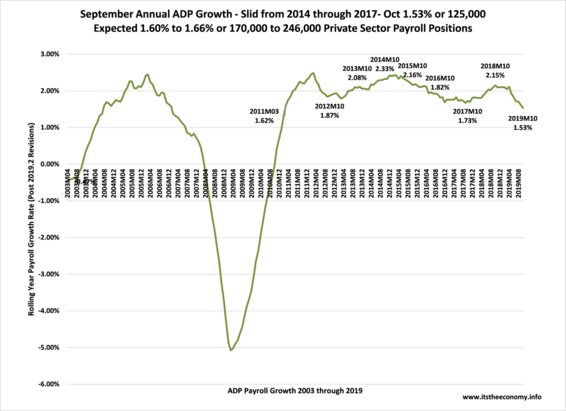