The monthly Employment Situation Report, or Jobs Report, is created using two different data sets. The Current Population Survey (CPS) Jobs and Unemployment data is one data set. the Current Employment Statistics (CES) Worker and wages data is the other data set. These data sets have been out of whack this year where some months the CPS data spikes and the CES data barely moves or vice versa. This month both data sets appear to be in sync for a push upward. This jobs report could throw off those who use the three month rolling average as their guide.

Non-Seasonally Adjusted Private Sector Workers number  was expected to  grow by 550,000 to 650,000 workers. The non-seasonally adjusted October to October data indicates that all sectors should grow. It was projected that we  should have added over 200,000 Seasonally adjusted Private Sector workers. The Seasonal Factor has been drifting higher for years, skewing the data higher than expected. So what happened?

We saw 556,000 Non-Seasonally adjusted Private Sector Workers added during October. We also had 25,000 workers added to the August data and 73,000 added to September. If that 73,000 was added to the 556,000 that was recorded then we would have added 629,000 workers. The "Workers and Wages" Article will break down the changes by sector.

Did we see 131,000 Seasonally Adjusted Private Sector Workers added during October or 225,000 Workers? The "experts" were predicting fewer than 100,000 non-farm payroll workers added. The August data was revised up by 41,000 private sector workers. The September data was revised up by 94,000 workers meaning that instead of growing by 114, 000 workers last month we grew by 167,000. That 94,000 total jobs added to September (41k to September + 53k to September)  could have all been added to October and given us 225,000 private sector workers added.

A spike in Full-time (FT) jobs and an uptick in Part-time jobs (PT) was expected. The Seasonally Adjusted CPS jobs data indicated that we could see a modest spike in seasonally adjusted jobs. The Unemployment Level and Unemployment Rate were both expected to drop. The Participation rate should climb from last year's level. What was recorded and what was reported in the Current Population Survey (CPS) data?

There are a number of ways to examine the data. The ADP data that was released on Wednesday was a bit of a disappointment. The September data was revised lower from the advance value. The October data was weak. The ADP data is comparable to, not identical to, the CES worker data. Will ADP be revised higher next month? Time will tell. This was a strong report. The next article will address the changes in workers and wages. 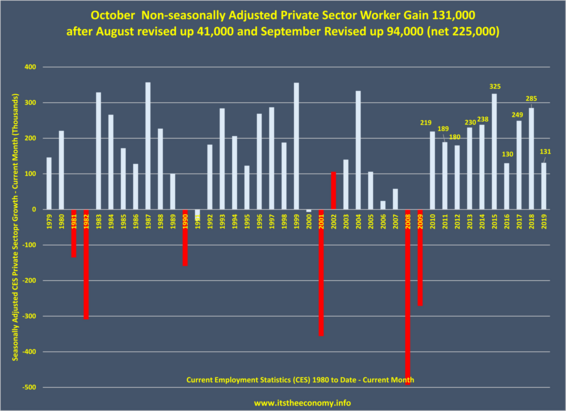 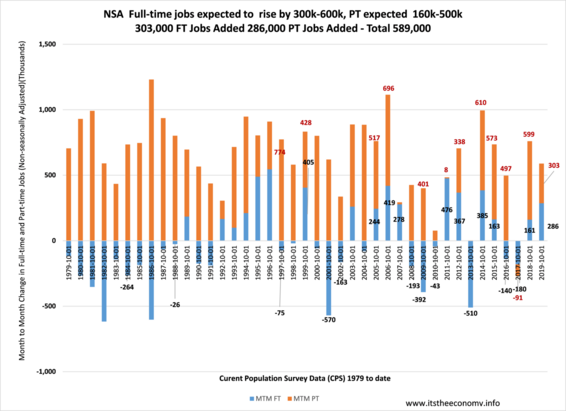 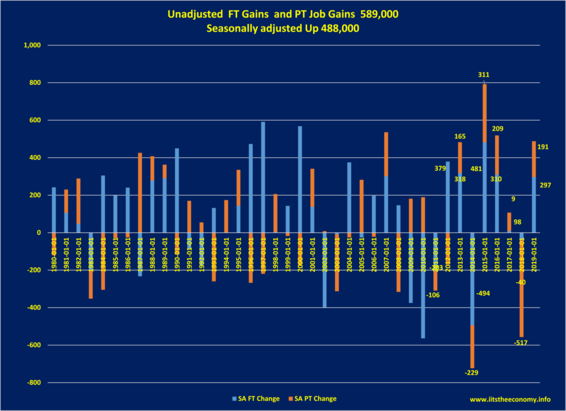 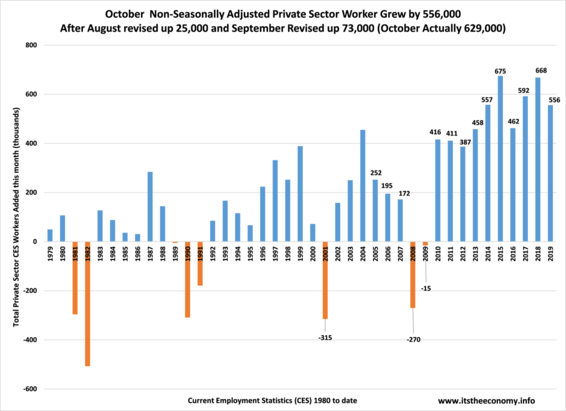