Not too Hot, Not too Cold. Better than where we were during

There have been numerous articles elsewhere regarding a "slowing housing market." The problem is that most articles are written using the seasonally adjusted data, at best, or the verbiage of the actually reports, at the worst, regarding new home construction, new home sales, or existing home sales. This year we have been ahead of where we were during 2016 and 2017 every month since January. There has been some weakness in existing home sales this year, in part, because of a lack of inventory that has been present since December of 2015. This column produced a forecast article regarding the new home construction data, the existing home sales data, and the new home sales data titled "October Real Estate Forecast: Banging Ahead." The data was examined by looking at same month growth, month to month changes, current year statistics, and rolling year statistics for the past twelve months. The projections for new construction were:

This data is important because new homes "require" new appliances, new electronics, new home furniture and furnishings, new Home and Garden Equipment, and often a new car. New construction helps build the inventory and inventory is required to make sales. The Great Recession was a Housing Recession first, a jobs recession second, and a retail sales recession third. The Retail Ice Age has been replaced with the Retail Renaissance. The "Jobs Iceberg" has melted and we are now climbing the Jobs Mountain. What was recorded, non-seasonally adjusted, and what was reported, seasonally adjusted in the October New Construction Report?

New Home Starts missed slightly with 74,600 Single Family Starts. The starts data were revised for August to 80,800 and 75,300 for September. Starts tend to slow as the weather turns cold, and then completions and under constructions rise so that there is housing stock for sale after the first of the year. This miss is still better than what we had during October of 2008 through October 2016. This may just be a blip.

Units under Construction broke through the 1.15 million unit level. The new home sales market has been restricted by the amount of inventory. It is "impossible" to sell what isn't built. People can build custom homes. It is a challenge. It is "hurry up and wait." I would rather pick a built house and choose the cabinets, counters, tile and carpet. We may see a slowing in the growth rate of units under construction during the next few months. "Trees don't grow to the sky." Actually, they do grow to the sky. They just don't grow through the atmosphere.

Completions of units dropped below 100,000 units. This is a slight drop from October 2017 and is still better than October 2008-2016. The new home market is still in recovery mode, it is not in expansion mode. It may not be advantageous to return to 2004, 2005, or 2006 levels of starts and completions. The general consensus was that we were "overbuilt" prior to the Great Recession. 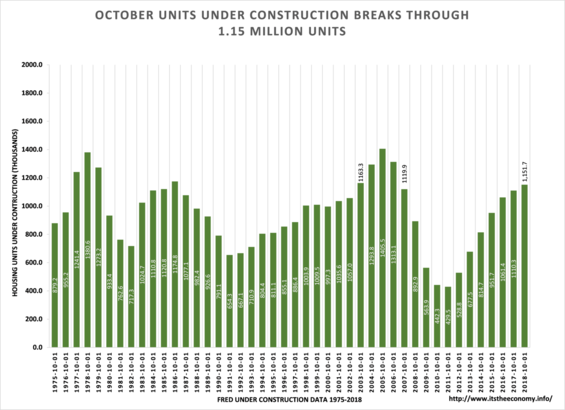 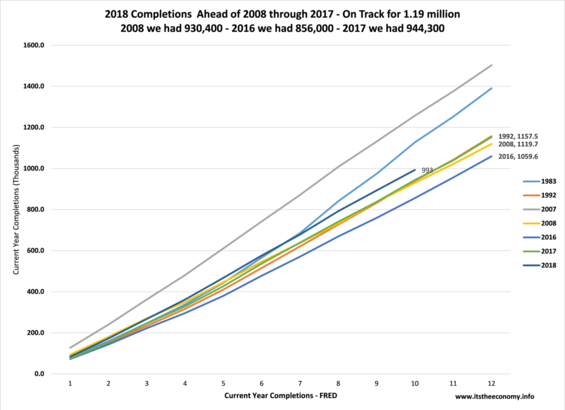 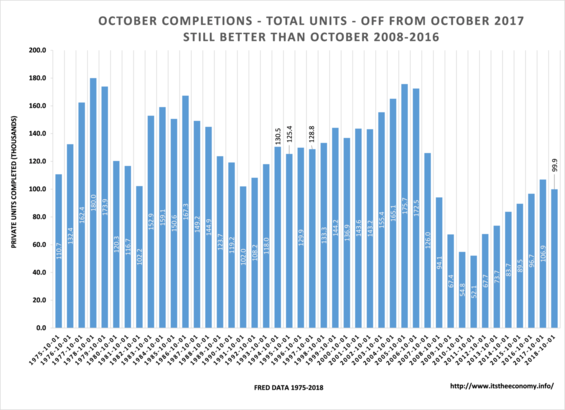 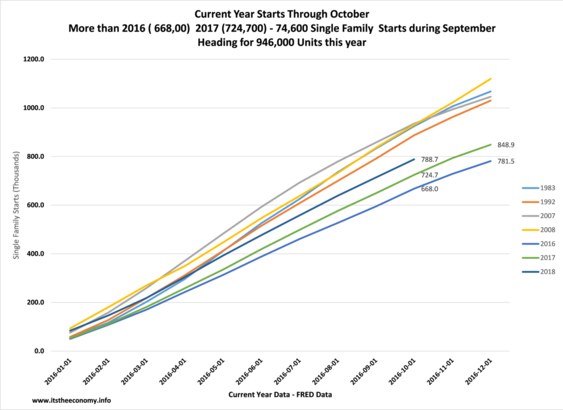 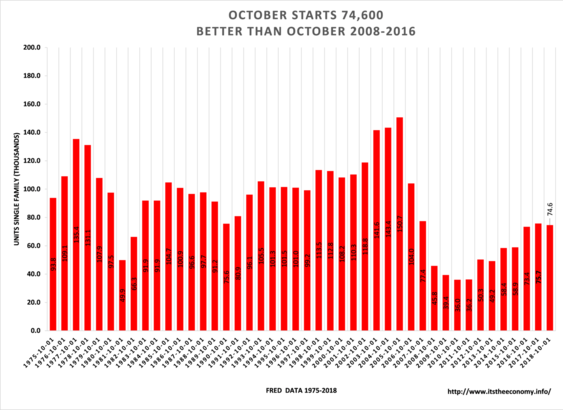