The New Construction Starts Number almost hit 75,000 units. It was thought that we could break through the 75,000 ceiling this month. This data is still better than any October between, and including, 2008-2016.  It is important to note that we had more October starts during October 1990 through 2007. The Rolling year data is  838,000 units. The Current Year sales is at 724,200 with two months remaining. last year we were at 675,800 so we are 69,600 units ahead of where we were last year. Last year we sold 789,300 units. This means we could exceed 850,000 starts this year. The CY starts data is trending higher than the RY data so the Starts numbers are expanding.

The Under Construction data hit 1.108 million units - up from September. We need units under construction so that we can feed into the completions data which feeds into the sales data. We have rarely eclipsed the 1.1 million unit level: 1984-1986 and 2003-2007. We saw peak new and existing home sales during 2005. Will we see 2005 levels of sales during the next 3 or 4 years or the next 30 years? That sounds harsh. It was a housing recession. WE lost decades of new construction data. There is no RY or CY data because the under construction data is a "rolling" piece of data as starts feed into the data and completions leave the data.

The Completions data "rocked" to 111,400 units. We did see over 100,000 units completed during September of this year. We have not seen over 100,000 completions during the month of October since 2007. The Rolling year level is 1.154 million units. The current year data is 954,600 units with two months remaining. Last year we stood at 854,7000 units and ending up with 1,158,000 completions. Last year we had 1.058 million completions so we could hit 1.158 million units. We are slightly ahead of where we were during 1992 when we had 1.160 million completions. The current year data is trending above the rolling year data so we are still on an upward swing here, too.

This was a significant housing construction report. We saw completions surge by 14.46% over the September level of completions. We saw the Completions data expand by 15.41% compared to October of 2016. Starts are still improving. The under construction data is still improving.  New construction spurs more hiring in the construction sector. New construction normally spurs furniture sales, electronics and appliance sales, and even new auto sales (have to place a new car in a new garage.)  The Rolling Year data looks great, compared to where we have been during the past decade. The Current Year Data looks great. This should feed into an even higher GDP than was reported during the second or third quarters of this year. Add that improvement to the improvements in the retail sales data and we could see a 4% annualized GDP rate during the fourth quarter and a Real GDP value of over 3% for the entire year. 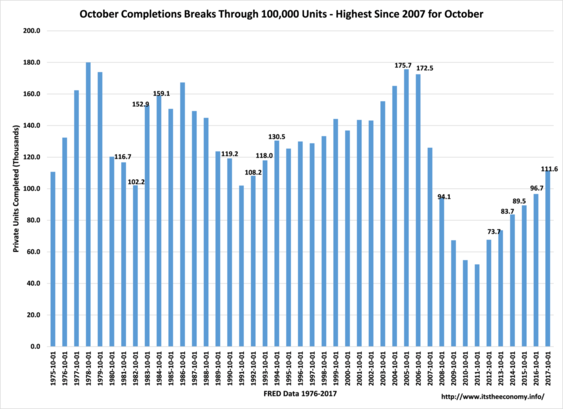 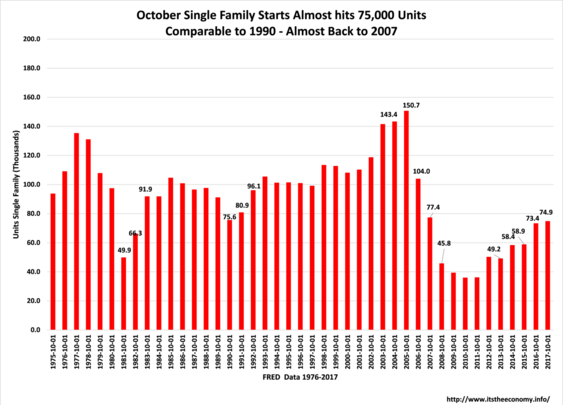 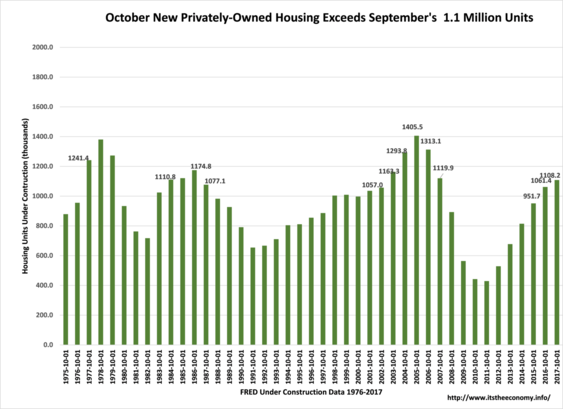