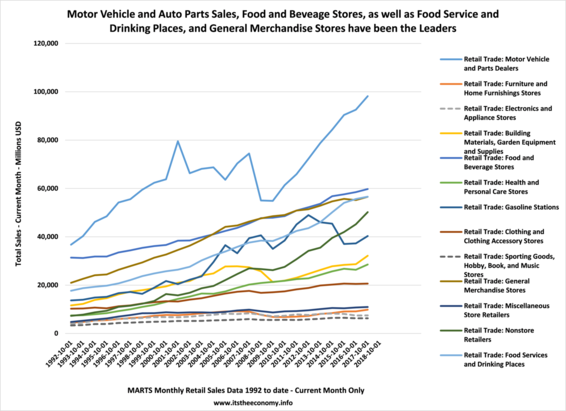 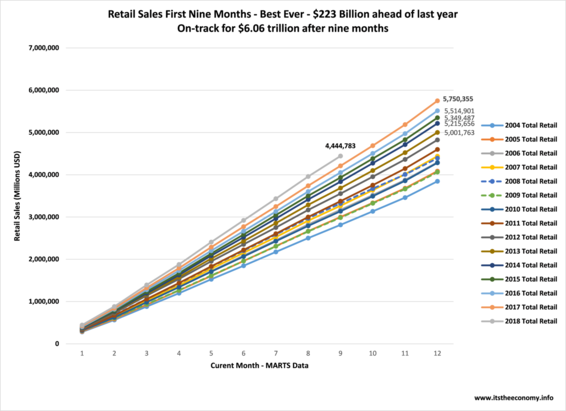 The Retail Renaissance is Real

The Retail Sector is one of the important sectors of the economy to observe, included along with Employment, Unemployment, and Housing. There has been reckless banter that we have been in a Retail Ice Age because we have empty storefronts. The truth is that we have been in a Retail Renaissance. We had a recession that was actually many recessions rolled into one Great Recession: A Housing Recession, a Jobs Recession, a Retail Recession, and a Government Revenue Recession. We recovered from the retail recession first, We covered from the jobs recession, finally recovering all the lost full-time jobs and maintaining them, only during February 2017. Existing Home sales are catching up with the 2002 and 2003 levels. New home sales are stuck in the 1990s. All of these things are interrelated. More full-time jobs, more people earning more money. More full-time jobs allows more people to buy and sell homes. More home sales means more retail sales.More sales means more jobs and the cycle repeats. There are many ways to examine the data. Month to month growth gets the majority of the headlines, especially seasonally adjusted (SA) growth . We can also look at the same month growth, the rolling year growth (the prior twelve months,) and the current year growth (January through October.) The best way to examine the data is the non-seasonally adjusted (NSA) data because the seasonal factors used to convert the NSA data to the SA data change category to category, month to month, season to season, and year to year.What can we expect this month?

Month to Month is expected to be the largest in Non-Store Retail. It is also anticipated that we will see growth in Miscellaneous Sales, General Merchandise Sales, and Personal Care Sales. All sectors should grow month to month. There also should be one or two sectors that dip a bit month to month. The category that dips changes from year to year.This year it is anticipated that we will record a drop in Motor Vehicle and Parts (MVP) sales, Electronics and Appliances (EAS) Sales, Sporting Goods, Hobby, and Books (SGHB) sales, and possibly a gain or a drop in Furniture Sales.

October to October only Sporting Goods, Hobby, and Book sales (SGHB) are expected to drop this year. The largest gains are Non-Store Retail (NSR) sales and Health and Personal Care  (HPC) sales.

Current Year data shows us We are on track for our first $6 trillion total retail sales year. We are $223 Billion ahead of where we were during September of 2017.If we continuing growing at 5% a year, and we should, we will hit 6.04 trillion dollars in sales.

Seasonally Adjusted October to October Growth should be reported in all sectors except, possibly, Sporting Goods, Hobbies, and Books.  The rolling year growth rate has also  been over 65% the past four months. It was 5.03% during June, then 5.27%, then 5.50%, and finally 5.46% during September. If we continue growing at the same pace as we are right now the SA MARTS data for the year should hit $6.07 trillion

Max Earnings? Max Sales?  There is chatter that we are approaching "Peak Earnings" right now. We have seen double digit growth each of the first three quarters of the year. Some quarters we have seen 20% average growth. There is 'fear" that as workers are lured into the workforce with higher wages and better benefits that profits will fall. Earnings and profits are totally different things. The NSA Annual Retail sales has risen every year since 2010. This year should end with higher sales than 2017. Will rolling year sales exceed 6%, or 7%, or even 8% before sliding lower? time will tell.

Watch the revisions. Last month we saw significant upward revisions to the July MARTS data. If we see upward revisions to the September data then the month to month (MTM) data may not grow as much as anticipated, and some sectors that could have recorded NSA MTM growth could record NSA MTM declines. This could also impact the SA MTM data, depending upon the seasonal factors used to convert the NSA data to the SA data that is reported in the media. 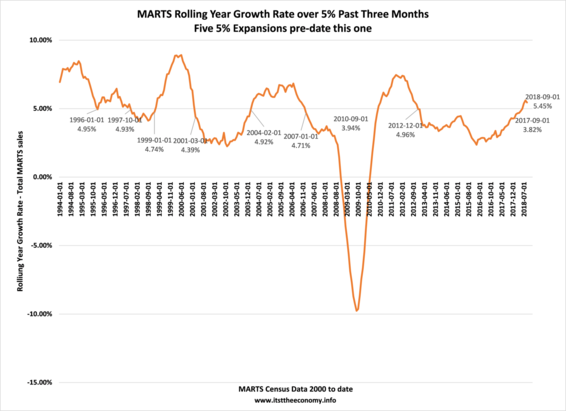