The first Friday of the month normally means that we receive the monthly Jobs Report. The jobs report includes data from the Current Population Survey (CPS) regarding changes in full-time jobs, unemployment. This data is then uses that data to calculate the workforce participation rate and the unemployment rate. A second data set, the Current Employment Statistics (CES) data is used to measure the number of workers. An important piece of data to watch is the number of people working two jobs. The October Job Forecast article projected worker growth comparable to what we have seen during October of 2010 through 2013. October of 2015 we saw a huge spike in workers. The biggest question for this month was seasonal factors be?" The seasonal factors change from month to month and year to year, as well as category. The basic expectations coming into the jobs report were that non-seasonally adjusted jobs would jump, workers would jump, unemployment would fall, and participation would improve. The Seasonally adjusted data, the data that is reported, indicates that we could see a drop in jobs and a drop in unemployed workers which would mean a reported drop in the participation rate. Up could be down. The other analysts are anticipating a number of over 300,000. The worker number soared. The jobs number dipped. Unemployment fell. Participation Fell. We are still at the highest level of jobs for the current month than any prior October.

Headline Number: Private Sector Workers Soared by 252,000 non-seasonally adjusted workers. The headline number masks the even larger NSA CES surge of 603,000 workers. It has to be noted that both the August NSA CES number and the September NSA CES numbers were revised higher. August saw an upward revision of 20,000 workers. September saw an upward revision of 65,000 workers. This means that the seasonally adjusted data was also revised higher. Last month's "loss" was converted to a gain of 15,000 workers. This is not making any waves in the media. The growth rate was better than 2016and better than every October since 1980 except 2015.

The Seasonally Adjusted Growth rate was lackluster - Still Twice as many workers added as compared to October 2016. The seasonally adjusted data was comparable to 2010-2014. The upward revision to the September NSA CES worker level reduced some of the bump.  The seasonal factor was virtually identical to last year's seasonal factor. The takeaway here is that the SA CES private sector worker bump was twice that of October 2016, 247,000 versus 123,000. This is also being ignored elsewhere.

Full-time Jobs Fell - non-seasonally adjusted. This was not expected. It was thought that we would see a surge in seasonal full-time jobs. This may be because we did not lose as many full-time jobs during September as we could have lost. The part-time increase was expected. It was a little less than October 2016. There still was a net real job loss - possibly a delay in seasonal releases for September.

The October Jobs Report was very strong. August and September saw upward revisions to the NSA CES worker numbers. Unemployment fell. There was a slight drop in non-seasonally adjusted CPS Jobs - a drop was expected for PT jobs, not full-time jobs. This may be carryover from last month when fewer FT jobs were lost than was expected. We have the highest level of October Jobs ever. Full-time jobs remain near the historic high level of July. There are fewer part-time jobs than January 2010. More people were working multiple jobs this month than last month. They were "over participating." This was anticipated. This was a solid jobs report following solid revisions to the August and September data. 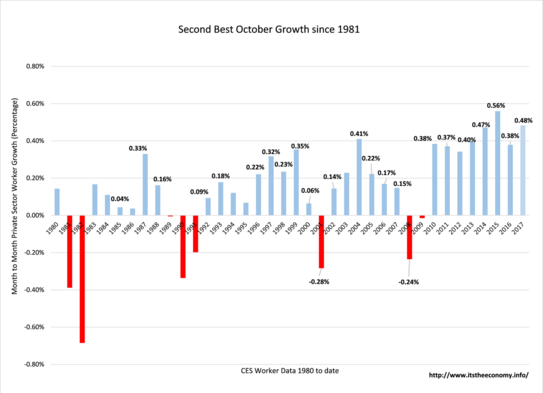 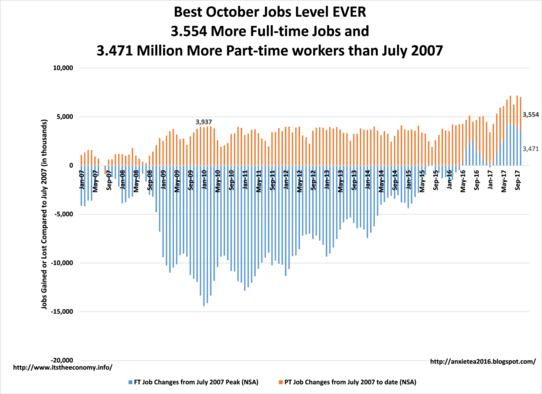 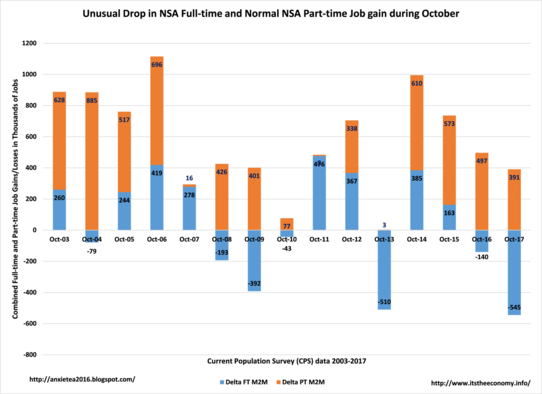 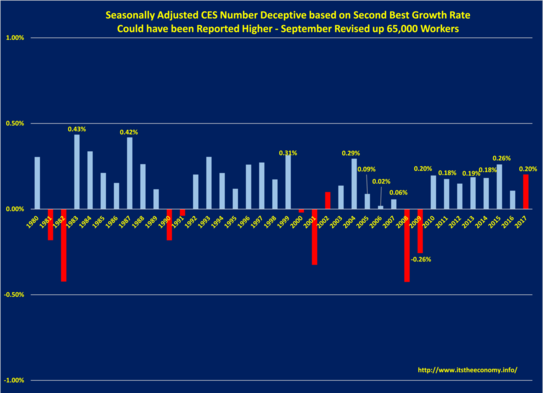 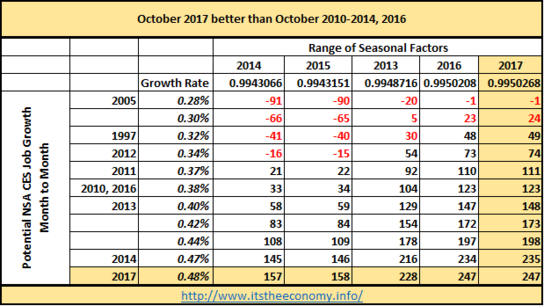 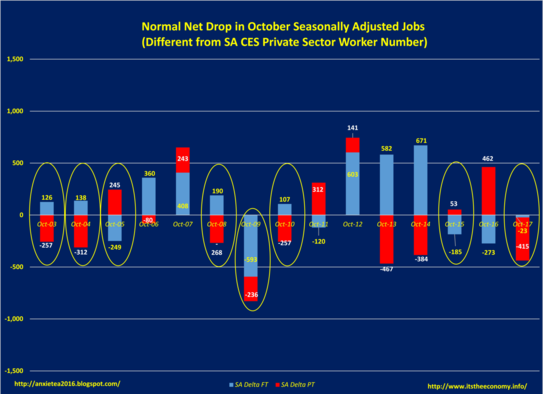 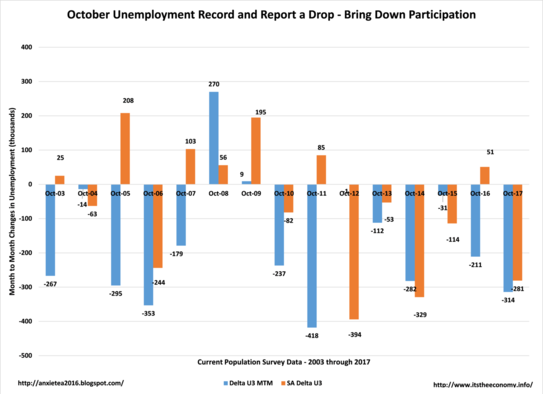