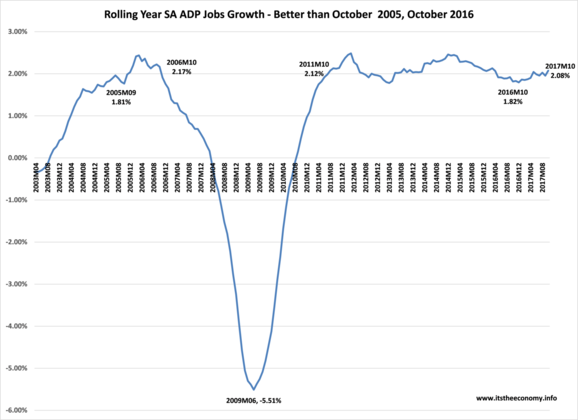 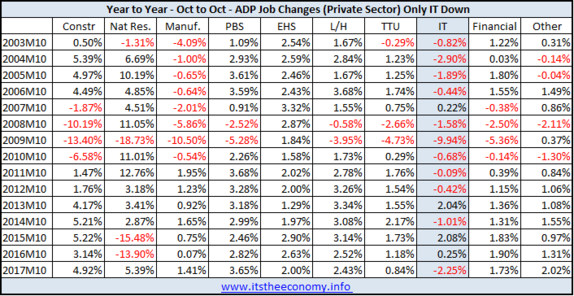 Last Month's ADP Jobs report was a head-scratcher as it reported a gain of 135,000 seasonally adjusted jobs whereas the Government Employment Situation Report reported a contraction. That report, in an of itself, was a head-scratcher as we added over 1 million part-time jobs last month. This month the ADP data from September was revised lower by nearly 26,000 seasonally adjusted jobs. This means that ADP is still reporting a gain of roughly 110,000 jobs. The largest negative revision (19,300) was in the Leisure and Hospitality Sector. Another downward revision of 17,100 jobs  hit the Education and Health Sector. The IT sector saw a downward revision of 13,000 jobs. The Trade Transportation and Utility sector saw an upward revision of 29,800 jobs.

The month to month growth was best in Construction, Professional and Business Services, Leisure and Hospitality, and Financial Jobs. The growth that we saw reported may be a "hurricane bounce." The Leisure and Hospitality sector was hit hard in the September Employment Situation report. Construction is certainly higher as we see rebuilding taking place in Texas and Florida. The IT sector continues to suffer.

Annual job growth is up for all but Information.The seasonally adjusted annual ADP job growth rate is at 2.08%. This is up from last October when it was 1.82%. This is comparable to the growth during October 2011 as the economy was pulling out of the recession and better than October 2005 as the economy was charging ahead to its pre-recession zenith. Leisure and Hospitality (L/H), one of the largest sectors, grew at 2.43 year over year. The Education and Health (EHS) Sector grew at 2.00%. The construction sector saw one of its best annual growth rates for the month of October, growing at 4.92%, Professional and Business Services (PBS) grew at an annual rate of 3.65%.

If there is a relationship between the ADP Jobs Number and the Current Employment Statistics Worker number then we should see a SA CES growth of 304,000 workers. This could reconcile with the ADP jobs number when you consider that we are expecting to see a surge in multiple job holders.  Some of these workers will be working two jobs and will be double-counted. (The value is based on multiplying the SA CES value for October 2016 by a growth rate of 1.0208 and multiplying that value by 0.994315 - the seasonal factor for 2016.) Comparing data from two different data sets with differing sample sizes and differing seasonal factors is dubious. Last month the ADP number indicated that the "jobs number" grew while the SA CES number recorded a contraction.  The jobs market is approaching the best ADP annual growth rate for the month of October. Consumer confidence is up. Retail sales are up. They are all feeding upon one another.