More than $6 Trillion in Total Retail Sales during past 12 months.

There are some people who have been saying that we are in a Retail Ice Age. This column has written many articles on the Retail Renaissance and how this year we could eclipse the $6 trillion retail sales year mark for the first time. Last year was a record retail year with over 5.75 trillion in sales. This record year of Retail Sales followed the record year of 2016, which followed the record year of 2015, which followed the record year of 2014. We had a housing recession that spurred a jobs recession that spurred a retail recession, which was finally measured in the GDP recession. The Recovery started with a Retail Renaissance, then a full-time jobs renaissance, and the on-going real estate recovery in both the new and existing home markets. This recovery in the housing market means that people want new electronics and appliances, new furniture and furnishings, new Home Building and Garden Equipment, and maybe even new cars to put in their new garages. This column examines the same month (CM) growth rate, the current year (CY) growth rate, and the rolling year growth rate. If the CY growth rate is faster than the rolling year growth rate then the economy is growing. If the  CM growth rate is greater than the CY growth rate then the economy is growing and should continue growing.  What was recorded and what was reported in the October Monthly and Annual Retail Trade Survey (MARTS) Report?

What was expected? The MARTS forecast article projected gains, non-seasonally adjusted (NSA) month to month in Non-Store Retail (NSR,) Miscellaneous Retail Sales, General Merchandise (GM) Sales, and Personal Care (HPC) sales. It was anticipated that we would see month to month drops in Motor Vehicle and Parts (MVP) Sales, Electronics and Appliance (EAS) Sales, and Sporting Goods and Hobbies and Books (SGHB) Sales. Furniture Sales could have gone either way.

Every Sector except one grew month to month. We saw eight sectors have record Octobers. The only sectors that did not have their best Octobers ever were EAS, SGHB, and Gasoline Station Sales.

Current Year Sales are up for all but one sector - Sporting Goods, Hobbies, and Books. We have already recorded 4.946 trillion dollars in retail sales. This is up from last October when we had 4.689 trillion dollars in sales, a 5.49% increase in sales. We have nearly eclipsed the total sales for 2013 during the tenth month of the year with the two strongest months yet to come.

Every Sector except two grew October to October. Only Sporting Goods, Hobbies and Books and Miscellaneous (MISC) Sales. What is going on with regarding SGHB sales? This column published an article during July regarding the massive revisions to the SGHB data. "June Retail Data - Another Record Month" detailed how the data for SGHB was systematically revised lower and the EAS data was systematically revised higher by the same amount from 1992 through 2014.  Electronics and Appliance Sales used to be headline news. There appears to be a cycle starting. Sporting Goods and Hobby sales may have peaked as people return to work.

Current Month Growth was better than Current Year Growth, and Current Year growth is better than Rolling Year Growth. The Rolling Year growth rate bounced back to 5.44% for the trailing twelve months. These growth period tend to last at least one to two years. If consumer sales make up 70% of the economy, as pundits like to say, then we could see a minimum of 3.5% growth this year during the fourth quarter. There are four components to the GDP including Personal Consumption Expenditures (PCE,) Gross Private Domestic Investments, Imports/Exports, and Government Spending. The Same month growth rate cam in at 5.87%. The CY growth rate came in at 5.50%.  The RY growth rate came it at 5.44% Can the Same month growth rate for November match that explosive rate we same during November 2017?

We are on track for our first end of the year $6 trillion dollar sales year.  This month the rolling year data eclipsed $6 trillion this month.  Same month data is surging faster than the current year data, which is surging more than the trailing year or rolling year data.  This expansion could last one or two more years, at a 5% growth rate. Retail sales growth means more jobs, more home sales, more jobs, more retail sales jobs, more revenue for local, and state government, as well as the federal government. WE are in a virtuous cycle. 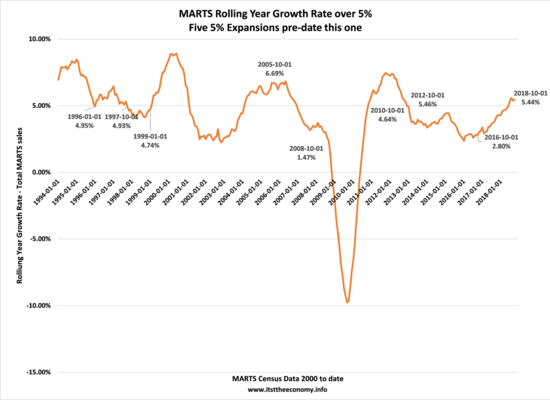 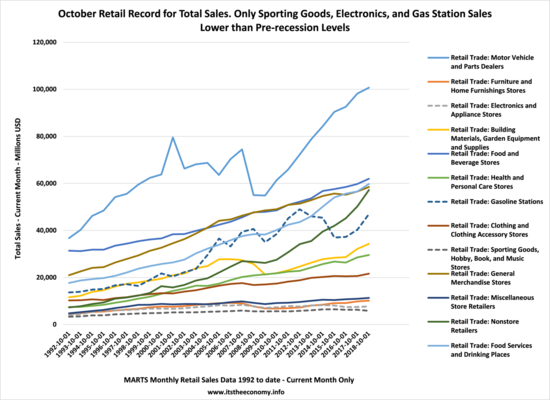 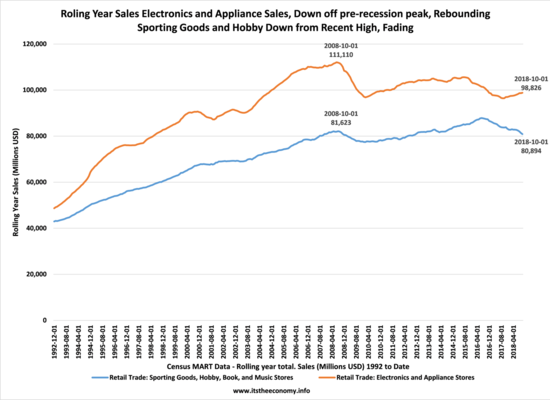 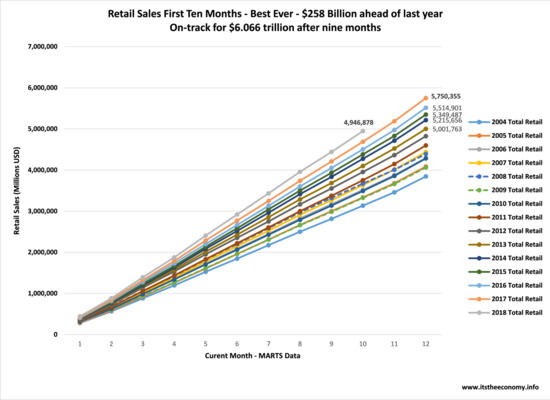