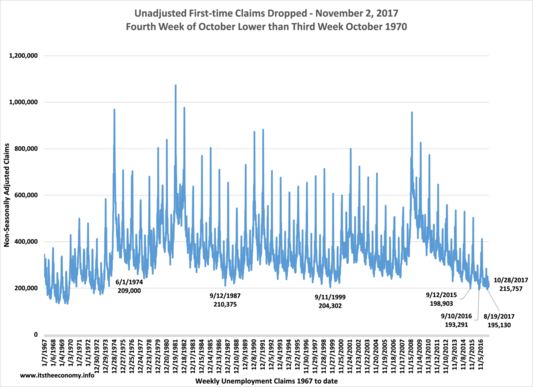 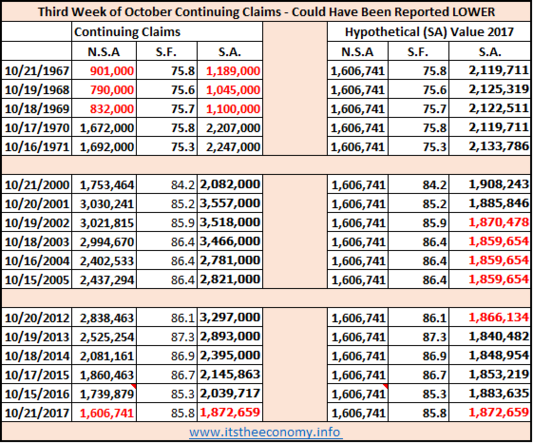 Throwback Thursday - Lower than the Same Week Data from 1970

What used to be "bottom of the eight o'clock hour headline news" is now bottom of the birdcage news. The weekly unemployment claims number that is reported is the seasonally adjusted (SA) first-time unemployment (FTU)claims data. A second unemployment claims number is the SA Continuing Claims (CC) unemployment number. The problem is that the seasonal factors that are used to convert the non-seasonally unadjusted (NSA) FTU data to the SA FTU data change from week to week, month to month, season to season, and year to year. The factors also change between the FTU and CC data sets. When data from different weeks or seasons, with different seasonal factors, are compared FACTs (False Assertions Considered to be True) are created.

The "Falsest" FACT is the Under 300,000 SA Weekly Claims Streak. This column has written a number of articles regarding the fallacy of this streak:

The truth is that we have had some of the lowest first-time unemployment claims data, and some of the lowest continuing claims data for the current week  of the current month for "months. What is failing to be factored into the discussion elsewhere is the truth that we have 84 million more people who are eligible for unemployment benefits than when the program was started during 1967. The unemployment claims data does not even list the data for the years between 1967 and 1971. We start seeing that number for the January 1971 period when there we 53,221,000 "covered insured." Currently we are approaching 140,000,000 claim eligible workers. That is the backdrop for this week's report.

Continuing Claims are lower this week than the same week during October 1970. Déjà vu. Last week's continuing claims number was revised slightly higher from 1,597,654 to 1,603,036 claims. This is a historically low level. This week the NSA CC value was recorded at 1,606,741 claims. There were fewer claims for the third week of October 2017 than there were during the third week of October 1970. Remember, continuing claims lag first-time claims data by one week.

This matters because it reinforces what we have seen for months and years. The weekly unemployment claims report is ignored by almost  everybody. Those who ignored this report when the mid-October numbers were released will be surprised when the unemployment level drops tomorrow in the U-3 section of the Current Population Survey. The question here is whether or not that we can drop to the level of continuing claims we saw during the first week of November 1988? The continuing claims peak has been falling January to January since 2009. This drop has been, in part, due to a drop in the participation rate. Unemployed workers are considered participants. This drop in continuing claims is, in part, due to the reliance on part-time workers or seasonal workers instead of full-time or full-time non-seasonal workers. We have seen a huge surge in full-time workers. The "Jobs Iceberg" is melting. Unemployed workers are finding employment.

We saw phenomenal unemployment claims data released. The real under 300,000 seasonally adjusted first-time claims streak began sometime and ended sometime depending on the seasonal factors you use. The revisions to the data mean that the streak ended during November of 2016. Unemployment is down. Participation should be recorded higher tomorrow. Watch this column for the Jobs Report series of articles, starting tomorrow. 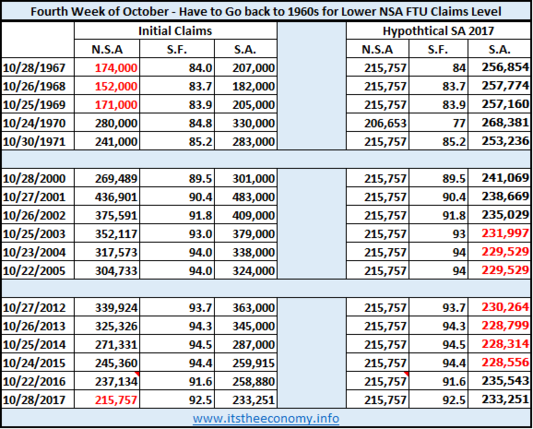 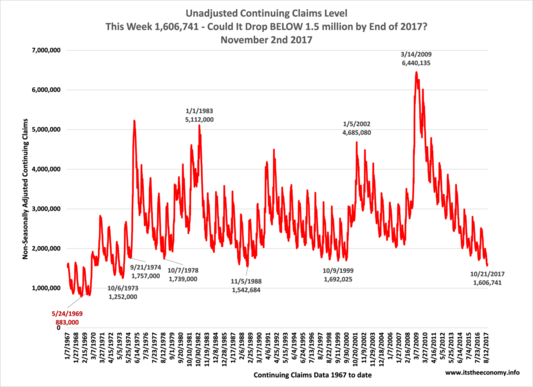