This is Jobs Week. This Wednesday we receive the ADP Payroll Report, Thursday we receive the Weekly Unemployment Claims Report, and Friday we receive the Jobs Report, also known as the the Employment Situation Report.  The ADP report measures private sector payroll and produces only a seasonally adjusted data set. The headline "Jobs" number is the Current Employment Survey (CES) worker data. The CES data is reported in two forms: the non-farm payroll (NFP) data, which includes government sector workers, and the total private sector worker number, which excludes the government sector jobs, local, state, and federal. A problem with projecting the  ADP data is that all of the data that is published is seasonally adjusted (SA.) The CES data comes in both the SA and non-seasonally adjusted (NSA) formats. The seasonal factors used to convert the NSA data to the SA data change by data set, category, month, and year.A second problem is that the ADP data underwent a massive revision this past February after the January revision of the CES data. The January Revision to the NSA CES data shifted worker growth from 2018 back to 2016 and 2017. The February ADP revisions were even more substantial. A growing payroll trend was revised from a quickly growing economy to a slower growing economy. There are a number of ways to project the growth for this month. What should we expect?

The Rolling Year growth is looking for nearly 2.00% annual growth. The rolling year growth compares where we are with where we were the same month twelve months ago. We have seen September grow at a faster rate than August five of the past eight years. We are currently growing faster than we did during August of 2017 and are approaching the revised value for August 2016. We had been growing at over 2.00% prior to the revisions. If we grow at the same rate as we did during September 2016 (current Value) then we could see 146,000 workers added. If we grow at 1.94%, low by historic standards, that number becomes 201,000 workers. If we grow at 1.98% that number stretches to 251,000.

We should see growth in all sectors month to month with two possible exceptions. The two big question marks are will we see growth in Natural Resources and will we see growth in the Information sector? It is possible, not probable, that we could see a contraction in Leisure and Hospitality. The largest growth values, by percentage, are for Construction, Manufacturing, and Financial Services. 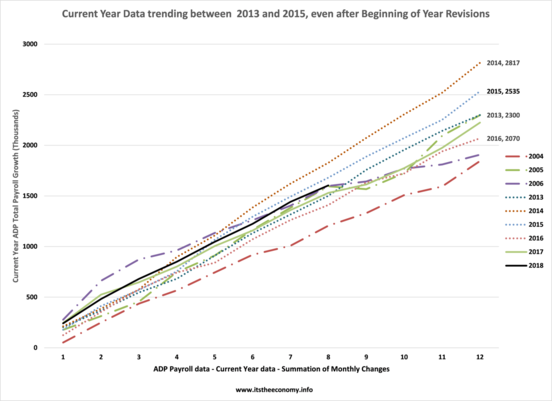 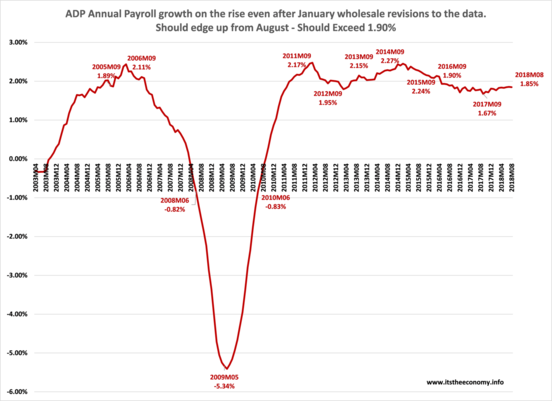 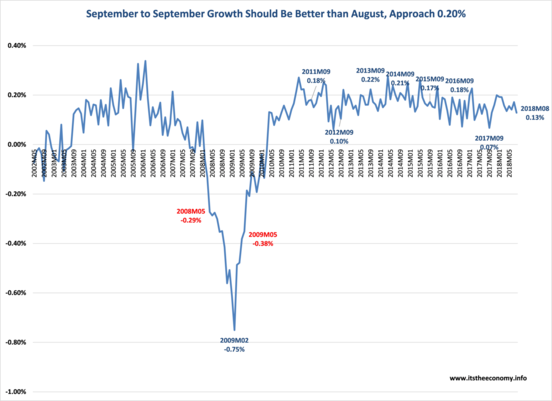