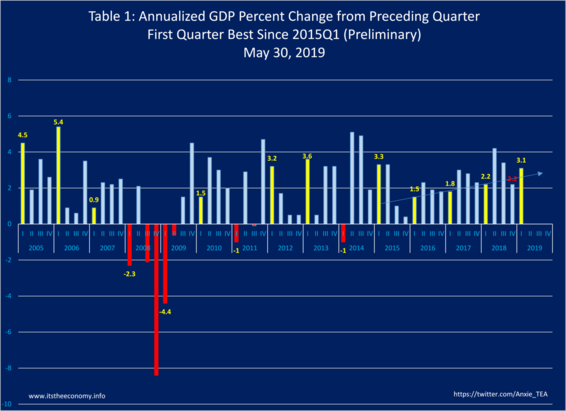 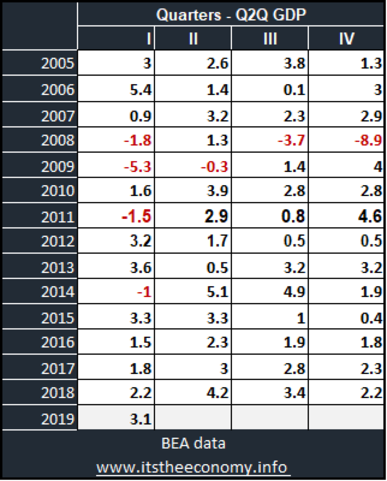 All of the data from First Quarter Were Revised - Now 3.1% Growth

None of the data from Fourth Quarter were revised

There are three bites at the GDP apple: The Advance value, the preliminary value and the final value. The "final" value is never final because there is an annual revision to the prior years, plural, data every July. This year is no different.

Still Firing on all cylinders quarter to quarter. GDP revised from 3.2% to 3.1%. Remember that the Government Shutdown was supposed to trim 1% from the first quarter annualized GDP level. There were even some projecting 0.5% growth.

Somehow, even with three of the four components being revised higher, Gross Private Domestic Investment (GPDI) being revised down 0.8% reduced the GDP by 0.1%. GPDI was originally contributing 0.92% of the 3.2%  GDP it was only 0.91% of the 3.1% for the preliminary value.

Watch the revisions that will hit with the release of the 2019Q2 data. The current GDP report provided this disclosure"

The revisions will drive the narrative.

This was a better report than was reported. The economy was growing faster than the experts projected. The 5.1% growth that we saw during 2014Q2 was a bounce off a -1.0%first quarter. This year we could see a 4.2% or 4.5% growth off of a 3.1% quarter. This is significant.