Last week this column produced a new home construction and a new home sales forecast. This week an existing home sales forecast was published. We are still in recovery mode from the Housing Recession, both an existing home sales recession and a new home sales recession. While the sales prices have rebounded, the number of new and existing homes sold are still below where we were during 2002-2006. Last Year 5.511 million units were sold. The January Existing Home Sales originally reported 313,000 units sold, down from 319,000 during January of 2017. This sounds disappointing.  It might be unless you recognize that the average sales price was a record high sales price for the month of January, while simultaneously recording a record low existing home inventory, dating back to 1999. The existing home forecast article  published the possibility of a new record high average sales price of between $282,000 and $287,000. The same article also published a potential level of sales of 316,000 to 324,000 units. A caveat was issued saying that we cannot sell what isn't on the market. If inventory fell last month then that could drag down the sales level.

The Average Sales Price Popped Higher to $281,200. This is still a record sales level even if it did not jump as much as projected by this website. The data can be broken down between single family homes and condo/co-op sales. Sales for Co-ops and Condominiums were down from last February and up from January. The same can be said regarding inventory. Single Family sales rose month to month and February to February. Inventory was up from last month and down from last February. The lower average sales price of $275,700 for condominiums and co-ops brought down the average sales price for housing overall. The average sales price for single family homes was $281,900.

The Number of Units Sold was the best February since 2007. The units sold, non-seasonally adjusted hit 319,000. This is pretty much right in the middle of the projected rain of sales. Existing home sales jumped from 277,000 last February to 283,000 this February.

Inventory shows Weakness and Signs of Improvement. Inventory is of the historic low of January and is still lower than any February since 1999. We normally have roughly 2 million or more units of single family homes and condominiums/co-ops  any month of the year and peak at 2.5 million combined units during the Summer months. We had excessive inventory between 2006 and 2012.We had strong sales during 2005 and 2006 with fewer than 3 million units for sale.

The Current Year data does not reveal much insight. We have virtually an identical amount of units sold as we sold during January and February of last year. We have sold more combined units than we did during 1999, 2000, and 2001 through February. We have also sold more units than during 2008 through 2016. We will need to see the data that comes in between now and the end of June to have a better handle on how much the lack of inventory is dragging down sales..

The Realtors are projecting an annual rate of sales of 5.540 million units. This is better than last February's 5.480 million units. They are projecting a better year for existing homes and weaker year for condominium sales. We have had 72 consecutive months of rising prices, according to the Realtors. This is good news because if people who bough homes within the past six year need to move they can probably move and make a profit. All real estate is local. Contact a Realtor to find out what is happening in your community, your school district, your neighborhood or your condominium association.  Best data since 2008? Crickets. 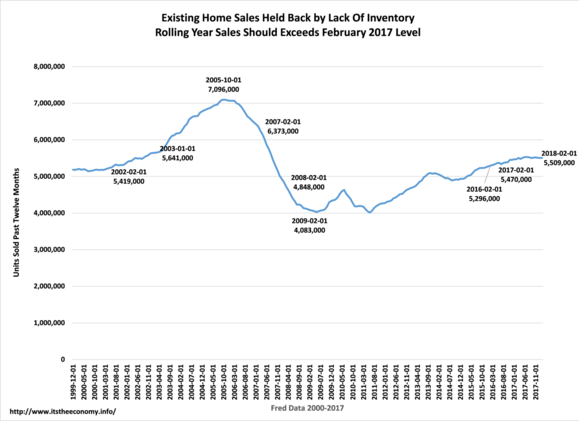 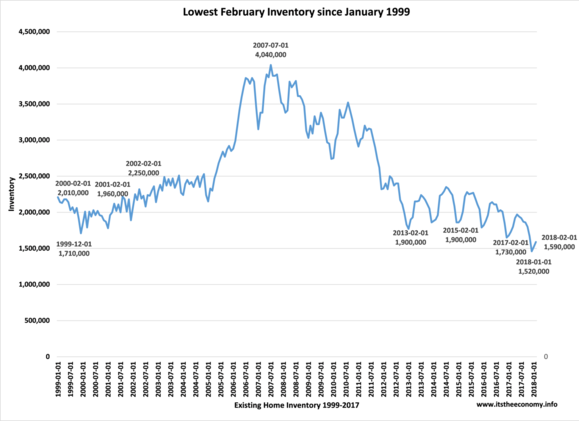 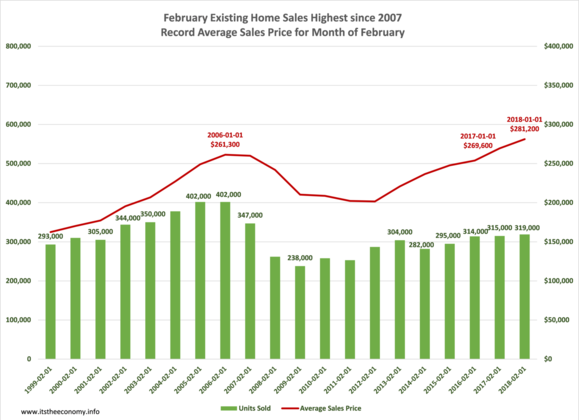