The February Jobs Report was released Before Coronavirus (BC)

It was great for Men, Women, and Multiple Job Workers

The first two job reports of 2020 have been very strong. Full-time jobs were up, unemployment was down, all sectors were looking great. The Wuhan Virus, COVID-19 Wuhan Flu, or "the coronavirus," have changed everyone's thinking regarding the next few months. The good news is that February was definitely BC. The March Current Population Survey (CPS) data for Jobs and the Current Employment Statistics (CES) Workers and wages data was collected close to March 12th. Most of the "self-quarantine action" happened around St. Patrick's Day. Where were we this February?

We had a record level of February Men Working this February. The growth in jobs since the Great Recession has been a recovery of 10.8 million lost full-time jobs along with the addition of 971,000 more full-time jobs. Some people in the media confuse "recovery" with "expansion." The former administration liked to discuss jobs created after they hit bottom during January of 2010. The problem is that when they left office there were fewer full-time jobs during January 2017 than we had during July 2007. Men lost the majority of the jobs. Men are now working 2.467 million more part-time jobs than they were during the Summer of 2007.Men were participating at 72.40% with an unemployment rate of 5.72% during February of 2008. Those numbers are now 68.96% and 4.10%. Their effective unemployment rate is an underappreciated 8.65%.

Men and women are working a record level of February Multiple Jobs. This column has written a number of times that he best form of unemployment insurance is a second job. That may not have been true during this once in a lifetime layoff. Prior to the "forced closing" of the economy:

Record February for people working a primary FT job and a secondary PT job. The other component, the primary PT secondary FT worker was not as high as it was during February of 1998, 1999, or 2000, so the combined level of FT and PT job workers was not a record.

February was a record month, BC, before coronavirus. We had a record level of February FT jobs. We had a record February for Men working and Women working. We had a February record for multiple job workers.  We may have one more jobs report BC before we enter into the CE, Coronavirus Era. We may skip from BC directly to AD, After Disease or After Disruption. Some sectors are ramping up production while others are shutting down. If this lingers then some of the people who were working in one industry prior to the disruption may be working a different sector during and after the disruption. 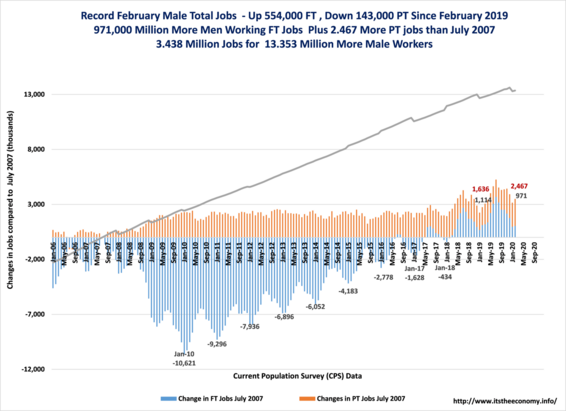 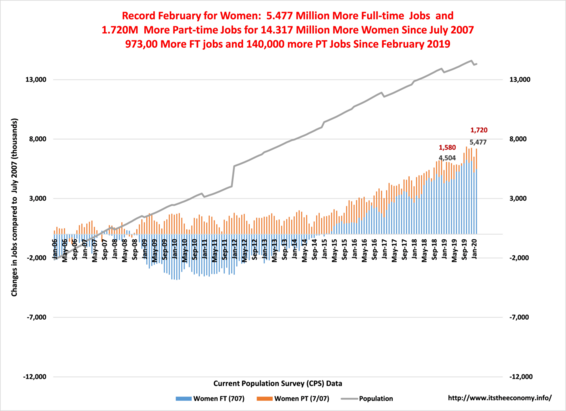 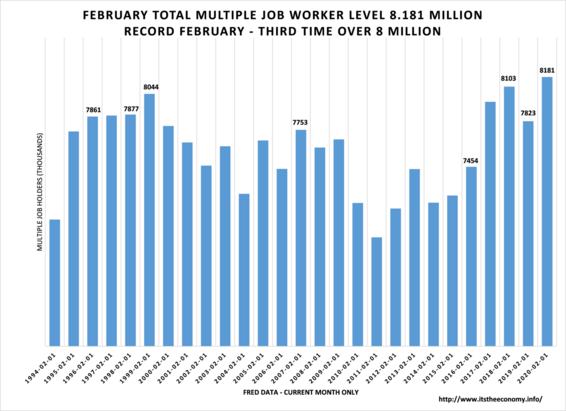