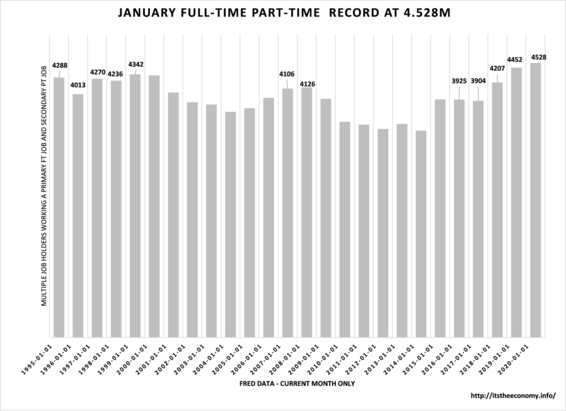 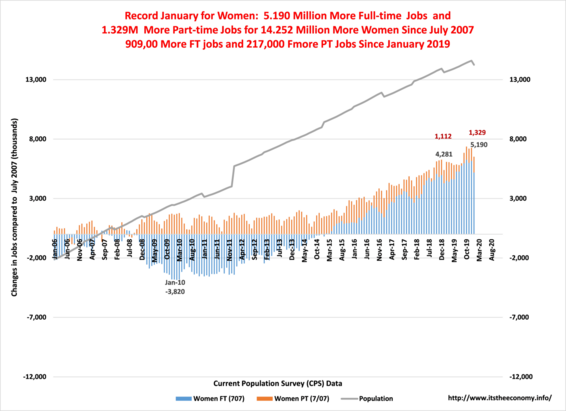 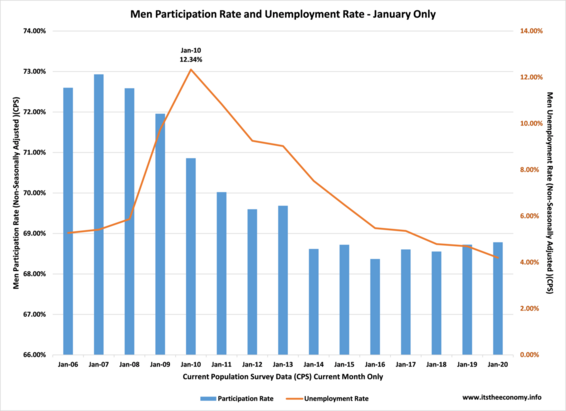 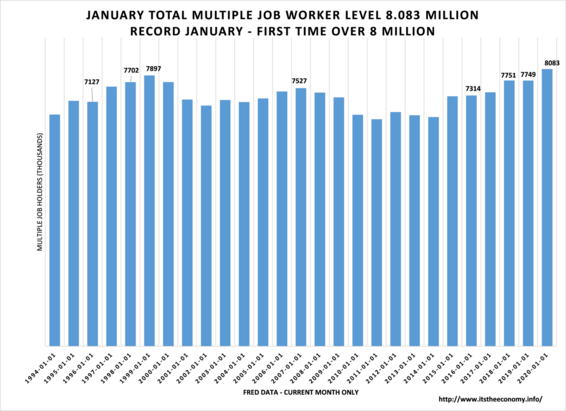 The CPS data was Strong for Men, Women, and Multiple Job Workers

The data was quite remarkable. The headline Seasonally Adjusted CES worker data was up 206,000 private sector workers and 225,000 seasonally adjusted non-farm payroll positions. Unemployment, part of the CPS data set, was at it's lowest unemployment rate since January 1967. This was covered in "Jan. Jobs Report: Revisions and Remarkable Data." Seasonally adjusted workers were up in ten out of eleven sectors month to month. They were also up in tens sectors January to January. Every sector received a pay raise last year, January to January. This was covered in "Record January Wages and Worker Data." The thing is that the CES data is only half the story. The Current Population Survey (CPS) data and the CES data were out of sync last year. What happened this month? The data for CPS jobs was at an all-time high, so it is no surprise that President Trump is outperforming on Jobs creation compared to former Presidents Reagan Clinton, George W, Bush and Obama. This was covered in "Five Presidents at 36 Months: Momentum."

Men and Women are Climbing the Jobs Mountain. This column, and its sister site "Reclaiming Common Sense," have been publishing articles regarding the "Jobs Iceberg" and the "Jobs Mountain" during the past six years. It was obvious from the data that full-time jobs were down and part-time jobs were up from their pre-recession highs during the 2011 and 2012 time-frame. The two websites were discussing the Jobs Iceberg until February 2017. There were fewer full-time jobs during all of 2008, 2009, and until 2016, than we had during July 2007. This created the "iceberg" because there were more part-time jobs on top of the iceberg, and more "negative" full-time jobs, under the waterline. The same phenomenon was found when comparing jobs creation for men and women during the same periods of time.

Another way to look at the CPS jobs data is the multiple job worker data. The government keeps track of the number of people working two full-time jobs (FT FT,) two part-time jobs (PT PT) and a primary FT job and a second PT job (FT PT.) They also keep track of the "variable hour workers." When these four categories are summed they do not equal the total MJH level that is published. This column uses a PT FT number to make the math work.

A second job is the best form of unemployment insurance. There have been some "concerns" among "experts" that the seasonally adjusted continuing claims level is slightly higher than it was last year during the same week of the year. This past week we had the lowest Insured Unemployment Rate for the second week of January. We had the lowest first-time claims issuance rate for the third week of January. We have record levels of "covered insured." There are more than 2.179 million more covered insured this February than last February, so an additional 6,955 covered insured this February than last February could be a weekly adjustment. When you lose your first job, even if it is a full-time jobs, you are not eligible for first-time claims benefits.

We have more men working in the workforce this January than any previous January.. We have more women working in the January workforce. Men and women are participating more while being "less unemployed"this January.  We have January record for people working multiple jobs, FT PT jobs, dual PT PT jobs, and an elevated level of people working dual FT jobs. This should keep the first-time claims level near historic lows, and this should keep continuing claims level neat generational lows, which should mean that the CPS U-3 level should remain at our near multi-generational levels. 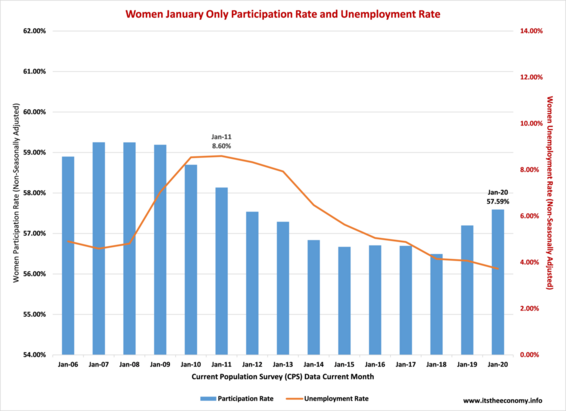 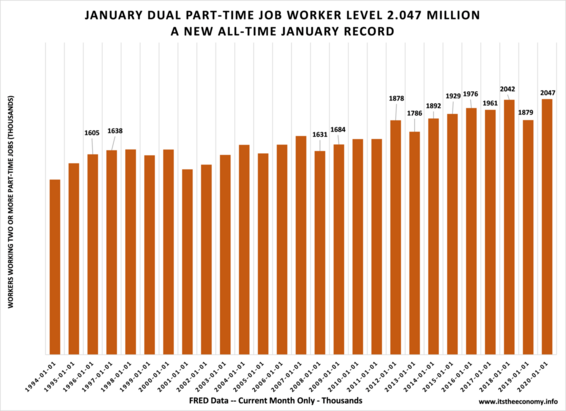 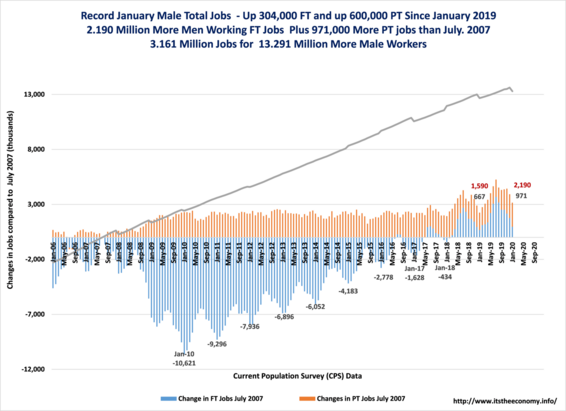