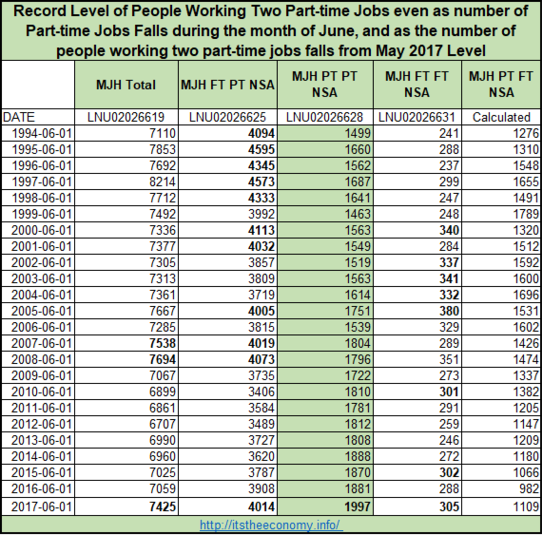 The June Jobs Report was better than most analysts expected. It came in right on target with what was projected in this column. The article "Jumping June Jobs Report Potential" saw the potential for a growth rate of 0.83% to 0.89%. The article "Full-time Jobs JUMP"  detailed how the upward revision to the May data brought down the growth rate from 0.84% to 0.81%, how we saw the most June full-time jobs added since June 2006, and how we saw the number of part-time jobs lost was lower than June 2016. We normally add full-time time jobs and lose part-time jobs during June, so this was not a surprise.

Working more than One job? You aren't alone. One of the under-reported stories of the past year has been the changes in the number of people working two or more jobs. Some people are working two full-time jobs. Some people are working two part-time jobs. There is a considerable number of people working either a primary full-time jobs and secondary part-time job or a primary part-time job and secondary full-time job. The Affordable Care Act changed the definition of full-time work to 30 hours or more a week. The idea was that people who worked 30-35 hours a week without benefits prior to the passage of ACA would be able to work less and receive better benefits. The hypothetical worker Julia would be doing better and working less hours.

The recent influx of multiple job workers has kept some potential workers on the sideline. It appears that you have to have a job in order to find a job. The influx of multiple job workers also has brought down weekly claims numbers. If you lose one job, even a full-time job with benefits, you still have another job if you are working multiple jobs. There is no "lesser employment" benefit package.The "Five Presidents at Five Months" article indicated that we are seeing an increasing number of of full-time workers, a decreasing number of part-time workers, and a decrease in the number of unemployed workers during the first five months of the Trump Presidency. The job report has an overabundance of data that can illuminate where we are and where we may be heading.