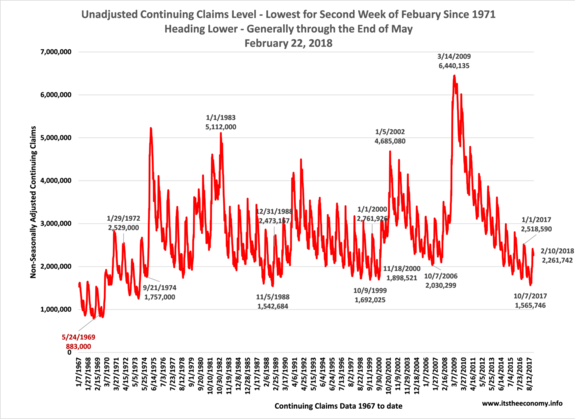 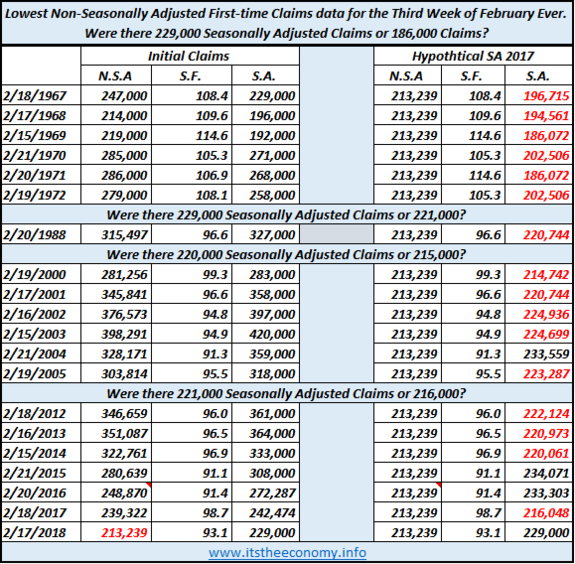 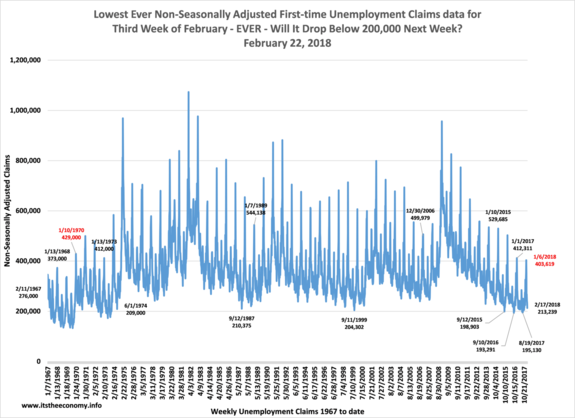 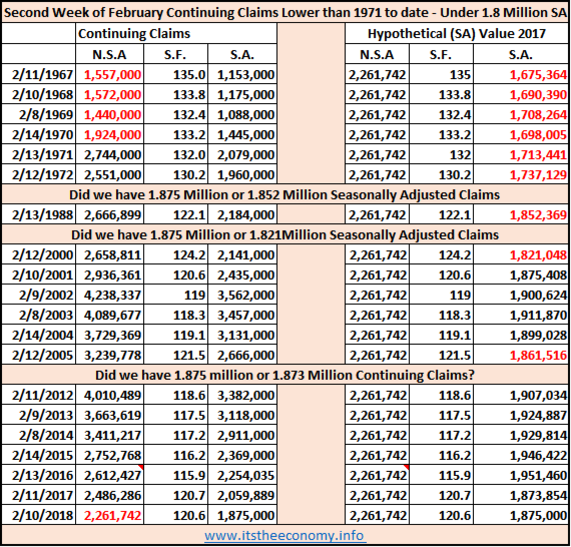 The Weekly Unemployment Claims Data is Being Ignored, Again

The weekly unemployment claims data was released at 8:30 AM this Thursday morning. It was generally ignored. The data that is recorded is the non-seasonally adjusted (NSA) first-time unemployment (FTU) claims data and the NSA continuing claims (CC) data. What is normally reported is just the seasonally adjusted (SA) FTU claims data. A problem is that the data that is being released is "too good." Another problem is that the weekly unemployment claims streak that "started" under President Obama (A False Assertion Considered to be True or FACT) has worn out its welcome. This is sad because it ended and restarted during November of 2016. A third problem is that the the seasonal factors change between categories and from week to week, month, to month, and year to year. This means that the authors of the report can create these FACTs. A fourth problem is that the seasonal factors change from week to week, month to month, and year to year. These factors used to be published regularly. They are published now, the problem is that they cannot be accessed using Mozilla - my preferred browser. They used to publish and archive of press releases. They still do - just not for the Obama administration or the Trump Administration. So what was recorded this week and what was reported?

The Continuing Claims data was "reported" at 1.875 million - It could have been reported under 1.7 Million. The SA CC value is rarely referenced in the mainstream media. The problem is that the 2 million claims level sounds daunting. Compared to the 6.44 million unemployment claims at the depths of the recession, this is minor. The trend is our friend and it is heading lower. How low can this value fall? It is difficult to say. It may be easier to calculate once the seasonal factors for the rest of the year are published. the lowest since this week 1971? Nah, not important to most people. Lowest during the past 47 years? Different Spin?

Seasonally adjust this. This article has lamented the use of seasonally adjusted data for economic new reports for years.The one data source, the one report, that publishes the seasonal factors in advance is the unemployment claims report. The source of the data moved and was inaccessible from the Firefox browser I use. I have had to use Internet Explorer to download data from the Current Population Survey and Current Employment Statistics data sources. This is not open nor transparent. The data for the economy is great. Jobs are up. Full-time jobs are up. Unemployment is down. Retail spending is up. The "biggest" problem is workforce participation. Unemployed workers are participants. Full-time jobs weigh the same amount as part-time jobs in the participation rate calculation. The components for the reported participation rate are all seasonally adjusted. These individual seasonal factors change month to month, year to year. These seasonal factors are not published. The seasonally adjusted U-3 unemployment rate data will be collected, was collected, during the time-frame of this unemployment claims report. This means that we should see the lowest unemployment rate since 2000 for the month of February recorded and potentially reported when the February Jobs Report is released next month.