We received a strong Jobs Report this Friday, in case you didn't hear about it, or the stock upward push in the stock markets, plural, after the report was released.

This column has been writing on the "War on (Wo)Men over the past few years. Women lost fewer jobs than men during the Great Recession. Women recovered faster and have added more total jobs since the recession. There are more potential female workers than male workers, How arr.e men and women doing this October?

There are a record number of women working this October. The peak level of Pre-Recession Jobs were recorded, non-seasonally adjusted, during July 2007. Women lost 3.8 million full-time jobs between July 2007 and January 2010. They had fully recovered those lost jobs by February 2015. Women have since added 6.268 million FT jobs and another 1.108 million PT jobs through October of this year. This is an increase of 1.201 million FT jobs and 48,000 PT jobs over the past year.

There are an record number of October Men in the workforce. We normally hit "peak men in jobs" during July. Men lost 10.6 million full-time jobs between July 2007 and January 2010. Men did not recover all of their lost jobs until the Summer of 2016. Then they lost those jobs. They recovered them during 2017 before losing them again during January 2018. Men now have 2.5 million more FT jobs and 1.9 million more PT jobs than they had during July 2007. That is nearly 2 million jobs for 13.4 million more potential workers, Women, by comparison, have added 7.4 million jobs for 14.4 million more potential women workers.

Jobs are up more than unemployment is down for men. there were 2.2 million unemployment men last October compared to 1.9 million this October. It took ten years to fall from 74.34% during July 2008 to 69.85% during July 2018. It will take a comparable period of time to fully recover.

We came close to a record level of October workers who were working multiple jobs. There were 8.351 million multiple job workers compared to 8.369 million during October of 1996. We had the second most number of FT PT job workers this October at 4.602 million. We had the second most PT PT job workers at 2.172 million. We set an October record of 377,000 people working two FT jobs. The balance worked "variable hours" or worked a Primary PT jobs and a secondary FT job. The graphics can be found here.

You would think that an October record level of Men in the workforce or an all-time record of women in the workforce would be newsworthy. There are some commenting on the record low women unemployment rate. Very few people discuss the multiple job worker data. We still need millions of jobs to meet the needs of the growing workforce population. Full-time jobs are increasing for both men and women. Men and women are participating at a higher rate than they have in years. 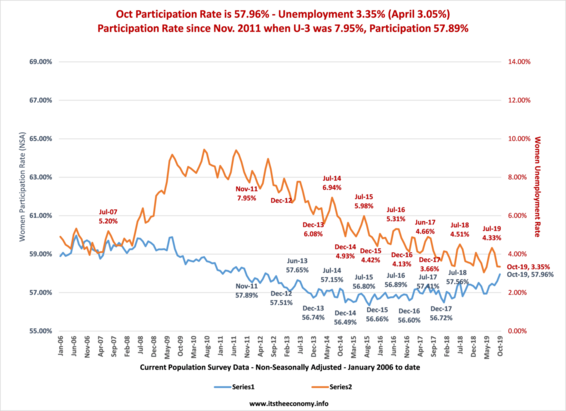 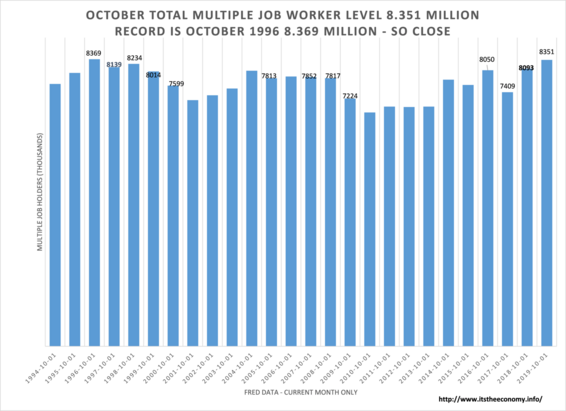 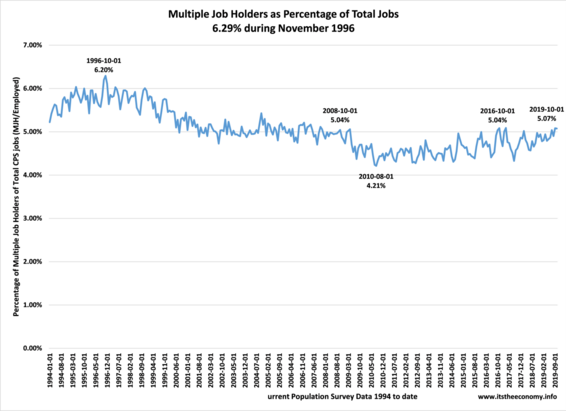 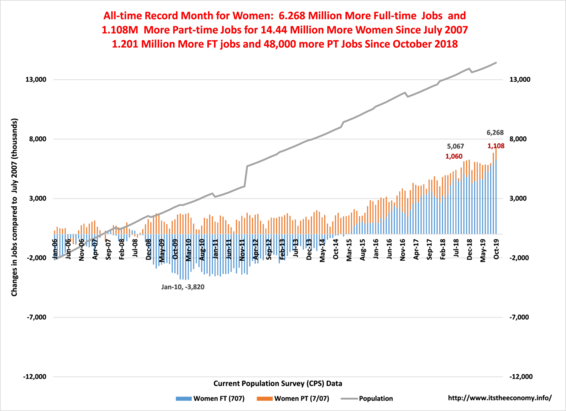 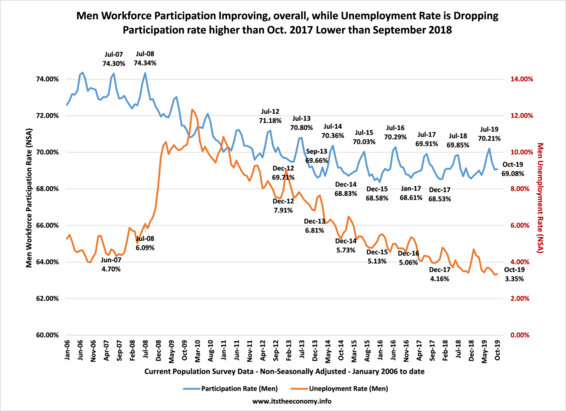 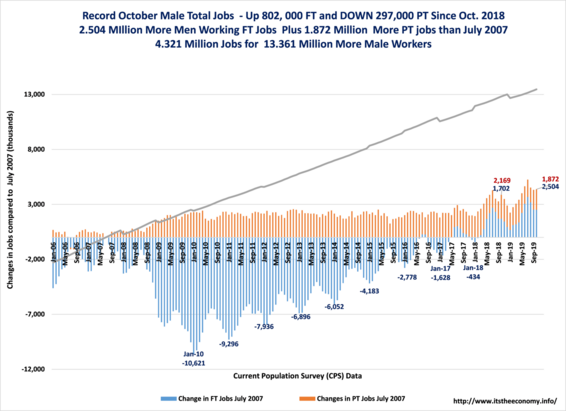