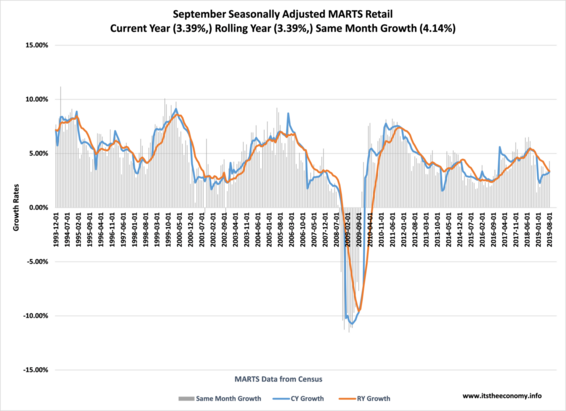 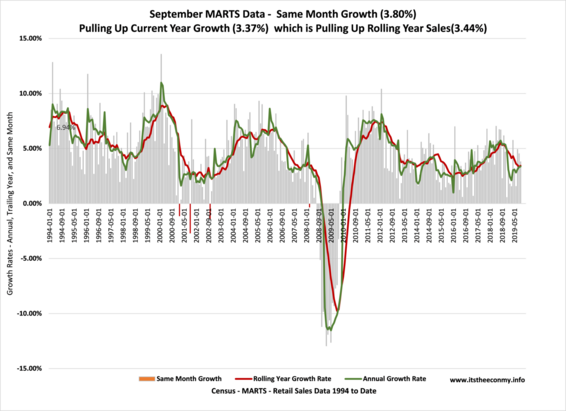 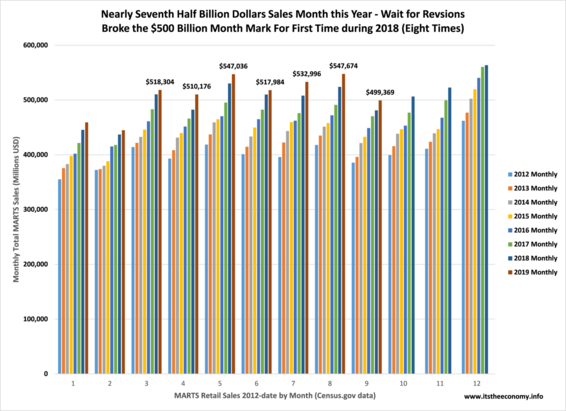 A Record September Total Sales level of $499.4 billion was recorded this month. All sectors were expected to record  month to month declines non-seasonally adjusted. The largest drops by percentage in Motor Vehicles and Parts (MVP,) Furniture and Furnishings (FHF,) Electronics and Appliances (EAS,) Health and Personal Care (HPC,) and Clothing and Clothing Accessories (CAC.) The largest September to September growth rates should be recorded in Non-Store Retail (NSR,) Food and Drinking Places (FDP,) Gas Station Sales (GASS,) Food and Beverage Stores (FBS,) and Clothing (CAC.) We could see decreases from last September's levels for Building Material and Garden Equipment (BMGE, Sporting Goods, Hobbies, Books, and Music (SGHBM,) and Electronics and Appliance (EAS) sales. All sectors did drop month to month. The Largest drops were in MVP, FBS, GASS, CAC, and SGHBM. No mention of the gasoline stimulus this year. We "saved" 1.2 billion in gasoline spending compared to September 2018.

We had our ninth consecutive month of $500 billion in retail sales. The Seasonally Adjusted data was expected to increase month to month and September to September. The largest growth rates were expected month to month in   NSR, FBS, FHF, and CAC. MVP, FBS, FHF, and CAC. The largest September to September growth was expected in MVP, NSR, GASS, FDP and FBS.  We saw $525 billion in total retail sales. Month to month sales contracted in MVP, BME, FBS, GASS, and SGHBM, as well as General Merchandise. Only EAS sales dropped seasonally adjusted from its September 2018 Level.

The seasonally adjusted data bodes well for the third quarter GDP. The rolling year growth hit 3.39% this month, as did the Current Year sales growth. The Same Month growth was 4.14%. This followed July same month growth of 3.53% and August same month growth of 4.30%. This means that the quarter grew at a seasonally adjusted 3.99%. This should "guarantee" a strong same quarter Gross Domestic Product number. The quarter to quarter data is not quite that strong, and yet it was strong than five of the past six quarters.

This should mean that we will see something stronger than 2018Q3. New Home Construction and New Home sales are on track for their best years since 2007. That will impact Gross Private Domestic Investments. Congress has been spending more money this year than last year. That should boost the Government Consumption Expenditure part of Gross Domestic Product.

We are in a Retail Renaissance. Sales are shifting to non-store retail (NSR) more and more every year. We are also seeing a fundamental shift to ordering on-line and picking up the orders at the stores. We almost had a record September of over $500 billion non-seasonally adjusted. It may still happen after the revisions are reported next month.  We reported the over $525 billion seasonally adjusted retail sales, as projected. There was a pause in growth this Summer. It is "un-paused." We should have our first ever %600 billion sales month this December. 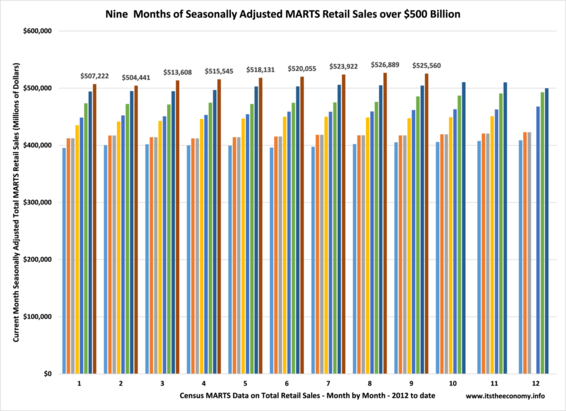