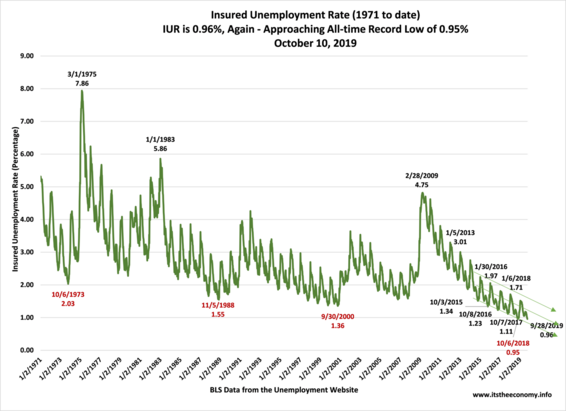 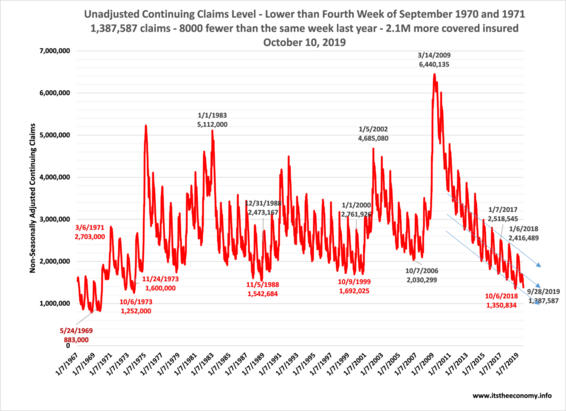 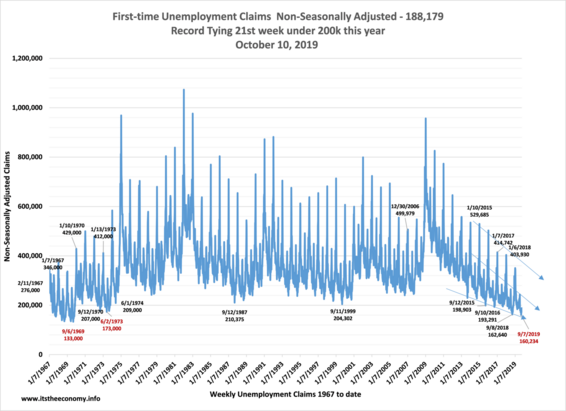 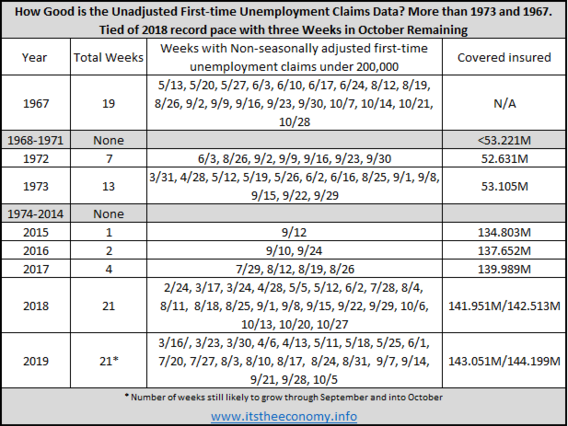 If a Record is Set and Nobody Observes it Did it Really Happen?

Twenty-first Week this Year with Unemployment Claims Under 200,000

It used to be good when we had a seasonally adjusted (SA) FTU under 300,000 claims. Now they are talking about the number of week under 250,000 seasonally adjusted (SA) First-time Unemployment (FTU) claims. Another component to recognize is the Continuing Claims (CC) level. It was thought that 2 million SA CC was considered good. We have been under 1.5 million Non-seasonally adjusted (NSA) CC and have been pointing to a level under 1.35 million claims by the first week of October. The "most ignored" data point is the Insured Unemployment Rate, which was 0.96% NSA last week.  What happened this week?

The headline seasonally adjusted (SA) FTU number was reported as dropping to 210,000. Up was down.   There has been a considerable amount of noise made regarding the "Seasonally Adjusted First-time Unemployment Claims Streak" during former President Obama's tenure. The "streak" is aneconomic urban legend. Supposedly it started March 17, 2015 and has been continuing unabated since that time. It ended many time. The most recent time is should have been reported as ending was November of 2016.

The NSA Continuing Claims (CC) level was slightly higher at 1.387 million. This was a possibility, not a probability. Are people taking longer to find the "right" job because there are so many job openings? Was this a one week event? Next week, the first week of October, is normally the annual low for continuing claims. This week we were lower than we were the fourth week of September during 2018.  We have been under 2.0 million SA CC since April 1, 2017. Where is the news?

The SA CC level was reported as increasing by 29,000 claims even though the non-seasonally adjusted data only rose 4,000 claims. The SA CC value rose from 1.383 million to 1.387M while the SA CC rose from 1.655 million to 1.684M. The SA CC was lower than the same week last year and reported as increasing over last year's level. We have fewer claims this year than last year and 2.2 million more covered insured. The SA CC should have been reported lower than it was. A value of 1.649M to 1.655 million would have been more appropriate.

How low can these values fall? It was during 2015 that there was a minor uptick in the NSA FTU level before the traditional low week of the year.  The following week the data continued its drop.  There will be variations from year to year based on how the calendar falls and what the hurricane season is like that year. We just have to watch the peaks and the troughs. Eventually the NSA FTU level and the NSA CC level may be higher than it was the prior year simply due to record levels of workers being covered by unemployment insurance benefits. We have had nineteen weeks with the NSA level under 200,000 only during 1967 and 2018, and now 2019. We have only had 20 weeks of sub-200,000 claims once, last year. The IUR will give us some insight. It the NSA IUR  increases same week, year over year, for a few weeks or months then there may be a change afoot.

This was a remarkable report. We tied one record and almost tied another record. Will we set two new records next week?