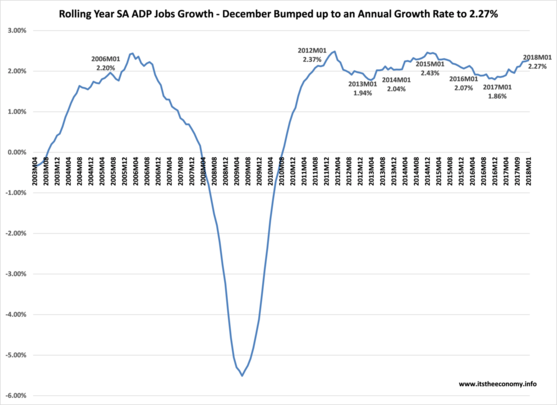 The ADP Payroll report often tells us which way the wind is blowing in advance of the monthly Employment Situation Report. The ADP report is often different from the "Jobs" report number, in part because it measures JOBS and the headline Seasonally Adjusted  Current Employment Statistic (CES) jobs number measures WORKERS. The ADP forecast article "Jan. ADP Picture is Cloudy" commented on how the annual data could point to some sectors seeing improvement while others could have seen serious drops in jobs, multiple sectors. The monthly change data saw the possibility for growth in every sector, except information technology. This column is always interested in the seasonal factors used to covert the recorded data to the reported data. This column is always interest in the adjustments to the prior data.

The November and December Data were revised higher, which took some of the luster off of this report. If last month we had 250,000 ADP jobs added and this month we had 254,000 jobs added and last month's data is revised up to 270,000 then this month we "only added" 234,000 jobs. This isn't quite what happened. The data from November was revised up 20,000 and the December data was revised up 12,000. The upward revision to the November data reduced the bounce from November to December, and the December revisions reduced the bump up from December to January. The 20,000 revision was spread out over 2 months. Without the prior revisions this report would have come in at 254,000.

The Unsung Story is the continuing strengthening in Four Sectors. Professional Business Services, Leisure and Hospitality, Trade, Transportation and Utilities, and "Other Services" continued to lead the way in growth rates, month to month. Education and Health Services also popped up this month. Construction, Manufacturing, and Natural Resources all grew.

Is a 300,000 Headline Number within reach? If we see the Current Employment Situation Annual Growth rate pop then we could see growth of well over 266,000 Seasonally Adjusted workers. A growth of 1.77% could generate a number of roughly 310,000 workers. A number of 1.87% would be comparable to 2013 and would potentially yield a number well over 400,000. It all depends on the seasonal factors used. A lower seasonal factor than projected who drop the SA CES value. Upward revisions to the prior data would reduce the bump this month. Both could happen.

Last night was the State of the Union. It was an awesome speech. The stories of the people in attendance was moving. The economy is growing. Unemployment is down for African Americans and "Hispanics." Women are seeing their best employment rates ever. Wages are starting to improve. The media is being distracted by the speech, the Democrat responses, plural, and the "Americans are Dreamers, too" reference. Jobs are key to the continuing improvement in the economy. Construction jobs are up. More jobs mean more homes will be coming onto the market. New home sales beget other jobs. This was a solid, solid, solid report. It was remarkable. We need more people to discuss this report.