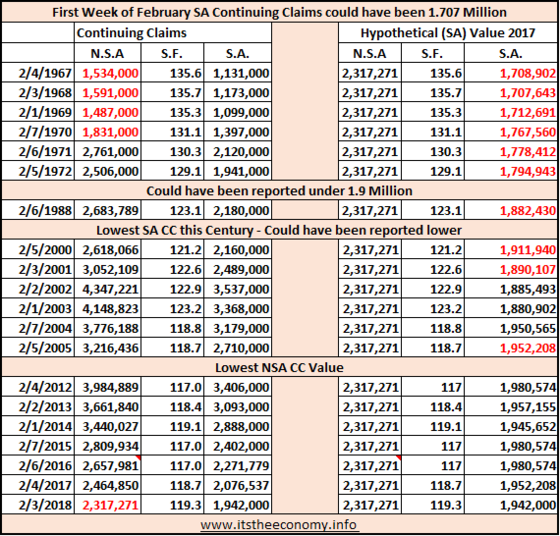 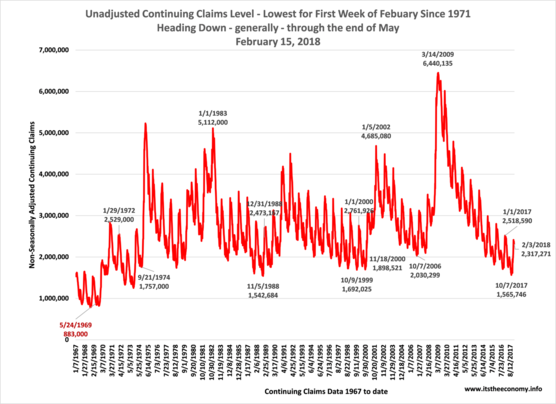 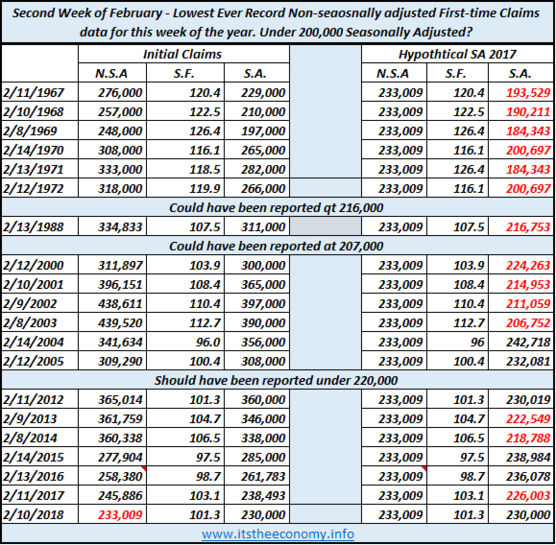 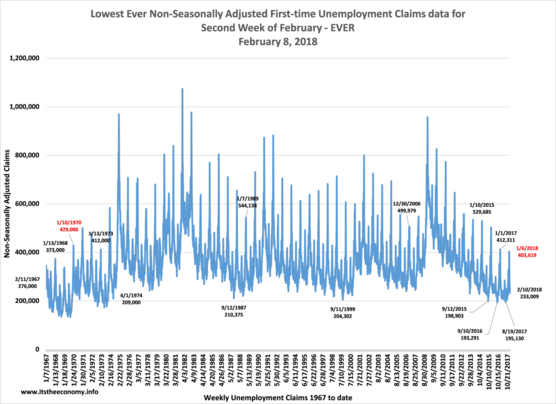 The rest of the people who cover economic data either actively ignore this data of report it as an oddity. There used to be a time when the unemployment report data was breaking news at he bottom of the hour on the Thursday that it was released. If you still read the paper it is probably found as an in-column, below the fold mention. Some sources are reporting it as the lowest level in forty plus years - they are relying on the government data and ignoring the seasonal factors.

What does this have to do with you, the reader? The economic data can help explain what you are seeing in the real world, not in Governmentland. Yesterday we received inflation data that was "higher than expected." It was also lower than January 2017. The data reflected commodity deflation and service inflation. Yesterday we also received the January Retail Sales Report. It was reported that sales fell during January, seasonally adjusted. Non-seasonally January retail sales fall from December to January - it is the post Christmas recovery period. What wasn't reported was that the non-seasonally adjusted sales data was the best total sales data for the month of January ever. We had one of the best January Jobs Reports since 1981 before the data from 2015, 2016, and 2017 were revised. Instead of reporting an enthusiastic 452,000 seasonally adjusted workers being added to the economy it was reported that a ho-hum 196,000 workers joined the private sector this past January.We live in Reality. The government lives in Governmentland.

Why is the data as low as it is? This column has articulated the though that the record low level of full-time employees and the record, or near record, high levels of people working part-time jobs reduced the number of people who are eligible fr unemployment benefits. It was also speculated that the elevated levels of people working multiple jobs, especially multiple part-time jobs, meant that when someone lost one job they still had another job. There is no "lesser employed" insurance program other than having a second job. Seasonal jobs do not count toward the ACA employer mandate to provide insured for full-time workers. Remember that the requirement are based on full-time equivalent hours.

All of this data is interrelated. People need jobs to buy things in the stores. People need full-time jobs to qualify for mortgages, most f the time, in order to buy an existing home or a new construction home. New construction sales spur retail sales, especially in the Home and Garden, Furniture, and electronics and appliance sectors. First-time claims give an insight as to where we may be heading. Next week's continuing claims data will give us an indication on where the Jobs Report U-3 Unemployment data may be recorded.  Pay attention to the data, not the reports.